How and when did life emerge in the Universe? 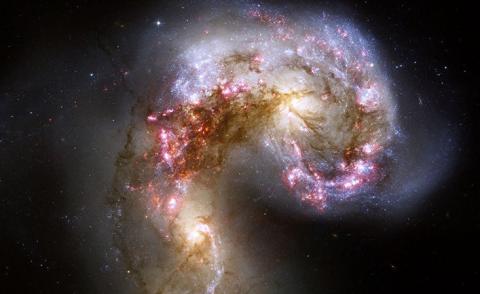 About 15 million years after the big bang, the entire universe had cooled to the point where the electromagnetic radiation left over from its hot beginning was at about room temperature. In a 2013 paper, I labeled this phase as the “habitable epoch of the early universe.” If we had lived at that time, we wouldn’t have needed the sun to keep us warm; that cosmic radiation background would have sufficed.

Did life start that early? Probably not. The hot, dense conditions in the first 20 minutes after the big bang produced only hydrogen and helium along with a tiny trace of lithium (one in 10 billion atoms) and a negligible abundance of heavier elements. But life as we know it requires water and organic compounds, whose existence had to wait until the first stars fused hydrogen and helium into oxygen and carbon in their interiors about 50 million years later. The initial bottleneck for life was not a suitable temperature, as it is today, but rather the production of the essential elements.

Given the limited initial supply of heavy elements, how early did life actually start? Most stars in the universe formed billions of years before the sun. Based on the cosmic star formation history, I showed in collaboration with Rafael Batista and David Sloan that life near sunlike stars most likely began over the most recent few billion years in cosmic history. In the future, however, it might continue to emerge on planets orbiting dwarf stars, like our nearest neighbor, Proxima Centauri, which will endure hundreds of times longer than the sun’s. Ultimately, it would be desirable for humanity to relocate to a habitable planet around a dwarf star like Proxima Centauri b, where it could keep itself warm near a natural nuclear furnace for up to 10 trillion years into the future (stars are merely fusion reactors confined by gravity, with the benefit of being more stable and durable than the magnetically confined versions that we produce in our laboratories).

As far as we know, water is the only liquid that can support the chemistry of life—but there is much we don’t know. Could alternative liquids have existed in the early universe as a result of warming by the cosmic radiation background alone? In a new paper with Manasvi Lingam we show that ammonia, methanol and hydrogen sulfide could exist as liquids just after the first stars formed and that ethane and propane might be liquids somewhat later. The relevance of these substances to life is unknown, but they can be studied experimentally. If we ever succeed in creating synthetic life, as is being attempted in Jack Szostak's laboratory at Harvard University, we could check whether life can emerge in liquids other than water.

One way to determine how early life started in the cosmos is to examine whether it formed on planets around the oldest stars. Such stars are expected to be deficient in elements heavier than helium, which astrophysicists call “metals.” (in our language, unlike that of most people, oxygen, for example, is considered a metal). Indeed, metal-poor stars have been discovered in the periphery of the Milky Way, and have been recognized as potential members of the earliest generation of stars in the universe. These stars often exhibit an enhanced abundance of carbon, making them “carbon enhanced metal poor” (CEMP) stars. My former student Natalie Mashian and I suggested that planets around CEMP stars might be made mostly of carbon, so their surfaces could provide a rich foundation for nourishing early life.

We could therefore search for planets that transit, or pass in front of, CEMP stars and show biosignatures in their atmospheric composition. This would allow us to determine observationally how far back in time life may have started in the cosmos, based on the ages of these stars.  Similarly, we could estimate the age of interstellar technological equipment that we might discover floating near Earth (or which might have crashed on the moon), based on long-lived radioactive elements or the extent of scars from impacts of dust particles on its surface.

A complementary strategy is to search for technological signals from early distant civilizations that harnessed enough energy to make them detectable across the vast cosmic scale. One possible signal would be a flash of light from a collimated light beam generated to propel light sails. Others could be associated with cosmic engineering projects, such as moving stars around. Communication signals are not expected to be detectable across the universe, because the signal travel time would require billions of years in each direction and no participant would be patient enough to engage in such a slow exchange of information.

But life’s signatures will not last forever. The prospects for life in the distant future are gloomy. The dark and frigid conditions that will result from the accelerated expansion of the universe by dark energy will likely extinguish all forms of life 10 trillion years from now. Until then, we could cherish the temporary gifts that nature had blessed us with. Our actions will be a source of pride for our descendants if they sustain a civilization intelligent enough to endure for trillions of years. Here’s hoping that we will act wisely enough to be remembered favorably in their “big history” books.