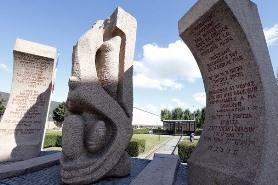 Two unusual events relating to Holocaust remembrance took place in the Arab world in December 2013: A first official conference on the Holocaust was held in Tunisia, dealing with Holocaust of the Jews of Tunisia, and the first visit by an Arab diplomat to a Holocaust memorial site, when Bahraini ambassador to France Nasser Al-Balushi visited a memorial in Drancy, near Paris.

The Middle East Media Research Institute (MEMRI) reports that on December 14, 2013, Tunisia held the Arab world's first official Holocaust conference. The two-day conference, attended by historians, clerics, authors, and journalists, dealt with the Tunisian Jewish Holocaust, and its purpose was to commemorate the 5,000 Tunisian Jews who were sent to labor camps or European death camps during the Nazi rule of the country.

During the conference, speakers praised Tunisian Muslims who helped Jews during the Holocaust, including Khaled 'Abd Al-Wahhab, who hid 20 Jews in his factory. The event was held under the auspices of the Tunisian Association to Support Minorities, as well as the Foundation for Ethnic Understanding, which works to bring religions, specifically Muslims and Jews, closer together. The president of the Association to Support Minorities, Yamina Thabet, said that "the conference aims to preserve the issue of the Holocaust in public consciousness... and ensure that a depraved act such as the Nazi Holocaust will never happen again in any form."

The event sparked harsh criticism from some elements in the Arab world, who claim that the Holocaust is a fabrication, and that these measures constitute normalization with Israel and 'a betrayal of the Palestinian cause'. The Arab Nationalist List organization, one of whose founding members is Ibrahim 'Alloush, the editor of the anti-Semitic website "The Free Arab Voice" and a board member of the Association against Zionism and Racism, published a communiqué stating that the Holocaust is "a legend" based on lies.

Referring to the statement by Yamina Thabet, the Arab Nationalist List's communiqué stated: "Her statement expose the Zionist objectives of disseminating the 'Holocaust' legends, which some Arabs believe. Most unfortunately, many have been ensnared and have adopted the claim that 'the Holocaust' actually happened. But what about the suffering of others who were not Jews?! Is it is permissible to exploit a lie that the Europeans allegedly committed in order to justify the violation of Arab rights?!"

The communiqué continued to bring alleged historical proof that the Holocaust was a fabrication. The communiqué also argued that commemorating the Holocaust in Tunisia was a normalization measure towards Israel and constituted "betraying the blood of our martyrs who gave their lives to liberate Palestine."

Bahraini daily Akhbar Al-Khalij, citing French news agency AFP, reported that on December 10, 2013, Bahraini ambassador to France Nasser Al-Balushi visited the Holocaust memorial center in Drancy near Paris. This was the first visit by a Muslim diplomat to the site, which was established in September 2012.

The visit was conceived by Jewish French author Marek Halter and the Imam of Drancy, Hassan Al-Chalghoumi. The Bahraini ambassador laid a wreath on the monument and said: "It is our duty to act together to combat any expression of intolerance and hatred. Bahrain is a Muslim country, but its laws enable coexistence with other religious groups. Alongside mosques, (Bahrain) has synagogues, churches, and (other) houses of worship." Bahraini MPs responded sharply to the visit. Bahraini MP Khaled Al-Maloud of the Al-Asala Islamic bloc said that the visit was "shameful" and did not represent the Bahraini people, who stands alongside the Palestinian cause and is proud of its Arab and Islamic principles.

He added, "Islam forbids harming innocents... But in today's world it is known that the so-called Jewish Holocaust is a lie and a deception whose disgraceful (nature) is clear to all, and which was meant to harm the rights of the Palestinian people and (facilitate) the theft of its lands. The real Holocaust is the one taking place against Palestinians in the West Bank, Gaza Strip and all the Palestinian territories, where they have been suffering killing, expulsion and uprooting by the Zionist gangs for close to 100 years."

Another Bahraini MP, Hassan Bokhamas, claimed in a similar vein that the visit contradicts basic Bahraini, Arab, and Islamic principles related to support of the Jerusalem and Palestine cause and the boycott of the Zionist entity,
"which harms the people, the land and the holy sites, and is toying with global public opinion in order to receive financial and moral support and cover up all the crimes against humanity that it is carrying out in Palestine."

He called on the government to act to correct the ambassador's mistake, which harms Bahrain's reputation on the Arab and Islamic level. According to him, "it is inconceivable to reward the occupation with any normalization or encouragement while it increases its crimes."

Reprinted with permission from the Tazpit News Agency.