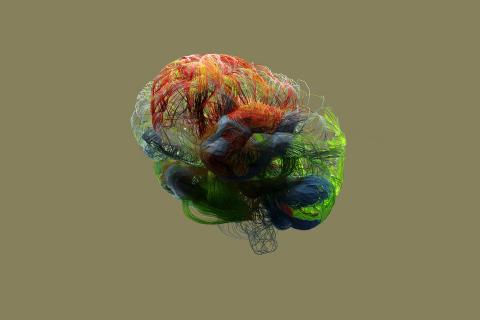 NEUROSCIENCE SHOULD BE the sexiest of the sciences. To study it is to study the very stuff that makes stuff studiable in the first place. Then you look at an fMRI scan and realize it’s all, actually, amazingly boring. This bit lights up when that thing happens—so what?

A functional map of the brain tells us almost nothing about what it feels like to be alive. Even certain neuroscientists have an axon to grind with this “objective,” “cognitivist” way of thinking. One is Mark Solms, and in his new book, The Hidden Spring, he doesn’t just talk about anatomy and electrochemistry—though there is some of that. He also puts forth an entire new theory of consciousness, sexed up with input from the original sexpert himself, Sigmund Freud.

Now, psychoanalysis is obviously a very sexy science. Possibly the absolute sexiest, and not just because Freud was fixated on all things libidinal. As a mode of thinking, it’s hugely satisfying, in a way neuroscience is not. You can psychoanalyze whatever you want, from a work of art to your best friend’s neuroses to the massive skyscrapers sky-raping our metropolitan airspaces. Universality is also, however, the theory’s greatest weakness. It’s too big. Too seductive. Too “wildly speculative” and concerned with “the subtleties of subjective experience,” as Solms writes.

Not that he cared. As a young neuroscientist in South Africa, Solms started out researching dreams, pretty much the definition of squishy subjectivity. This taught him two things: (1) You can study thoughts and feelings neuroscientifically, and (2) that’s exactly what Freud was trying to do. In fact, Freud once wrote that his ultimate intention was to “furnish a psychology that shall be a natural science”—meaning, a way to explain the mind in purely mechanistic terms. When Solms first read that, his neurons did backflips. As he says in Hidden Spring, “I hadn’t realized that Freud was a neuroscientist.”

Well, not quite. Freud wrote the above-quoted “Project for a Scientific Psychology” early in his career, in 1895, and never published it. Seems he panicked; the scientific tools and methods of his day weren’t up to snuff. So he’d snort snuff instead—and pivot to what Solms calls an “interim step.” In other words, to psychoanalysis: if not quite an objective science, then at least a way toward one. And just like that, Solms declares his own ultimate intention. He will do what Freud never could. He will science the shit out of psychoanalysis, and he will call it, smashingly, neuropsychoanalysis.

It’s a mostly legit discipline, these days, with a journal and an annual conference and all that, but it still floats far outside the establishment. “Like an astronomer associating with astrology,” Solms writes. Neuropsychoanalysis seems to attract the punkish interdisciplinarians, those thinkers who won’t be contained by the ridigities of their respective fields. But the thing about these rebel types is that, so much of the time, they’re the ones most capable of making the wildest leaps. Not the patient, incremental advances of everyday science, but the world-historical, paradigm-shifting transformations in global consciousness. Or, in Solms’ case, a new theory of consciousness itself.

Thus we get to the heart, or rather head, of Solms’ book. It’s really quite simple, though Solms is not the soothingest of writers. Here’s a representative sentence from the second half, where things heat up: “The good news is that the error signals with the highest precision values have the greatest influence over the generative model.” How that qualifies as good news, only Solms can know for sure, but it’s nothing compared to this, which comes a few pages later and should be printed on T-shirts for attendees of the annual neuropsycho-con: “What perception ultimately consists in is the computing of inferential statistics concerning the probability distributions of spike trains, and comparisons of such probabilities, all in a nested hierarchy of precision-optimizing homeostats.” Unglaze your eyes, dear homeostat. Just because Solms wants to make neuroscience sexier doesn’t mean he’s got Freud’s flair for the literary.

So yes, you’re the homeostat, a happy little organism just trying to maintain homeostasis, a basic comfort level of needs, in the big scary world. As for everything else in that sentence, it’s hard to know how much a “general reader,” for whom Solms claims to be writing, cares. Basically, Solms seems to think a step-by-step, information-theoretic breakdown is expected of him, a slight betrayal of his upfront promise to vitalize neuroscience. He spends multiple chapters on statistical physics, thermodynamics, and Karl Friston’s free energy principle, particularly as it relates to so-called Markov blankets. A Markov blanket is simply the barrier that separates you from the not-you. It senses your internal needs, and it can act on the external environment to address them. Any conscious being does this naturally. The question for Solms becomes: How? Where does consciousness come from? What’s it feel like to maintain your existence? His answer, again, is very simple, but also rather extraordinary, and the thing we’re actually here for: Consciousness feels like feelings.

Humans (and animals) have lots of feelings. Seven basic ones, some say, one of which, lust, stimulated Freud. But every emotion is a valid driver of experience. Say your back hurts from sitting all day at a desk. What makes you attempt to ease the ache, to restore vertebral equilibrium? The negative emotions associated with pain, for starters. Then a little anger at yourself for not treating your body better. Also, maybe a simple desire, which Solms would call “seeking,” to leave the house. The work of surviving, therefore, is “regulated by feelings.” And feelings, Solms says, are “about how well or badly you are doing in life.” They shape the way you respond to your needs.

To this, you might reasonably object: But sometimes, I feel least conscious, least in control, when I’m subject to my feelings. In fact, consciousness, in those situations, feels like the effort it takes to overcome feelings. Fair point, and the effort you’re talking about, it’s a form of rational decision-making, of higher-order thinking. Humans do it constantly, and it happens in your brain’s cortex, the big, outermost layer. That’s why brain researchers—before, including, and after Freud—have always identified the cortex as the seat of consciousness. But Solms, who calls this the “cortical fallacy,” points out a simple fact: Decorticate a rat, say, and you can’t immediately tell the difference. Or observe hydranencephalic kids. They’re born without a cortex, but they laugh, cry, and move through the world with what can only be called intentionality. Destroy the core of the brainstem, on the other hand, and consciousness vanishes. Automatic coma. And what does that core, specifically the bit known as the “reticular activating system,” the “hidden spring” of Solms’ title, control? “It generates affect,” Solms writes. Grief. Fear. Seeking. Rage. It controls feelings.

In a way, Solms’ answer to the centuries-old “hard problem” of consciousness, so called, is to make it less hard on himself. He pushes consciousness down a level, from thoughts to emotions. Or rather, he elevates emotions to the level, the dignity, of thought. You can’t think without feelings, whose emergence, in regulating our homeostatic states via Markov blankets, equaled the birth of consciousness. In conclusion, there’s nothing subjective—or “fictitious,” Solms writes—about emotions.

This last claim, oddly enough, is the book’s unsexiest slipup. Of course emotions are fictitious, in the best possible way. Look at science fiction, a genre that often addresses the question of consciousness head-on. A robot among humans is judged by one thing above all else: not its intelligence, or its physical prowess, but by how much it seems to feel. Some of them, the cold distant calculators, barely emote at all; others seem all but indistinguishable from their human companions, and those are the ones to which—to whom—we ascribe consciousness. Martha Wells’ deep-feeling Murderbot, for instance. Or Becky Chambers’ Sidra, confused in a human body. Then there’s Klara, in this year’s Klara and the Sun, by Nobel winner Kazuo Ishiguro. In it, an artificially intelligent “friend” is born, serves a human, and learns about emotions, those “impulses and desires,” Ishiguro writes, that often make her seem more human than the humans around her. It’s a strange book, with sentences as ugly, in their way, as Solms’, but it does what nonfiction, paradoxically, cannot. It makes theory real. To read Klara is to watch Hidden Spring come to life.

Not surprisingly, Solms spends his final chapter imagining the precise laboratory conditions by which his theory of consciousness could lead to artificial intelligence. If you plug in the right parameters and Fristonian equations, tiny dots on a screen could spontaneously self-organize in such a way that, with a few more manipulations and forced evolutionary procreations, might just lead to something that looks a lot like conscious awareness. It’s a neat, testable hypothesis, sure to excite new generations of neuroscientists or neuropsychoanalysts or neuropsychoroboticists, whatever, and Solms exhibits the right amount of humility and caution in exploring its implications.

But if he succeeds, who would it ultimately help? What other stories does his theory of mind tell? One finishes Hidden Spring, one of the worthiest efforts to come out of neuroscience in recent memory, with two general feelings: a sense of accomplishment, and a wish to return to the likes of Ishiguro and Freud, those cognitive theorists of a higher form, who’ve always known not only the source of our emotions, but how to help us live with them.