Herzliya Conference 2014:The future of the Middle East 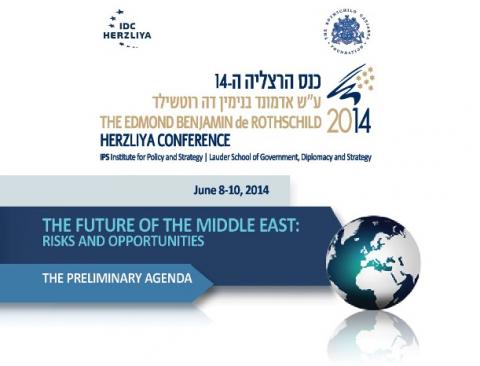 The 14th Annual Herzliya Conference will focus on the future of the Middle East and its implications for Israel’s national security and resilience. The tectonic shifts resulting from the global economic crisis and the Middle East regional turmoil have yet to settle. Producing a volatile strategic environment and wrecking havoc to the regional balance of power, these transformative trends warrant reflection on the future of the Middle East, exploring and assessing both risks and opportunities for Israel and the world.

Positioned in the eye of these ferocious storms, Israel needs not only to reassess its national security doctrine and the basic tenets of its foreign policy; to contend with the emerging regional challenges, Israel must engage in strategic thinking and planning that will also incorporate reinvigorating social resilience and entrepreneurship, and stimulating a sense of solidarity and social responsibility.

Convening shortly after the six-month timeframe for the P5+1-Iran negotiations and the nine-month timeframe for the US-led Israeli-Palestinian direct negotiations, the 2014 Herzliya Conference will be particularly timely to assess the future of the Middle East and Israel. Thus, the Conference will portray plausible scenarios and game-changing trends, explore risks and opportunities, assess alternative courses for managing the challenges, and develop new strategic directions.

Marking the 50th Anniversary of the Caesarea Edmond Benjamin de Rothschild Foundation and epitomizing its heritage and contribution, the Conference will address topical issues on Israel’s national agenda, including education, economy, and rejuvenating the spirit of pioneering and philanthropy fitting the 21st Century.

Herzliya 2014 will feature Israeli and world leaders of government, business, military, academia, and media. The Conference will be preceded by the work of more than a dozen specially commissioned senior taskforces assigned to authoritatively address the principal issues outlined in the Conference agenda and develop concrete policy recommendations. Taskforce reports will be deliberated by high-level moderated plenary sessions and Herzliya Roundtable discussions (some of which attended by special invitation only).

The 2014 Herzliya Conference program will officially commence on the afternoon of Sunday, June 8, and conclude on Tuesday evening, June 10. The program will include both plenary and "Herzliya Roundtable" sessions. Several "Herzliya Roundtable" sessions will be open only to EXECUTIVE or GOLD EXECUTIVE PARTICIPANTS or by personal and separate invitation. International participants are invited to join the Herzliya Conference’s field trip in cooperation with IDF to be held on Wednesday, June 11, 2014.