Guardian/Mixmag drug survey reveals a generation happy to chance it 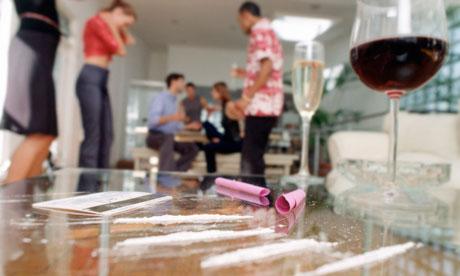 "My daily life is sensible, regimented and very stressful, so at the weekend I want the complete opposite," explained James, a financial broker. "When I go out, the last thing I want is to think about work and responsibilities. I just want to lose myself for a few hours."

Having a cocaine binge at the weekend followed by three or four diazepam to get to
sleep on Sunday messes up the brain's chemistry, a consultant psychiatrist says. Photograph: Corbis

The 25-year-old, who is at his desk in the City by 6.30am every day, takes a mix of MDMA, cocaine and the anaesthetic ketamine almost every weekend. He insists it does not affect his work and says the fallout from a weekend drug bender is little worse than a bad hangover. "I just personally enjoy it," he said. "It's not sitting alone in a room shooting up heroin, it's a social and enjoyable experience that I can balance with my working life."

Respondents to the Guardian/Mixmag drug survey – for which 15,500 regular users such as James revealed everything from their drug of choice to the amount they pay for a gram of cocaine – do not easily conform to drug user stereotypes. Predominantly white, educated, relatively healthy people with an average age of 28, they are neither in rehab nor prison and rarely touch heroin or crack.

But the survey exposes a generation of drug-users willing to take significant risks with their health. Many respondents admitted to taking cocktails of drugs, mixing drugs with alcohol, and taking "mystery" white powder with little or no knowledge of its content.

And while a significant majority – 76% – said they didn't need drugs for a good night out, a higher proportion – 86% – thought drugs could make a good night better. "I think most people view drug-users as dependent or weaker in some way," said Luke, 20, who works for a removals and storage business. "In fact, the users that I regularly spend time with – myself included – are hard-working and socially functional people, just like many non-users."

Despite a commonly professed happiness with their relationships and standard of living, there is evidence that younger drug-takers in particular are taking serious risks with their health.

Those under 25 were twice as likely to have taken a "mystery white powder" as older respondents, with 19% admitting to snorting or ingesting a substance without knowing what it was. Of the overall 14.6% of respondents who had taken an unknown white powder, a third took it from a stranger and 80% were already intoxicated when they took it.

Dr Adam Winstock, founder of Global Drug Survey, which analysed the Guardian/Mixmag data, said that while the majority of drug users were "not stupid", many were putting themselves in dangerous situations. "What worries me is that people's judgment is already impaired when they are taking a substance they don't know," Winstock said. "You are much more likely to run into trouble if you mix drugs, or mix drugs with alcohol – and if you are taking a drug you don't know from someone you don't know, that is really upping the risk."

Tanya, a 29-year-old who lives in Glasgow and works in the media, said the illicit nature of the drug scene made people more likely to take risks. "I think half the reason people are taking mystery powder is because of all this cloak and dagger stuff. If someone offers you something in a club, it's not like you can shout out and ask what it is, or how much you should take – you just lick your finger and stick it in."

Tanya described snorting what she thought was cocaine at a house party, only to be told it was ketamine. "Ketamine is a horse-tranquiliser and, to be honest, it makes you feel like a tranquilised horse," she said. "That was a bit of a wake-up call. The next day we all sat around saying: 'We are educated, sensible people – what were we playing at?'"

James had a more extreme reaction after taking a drug he believed was ketamine on a night out for his birthday. Unable to contact his usual drug dealer, he bought what he thought were pills and ketamine from someone he had not used before. "We took the stuff in the club and everyone went insane. It was horrendous – we were like complete zombies, just dribbling," he said. "We found ourselves out on the street a couple of hours later when we came around."

Yet James said that the group then went back to his house and, thinking the reaction had come from "dodgy pills", took more of the ketamine.

"We did a load more and went into freakout mode; no one could breathe and we didn't know how it was going to end," he said.

James later discovered his group had been sold methoxetamine – also known as MXE, Mexxy or Roflcoptr – a "legal high", ketamine-style chemical that has been tried by 5% of the survey's respondents. "It really put me off buying from a 'random'," said James. "Basically they can sell you anything and what are you going to do? You are never going to report a dealer."

MXE is in line to become the first drug to be made subject to a temporary class drug order, which would ban the substance for 12 months while further investigations are carried out – part of the government's attempts to stem a wave of new drugs available.

"The research chemicals available in the UK are diverse and fascinating," said David, a 21-year-old student . A self-confessed "enthusiast", he admitted using legal highs, including the psychedelic AMT, the stimulant 6-APB (benfamine) and MXE. Despite describing one experience on ketamine as "very oppressive – like dying and coming back to life", David said he had no qualms about trying out new chemical compounds.

"It's not for everyone, but it is actually quite hard to kill yourself," he said. "Of course there are risks, but you negate them by learning about the drugs – in the same way you wear a seat belt in a car. And for me, the risks are very much worth it."

John Ramsey, a toxicologist at St George's medical school in London, contrasted the increasing number of "legal" drugs on the market with the dearth of research into their short- and long-term effects. "It is amazing that so many people take mystery white powders," he said. "The truth is nobody knows what the risks of legal highs are, and it is patently dangerous to take untested drugs."

The debate about how to tackle legal highs rages on. There have been high-profile deaths linked to legal highs – such as the BZP-linked death of the 22-year-old mortgage broker Daniel Backhouse, who is thought to have also taken ecstasy – yet critics accuse the government of bowing to a media frenzy.

Maryon Stewart, whose 21-year-old daughter, Hester, died in April 2009 after taking the club drug GBL in combination with alcohol, warns that the risks of legal highs are real. "Young people are playing russian roulette with their lives and wellbeing," she said. "There are risks when you know what you are taking, which are multiplied when you don't know what you are throwing down your throat."

Stewart set up the Angelus Foundation, which aims to educate users of the risks of taking legal highs and other drugs, and she says that simply banning new drugs is not the answer. "The prime minister has said he will stamp out legal highs, but how? All the government is doing is banning them one by one, which is pretty much a waste of time. For young people, raising awareness and education is key," she said. Her foundation has launched a petition to encourage people to lobby the government to bring drug education on to the national curriculum.

Dr Les King, a chemist and former head of the drugs intelligence unit in the forensic science service, agreed. "The government wants to be seen to be doing something – but using the Misuse of Drugs Act to ban these substances is not the way forward," he said. "There are so many of them that we need a different approach."

The government banned mephedrone in March 2010 after reports linking the drug to deaths in the UK, such as 14-year-old schoolgirl Gabrielle Price in Brighton, although police later said she died from bronchopneumonia. And despite reports claiming mephedrone is more popular among clubbers than before it was banned, results from the Guardian/Mixmag survey suggest the ban could have had an impact. Usage has dropped among survey respondents in the past year – from 51% to 19.5%. Among regular clubbers it was down to 30%.

According to King, the "huff and puff" around banning drugs was obscuring the bigger problem: dependence on alcohol and tobacco. "Alcohol and tobacco are never put in the same league as drugs, but from a scientific point of view they should be," he said.

His concerns appear to be backed up by respondents' concerns – 36% said they would like to consume less alcohol, compared with 64% who wanted to cut down on tobacco, 17% who wanted to cut down on cocaine and 8% on MDMA, while 40% said that their friends' alcohol consumption caused them the most worry. As one regular drug user put it: "It seems everyone in the country drinks like a fish, from the Queen down, so I think drugs are the least of our worries."

The survey also suggests that many respondents are relatively unconcerned about breaking the law – 9.4% had been stopped and searched in the previous 12 months and 60% reported having drugs on them on at least one occasion when stopped. Of those that had been searched, 65% said police had failed to find the drugs they were carrying on at least one occasion. Of those found with MDMA, 37% were let off with only a telling off, as were 40% of those with cocaine and 49% of those with cannabis.

For many of the survey's respondents, there appears to be no pressing need to stop taking drugs. Tanya, who has never been in trouble with the police, is not worried about leaving drugs behind. "I used to say I'd give up when I was 30," said the 29-year-old. "I'm now thinking I might put that back to 40."

For James, the prospect of giving up drugs lies some way in the future. "My drug-taking and partying is a choice. I assume that one day I'll grow bored of it or not be able to balance it with other commitments I may have. But for as long as I continue to enjoy myself, I'll probably continue."