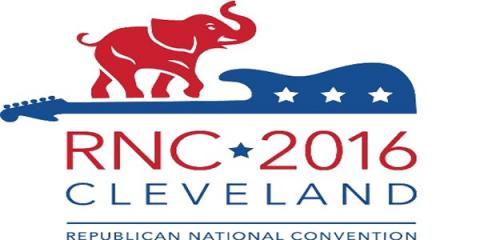 The attack on police officers in Baton Rouge, La., cast a grim mood over the opening of the Republican National Convention here, as Donald J. Trump responded to the killings with a stark warning that the country was falling apart.

A string of shootings targeting police officers, as well as the recent killings of two black men by police officers in Minnesota and Louisiana, had already pushed gun violence and social unrest to the center of the presidential campaign. Mr. Trump has campaigned on the theme of “law and order” since the assassination this month of five police officers in Dallas, and he is likely to amplify that message in the coming days.

Within hours of the killings on Sunday, in which three law enforcement officers were fatally shot and several others were wounded, Mr. Trump declared that the nation had become a “divided crime scene” and said that the Islamic State was watching as Americans murdered police officers. After President Obama issued a call for calm, Mr. Trump jabbed on Twitter that Mr. Obama “doesn’t have a clue.”

The presumptive Republican presidential nominee has long battled criticism of his volcanic temper and questions about his temperament and readiness for the presidency, and it was unclear if a thunderous response to the shooting in Louisiana will help allay voters’ concerns. While Republicans often run on law-and-order themes, an indelicate approach could carry considerable danger at a moment of such unusual political instability.

In Cleveland, the killings of the police have set a tense atmosphere for the convention: Well before the bloodshed in Baton Rouge, organizers were preparing extensively for mass demonstrations and potential unrest. “This has got everybody on edge,” said Tony Perkins, a former state legislator from Baton Rouge who is the leader of the Family Research Council, a conservative group. “The nation is in shock. If it were an isolated incident, probably not so much so, but this is the second in two weeks.” Anxiety about security in Cleveland grew throughout the day on Sunday, as an official with a police union in the city urged Gov. John Kasich, a Republican, to enact restrictions on gun rights around the convention zone as an additional safety precaution. Mr. Kasich’s office rejected the idea as legally impossible.

Roger F. Villere Jr., the chairman of the Louisiana Republican Party, said word of the attack in Baton Rouge early Sunday had sent a shudder through the state’s delegation in Cleveland. Mr. Villere, whose party office is in Baton Rouge, said he had been attending church on Sunday morning in suburban Mayfield, Ohio, when text messages and phone calls began pouring into his phone.

Many members of the Louisiana delegation had close ties to law enforcement, Mr. Villere said, and they would seek to put together a memorial event or moment of prayer this week. A sense of loyalty to law enforcement has pervaded the convention: On Saturday night and on Sunday in Cleveland’s Fourth Street district, restaurant patrons seated on the sidewalk repeatedly broke into applause for the phalanxes of police officers who filed down the street on foot and on bicycles.

And the convention was likely to begin with a trumpeting of support for police officers. Convention organizers said on Sunday that the theme of the first day, Monday, would be “Make America Safe Again.” Jeff Larson, the convention’s chief executive, said in a news conference that a leading speaker would be Rudolph W. Giuliani, whom he described as “the law-and-order mayor of New York.” Mr. Giuliani has been a forceful critic of the Black Lives Matter movement and has been outspoken in his defense of law enforcement practices over the last few weeks.

Mr. Trump was not slated to speak until later in the week, but on Sunday he embraced even more tightly a dire message about social disorder. After spending the first part of the day lobbing insults at his political rivals through social media, Mr. Trump abruptly shifted his posture after the attack in Baton Rouge, dropping his customary complaints about television news coverage and taunts directed at Hillary Clinton and Elizabeth Warren. In an afternoon message posted to Facebook, Mr. Trump expressed grief over the loss of life. Without elaborating, he said the violence stemmed from a national leadership vacuum. “How many law enforcement and people have to die because of a lack of leadership in our country?” he said. “We demand law and order.” After the release of a carefully worded statement, Mr. Trump shared words of hot anger on Twitter, saying that the country was “divided and out of control.”

In downtown Cleveland, security precautions were everywhere: Tall metal barriers lined the roads around the Quicken Loans Arena, where Mr. Trump was scheduled to receive the Republican nomination on Thursday. With only light afternoon traffic in the vicinity of the convention, police officers and Secret Service agents seemed on some corners to outnumber pedestrians.

The first protests on Sunday were relatively subdued. In one park in eastern Cleveland, about 100 protesters gathered — alongside nearly as many members of the media — from groups that included Black Lives Matter, Code Pink and a pro-Palestinian organization. Cleveland has assigned about 500 police officers specifically to handle the convention, and it has brought in thousands more officers to help, from departments as distant as California and Texas.

But some local officials have expressed concern about the possibility of violence owing to Ohio’s open-carry gun laws. Though demonstrators and others in the convention district have been barred from possessing a range of items, including gas masks, there was no prohibition on the brandishing of firearms. On Sunday, the president of Cleveland’s police union called for additional measures to protect the security of the event, and urged Mr. Kasich to suspend open-carry gun rights. The governor’s office said Mr. Kasich did not have “the power to arbitrarily suspend federal and state constitutional rights or state laws.”

There was little evidence of firearms around the convention center, though journalists swarmed a lone man, Steve Thacker, who wandered into Public Square, a few blocks away, with a semiautomatic rifle strapped to his back and a handgun at his side. In addition to Mr. Giuliani, the Trump campaign and convention organizers have announced the names of several prominent convention speakers who were closely identified with law enforcement. Among them was David Clarke Jr., the sheriff of Milwaukee County, Wis., and an ardent advocate for gun rights, who will speak on Monday.

Gov. Chris Christie of New Jersey, who ran for the Republican presidential nomination on his own law-and-order message, was also scheduled to speak. But in Baton Rouge, Woody Jenkins, the Trump campaign’s state chairman in Louisiana, said he was unsure how closely the national political debate would touch the community. Mr. Jenkins, a newspaper editor and local Republican leader, said he had seen a “tremendous outpouring of brotherhood” in Baton Rouge over the past few weeks, and little mention of the presidential race.

Mr. Trump’s “message of supporting law and order, I think, is a good one,” Mr. Jenkins said. “And I think the message of, ‘We want justice and peace,’ from a lot on the Democratic side — that’s good as well. Why can’t we have both?”