God and the Devil live in different parts of the brain 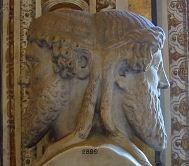 A neuro-imaging study shows that personal values that people refuse to disavow, even when offered cash to do so, are processed differently in the brain than those values that are willingly sold. “Our experiment found that the realm of the sacred – whether it’s a strong religious belief, a national identity or a code of ethics – is a distinct cognitive process,” says Gregory Berns, director of the Center for Neuropolicy at Emory University and lead author of the study. The results were published in Philosophical Transactions of the Royal Society.

Sacred values prompt greater activation of an area of the brain associated with rules-based, right-or-wrong thought processes, the study showed, as opposed to the regions linked to processing of costs-versus-benefits. Berns headed a team that included Emory economist Monica Capra; Michael Prietula, a professor of information systems and operations management at Emory's Goizueta Business School; a psychologist from the New School for Social Research and anthropologists from the Institute Jean Nicod in Paris, France. (Click here to see the full list of names.) The research was funded by the U.S. Office of Naval Research, the Air Force Office of Scientific Research and the National Science Foundation.

The researchers used functional magnetic resonance imaging (fMRI) to record the brain responses of 32 U.S. adults during key phases of an experiment. In the first phase, participants were shown statements ranging from the mundane, such as “You are a tea drinker,” to hot-button issues such “You support gay marriage” and “You are Pro-Life.” Each of the 62 statements had a contradictory pair, such as “You are Pro-Choice,” and the participants had to choose one of each pair.

At the end of the experiment, participants were given the option of auctioning their personal statements: Disavowing their previous choices for actual money. The participants could earn as much as $100 per statement by simply agreeing to sign a document stating the opposite of what they believed. They could choose to opt out of the auction for statements they valued highly.

“Most public policy is based on offering people incentives and disincentives,” Berns says. “Our findings indicate that it’s unreasonable to think that a policy based on costs-and-benefits analysis will influence people’s behavior when it comes to their sacred personal values, because they are processed in an entirely different brain system than incentives.”

Research participants who reported more active affiliations with organizations, such as churches, sports teams, musical groups and environmental clubs, had stronger brain activity in the same brain regions that correlated to sacred values. “Organized groups may instill values more strongly through the use of rules and social norms,” Berns says.

The experiment also found activation in the amygdala, a brain region associated with emotional reactions, but only in cases where participants refused to take cash to state the opposite of what they believe. “Those statements represent the most repugnant items to the individual,” Berns says, “and would be expected to provoke the most arousal, which is consistent with the idea that when sacred values are violated, that induces moral outrage.”

The study is part of a special issue of the Philosophical Transactions of the Royal Society, titled “The Biology of Cultural Conflict.” Berns edited the special issue, which brings together a dozen articles on the culture of neuroscience, including differences in the neural processing of people on the opposing sides of conflict, from U.S. Democrats and Republicans to Arabs and Israelis.

“As culture changes, it affects our brains, and as our brains change, that affects our culture. You can’t separate the two,” Berns says. “We now have the means to start understanding this relationship, and that’s putting the relatively new field of cultural neuroscience onto the global stage.”

Future conflicts over politics and religion will likely play out biologically, Berns says. Some cultures will choose to change their biology, and in the process, change their culture, he notes. He cites the battles over women’s reproductive rights and gay marriage as ongoing examples.