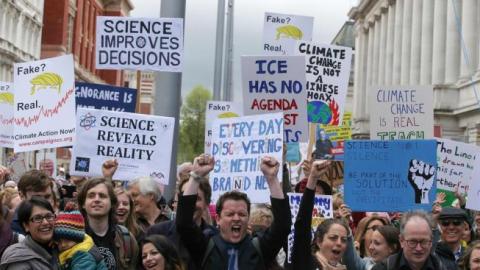 Hundreds of global protest marches in the name of science kicked off in Australia and New Zealand on Saturday, ahead of large crowds expected across the US. Tens of thousands of scientists are this weekend rallying around the world in a rebuke of Donald Trump’s dismissal of climate science and attempts to cut large areas of scientific research.

More than 600 marches, largely concentrated in the US, Europe, South America and Australia, began amid warnings from organisers that science is “under attack” from the Trump administration. Placards demanded “science not silence”, declared “there is no plan b”, and offered support from “florists for research-based legislation”, showing the crowd was not restricted to those in scientific community.

Chants asked what people wanted? “Science”, the marches bellowed. When? “Following peer review.” Wellington in New Zealand, was one of the first marches to start, with protesters gathering on the waterfront and waving signs calling for action. Similar crowds gathered in Auckland.  In Sydney, hundreds gathered at Martin Place in the centre of the city and walked to Hyde Park. Speakers included Dr Angela Maharaj, lecturer at the University of New South Wales Climate Change Research Centre, and former Liberal party leader, Dr John Hewson, who told the crowd politicians’ ignorance of climate change was “an embarrassment beyond belief”.

Australian scientists and supporters flocked to 12 national events, including Brisbane, Canberra, Hobart, Adelaide, and Melbourne. “It is very important that the March for Science is a community-led march; it’s a statement that is coming from the community,” professor Stuart Khan, an organiser of the Sydney march, told the ABC. “It’s not led by the academics, it’s not led by eminent scientists because it’s not about them, it’s about the community saying: ‘This is what is important to us’.”

In Melbourne, immunologist and nobel laureate Prof Peter Doherty called for a price on carbon. A preview of his speech on Friday said there were “major threats to the global culture of science” in today’s world. “Why? A clear understanding of what is happening with, for example, the atmosphere, oceans and climate creates irreconcilable problems for powerful vested interests, particularly in the fossil fuel and coastal real estate sectors.” Small crowds also gathered in Tokyo and South Korea’s second biggest city of Busan.

The marches, which take place on Earth Day, come one week before the Peoples Climate March, a series of large-scale climate change events that will be more overtly political. “The March for Science and the Peoples Climate March go hand-in-hand,” said Dr Geoffrey Supran, an expert in renewable energy at Harvard University. “Because attacks on science don’t just hurt scientists, they hurt scientists’ ability to protect the people, and climate change epitomises that. When politicians cater to fossil fuel interests by denying the basic realities of climate science and pursuing anti-science climate policy, they endanger the jobs, justice, and livelihoods of ordinary people everywhere.”

The global March for Science movement was not specifically directed at Trump, but he has proved to be a catalysing force, honorary national co-chair of the group, Lydia Villa-Komaroff, a molecular cellular biologist said last week. “There seems to have become this disconnect between what science is and its value to society,” she said. “Fundamental, basic science really underlies all of modern life these days. We have taken it so for granted.”

In the US, the main march in Washington DC will see thousands of protesters converge on the national mall decrying attempts to slash funding for basic government research into cancer, climate change, forensics and other areas. Scientists have also been perturbed by the Trump administration’s attempts to sideline or ignore research and by repeated gaffes by key Trump appointees, such as Environmental Protection Agency administrator Scott Pruitt, who denied that carbon dioxide is a key driver of global warming.

Ayana Johnson, a marine biologist and march organiser, said Trump’s policies have been “horrifying” but added that the hundreds of companion marches around the world showed there is a “global trend of anti-intellectualism” where politicians reject evidence-based policymaking in favour of playing to voters’ base emotions. Some scientists have criticised their colleagues for throwing themselves into the political fray by openly touting the benefits of science in front of the White House. But Bill Nye, a well-known science communicator in the US, said scientists are in a “dangerous place” and must speak out. “Science has always been political but we don’t want science to be partisan,” he told the Guardian. “Objective truths have become set aside and diminished and lawmakers are acting like a strong belief in something is as valid as careful peer review.”