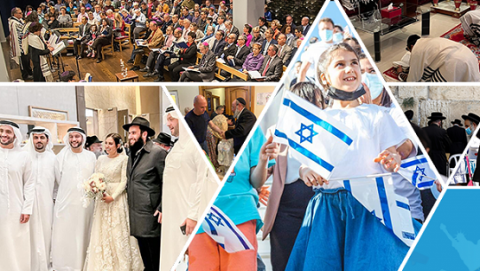 About 7,080,000 Jews live in Israel, making up 46.2% of world's Jewry; Jewish state sees its most prolific year in terms of positive immigration in two decades, in large part due to Russo-Ukrainian war. On this Jewish new year, world Jewry numbered around 15.3 million people, the Jewish Agency said in a report published on Sunday, a slight uptick from last year's 15.2 million.

According to the report, around 7,080,000 Jews live in Israel (compared to about 6,950,000 in the previous year), while another 8.25 million are living in the Diaspora, about six million of which live in the United States alone.

Israeli Jews make up 46.2% of the world's entire Jewish population, a 1% increase compared to the previous year. Data show that there are currently around 500,000 people living in Israel who are entitled to Israeli citizenship under the Law of Return despite not being registered as Jewish in the Population Registry.

This number also includes anyone defining themselves as Jewish and doesn't have any other religious affiliation, but excludes those who define themselves as "part Jewish". The Law of Return gives Jews and their relatives the right to come and live in Israel, granting them automatic citizenship.

According to the Jewish Agency, there are 25.5 million people worldwide eligible to get Israeli citizenship under the law, 18 of which live outside the Jewish State.

According to the Jewish Agency, Israel has seen its most prolific year in terms of positive immigration in two decades.

From September 1, 2021, to September 1, 2022, 26,000 Jews made Aliyah from Russia; 14,000 from Ukraine, most of whom arrived in the Jewish state in Jewish Agency rescue missions following the outbreak of the war between the two Eastern European neighbors.

Meanwhile, about 3,800 Jews made Aliyah from the United States and Canada, over 2,500 from France, more than 1,600 from Belarus, about 1,450 immigrants from Ethiopia were reunited with their relatives in Israel, 1,100 Jews arrived from Argentina, 600 from the United Kingdom, over 500 from South Africa and more than 400 from Brazil.

The Jewish Agency's data also indicates that over a quarter of this year's immigrants (27%) were aged between 18-35 and a total of 15,000 young people have decided to build their future in Israel. About 5,500 of them joined special programs provided by the Jewish Agency, which help them integrate into Israeli society and find proper employment.

President Isaac Herzog congratulated the Jewish people in Israel and the Diaspora on the occasion of the New Year and said: "Dear sisters and brothers from all over the world Jewish communities big and small Shanah Tovah to all of you!

As we welcome the Jewish New Year 5783 I would like to wish you all a sweet and happy New Year Our ancient Jewish tradition wisely connects the change of seasons with our changes of heart. Indeed, this twilight time between years invites us to embrace change as a people and as individuals.

It invites us to reflect on our lives our choices, and our beliefs, it invites us to question how we can do things better in the coming year for ourselves, for our families, and for our communities. It demands we deepen our attention, and even more so, our intention to replace bitterness with sweetness.

Let us debate with compassion disagree without fear and work towards each other, rather than away from each other, let us recall the beauty in our unity, only thus may we fulfill the words of the Psalmist, King David.

May there be peace within our walls and security within our citadels for the sake of my brothers (and I add, sisters) and friends. I say: Peace be with you! From your home away from home here in the State of Israel to your homes around the world, I wish you all, Shana Tovah U'Metukah!"