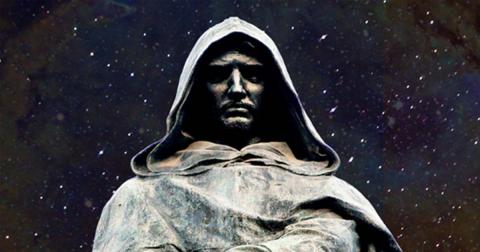 In April, SpaceX will launch a Falcon 9 rocket carrying NASA’s Transiting Exoplanet Survey Satellite. It will detect new exoplanets. Astronomers believe that innumerable such worlds exist. Already, more than 3,700 exoplanets have been discovered, especially by the Kepler Space Telescope. Ironically, every exoplanet confirms not the cosmology of Kepler, but of Giordano Bruno, the Italian philosopher who was burned alive in Rome, in 1600, as a heretic.

As a history professor, I investigate historical myths. But I couldn’t debunk one: that the Roman Inquisition condemned Bruno partly because of cosmology. Historians insisted it wasn’t true, but were they right? It’s an explosive topic in the alleged conflict between Christianity and science. Scholars defuse this bomb by saying Bruno was no scientist and that the Inquisition condemned him for religious transgressions, not cosmology. The Catholic Encyclopedia takes the same position, stating that “Bruno was not condemned for his defense of the Copernican system of astronomy, nor for his doctrine of the plurality of inhabited worlds.”

Likewise, historian Frances Yates declared: “the legend that Bruno was prosecuted as a philosophical thinker, was burned for his daring views on innumerable worlds or on the movement of the Earth, can no longer stand.” Similarly, historian Michael Crowe dismissed the “myth that Giordano Bruno was martyred for his pluralistic convictions.”

Not everyone agrees: In 2014, millions of people watched the first episode of the updated version of Carl Sagan’s Cosmos, in which Neil deGrasse Tyson declares that Bruno courted danger when he insisted on the existence of innumerable planets. “The penalty for doing so in his world,” Tyson says, “was the most vicious form of cruel and unusual punishment.” Many critics complained. Without having even read Bruno’s books, many bloggers echoed the popular sentiment that he was a mystic Hermeticist whose temperament and blasphemies led to his death.

To be sure, the Inquisitors didn’t condemn him for believing in Copernicus. But Bruno’s belief in Earth’s motion annoyed them—years before they admonished Galileo for the same thing. In 1597, the Inquisitors censured Bruno’s claim that Earth moves. His theory of planetary star systems, which he called “innumerable worlds,” also appears in the extant trial records. Expert historians denied that this amounted to heresy, however. In 2002, for example Bruno historian Leen Spruit argued: Bruno's belief in many worlds was not “formally heretical,” but was maybe “erroneous,” “scandalous,” or “blasphemous.” That was bad, but heresies were worse.

But when I examined old treatises on heresies and canon law, I learned otherwise. In fact, in the 1590s Bruno’s claim was considered heretical. Many authorities denounced it, including theologians, jurists, bishops, one emperor, three popes, five Church Fathers and nine saints. In 384 A.D. the belief in many worlds was categorized as heretical by Philaster, Bishop of Brescia, in his Book on Heresies. This condemnation was echoed by subsequent authorities, including Saints Jerome, Augustine and Isidore.

Moreover, it was heretical according to the highest authority. In 1582 and 1591, Pope Gregory XIII’s official Corpus of Canon Law included this heresy: “having the opinion of innumerable worlds.” The Canon embodied the laws of the Catholic Church: all inquisitorial and church courts obeyed it.

By analyzing all accusations, I found that the Inquisition’s strongest case against Bruno was, in fact, and contrary to the conventional wisdom, his belief in many worlds. It was the most frequently recurring charge. For example, one accuser testified that in prison one night Bruno brought a fellow prisoner “to the window and showed him a star, saying that it was a world and that all the stars were worlds.”

Thirteen times, in 10 depositions, six witnesses accused Bruno of believing in many worlds. No other accusation was invoked even half as much. Three witnesses said that Bruno denied transubstantiation, but this transgression was hardly worthy of death, because the Pope had ordered that Lutherans in Rome should be treated well. Besides, Bruno testified that he believed in transubstantiation. Bruno insisted that alleged blasphemies were slander. He emphatically agreed with Catholic doctrines.

He believed in ideas we reject: that Earth is a living animal with a soul. Nonetheless, some famous Copernican scientists believed that too, including Kepler and William Gilbert.

Inquisitors asked whether Bruno doubted Mary’s virginity or whether Jesus faked miracles with magic. Bruno denied that, and he never said such things in his writings. Yet in nine books Bruno did assert his cosmology of many worlds. It was one of 10 propositions the inquisitors censured: “Again,” they wrote, “he posits many worlds, many suns, necessarily containing similar things in kind and in species as in this world, and even men.”

In 1597, Bruno was confronted by inquisitors, including  the authoritative theologian Robert Bellarmine. Bruno “was admonished to thus abandon his delusions of diverse worlds.” Nineteen years later, Inquisitor Bellarmine would go on to confront Galileo.

In at least four depositions, Bruno refused to recant, insisting: Earth is a star (an archaic term for any heavenly body), and the stars include innumerable worlds. Inquisitors then confronted Bruno: “About this reply he was interrogated in the 17th Deposition, but does not seem to satisfy, because he relapsed into the same reply.” According to inquisitorial manuals, to relapse was to be a heretic.

When Bruno was executed, a witness named Gaspar Schoppe penned two letters noting Bruno’s belief in worlds four times. Schoppe used the wording in which it was categorized as a heresy in Latin: mundos esse innumerabilis.

Why did Catholics view this as heretical? Theologians explained: “we cannot assert that two or many worlds exist, since neither do we assert two or many Christs.”

Bruno was condemned for several heresies, but the one about multiple worlds was the strongest case against him. He didn’t defend an esoteric belief in immaterial worlds. Instead, he asserted parts of our cosmology: our acentric universe has innumerable suns, surrounded by planets, even some that may resemble our inhabited Earth.

Bruno said he inferred the existence of worlds from God’s omnipotence: by having infinite power God made innumerable worlds. Ironically, Bruno’s soaring view of the cosmos—more correct than Copernicus—stemmed from religious beliefs.