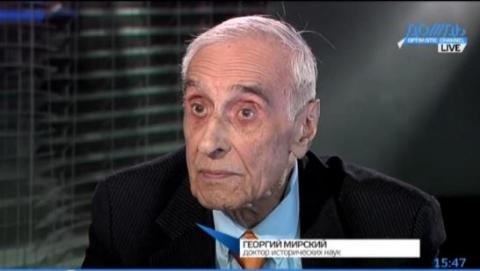 Georgy Mirsky has passed away - an outstanding orientalist, expert of great knowledge and experience, who always combined high academic professionalism and adherence to principles, a strong civic position and accuracy of the analysis. Despite the advanced age and inevitable diseases Georgy Mirsky continued to work till the last day and did not reduce his activity.

Valdai Discussion Club had the good fortune to work closely with Georgy Mirsky. Last summer his last academic work was published - fundamental research of the aggressive Islamism origins. This work is a kind of testament of the scientist, it does not lose its relevance and importance for future generations of orientalists not only as a source of knowledge, but also as a model for emulation.

The death of Georgy Ilyich Mirsky is an irreparable loss. We lost a great scientist, great teacher, professor of the Higher School of Economics, favorite of students, a brilliant man. His understanding of the Arab East, based on deep knowledge, combining bright mind, talent and intuition allowed him to judge unmistakably the most difficult twists and turns in the region, which he knew and loved. But not only. He was a prominent Americanist and understood international relations in general.

Until the last day he persistently tried to share his knowledge and experience by publishing interesting articles, making brilliant speeches. I can't remember that he was wrong in his assessments. Great happiness and privilege for me was a simple human and intellectual contact with this remarkable man, who radiated optimism and faith in reason.

Georgy Mirsky has passed away, but he will stay with us thanks to great knowledge that we have absorbed from him, by memories of him and the time, best representative of which he was.

It was in 1970, when I began to work in the Institute of World Economy and International Relations, that I first met Georgy Mirsky. He was already a legendary man, a brilliant analyst and an excellent lecturer. His aristocratic looks and tasteful dressing alone made him special, and when he started speaking, his audience was carried away.

He had a profound knowledge of the Middle East, the Arab culture and history, and spoke several foreign languages. Up till now, many in Russia see the Middle East through his eyes, come to know the Arab world through his books and popular articles – and not the Middle East alone. Professor Mirsky was always unequivocal in his approaches to many complicated issues of modernity. He was steadfast in his views, shaped in the course of his life, which was full of hardship.

For the Soviet era, he was too independent in his judgements. Soviet bureaucrats were uncomfortable with him and did their best to prevent him from going abroad. Back then, a student of other cultures and nations could never go there in his or her lifetime – and that was seen as a norm.

It all changed in the early 1990s and Mirsky taught extensively in foreign universities, published numerous articles, was a welcome guest at many conferences and forums. After many stolen years, injustices and underestimation he did become a worldwide known scholar. But he never gave up and, moreover, helped his younger colleagues not to break down. We had the privilege to be near him and for us, he will remain forever young.