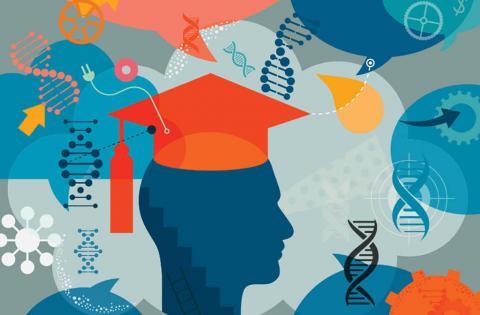 One of the ways you can think about this is to consider the idea of heritability. That’s a bit of a technical term, but what heritability means is the extent to which variation in a trait, like intelligence, like artistic ability, like sporting ability, or something like height. The extent to which variation is predicted or explained by genetic similarity. So, one of the ways that psychologists, behavior geneticists would investigate this idea would be to look at the similarity in a trait, let’s say height, between different members of the family. Let’s say you have a family with identical twins, they’re genetically identical, you could see how similar their height is and maybe very often they’re quite similar in height. And then you could just look at the regular siblings within the family, there are only 50% genetically similar on average so that they’re less genetically similar. And then you see how similar their height is. Maybe their height isn’t quite as similar as the identical twins’. The extent to which the identical twins, their height is more similar than the heights of siblings, that makes you think that genetic similarity is important in determining height. You can do some maths here, you can put some numbers on this. Heritability is a proportion, let’s say that the proportion of variation in height. How much of that is coming from genes? With height it’s something like 80%. So, 80% of how tall a child is going to grow, you can probably estimate by looking at the height of their parents. 20% – that’s coming from environmental sources, maybe something like nutrition, for example.

Well, you can do exactly the same thing with education. Let me give you an example of a study that was run in the UK on a big sample of twins, and here the comparison was between identical twins and non-identical twins. This was study by Eva Crapple and her colleagues, and it was looking at the examination results of 16-year-olds across a range of topics. They used the same way of assessing heritability and it turned out that exam results were about 60% heritable. About 60% of the variation in how well you do in exams seems to come from your genes. You may say to yourself: “Well, that’s just intelligence”, right? And everyone knows intelligence is like 50%-75% heritable. Well, the researches there attempted to control for that statistically, what they also did was measure some other things, some other abilities that seemed often to correlate with educational achievement. So, they measured the children’s personalities, they measured their health, they measured their well-being. They asked the parents to fill in questionnaires about whether the children showed any behavioral problems. Some of these things show some correlation, some ability to predict an educational outcome. It turned out all of those measures were highly heritable as well. Indeed, that set of measures, quite apart from intelligence, could explain the heritability of examination results, as much as intelligence itself. It doesn’t look like this is all about genes for intelligence.

There was a follow-up study by a related group of researchers, a study where the lead author was Callie Rimpfel. She broke down the individual topics. Let’s have a look at maths and art, and science, and business studies. Let’s have a look about the heritability in those, let’s try and take intelligence out of it, so we’ll just look at differences there. What you can do in that kind of studies to try and work out whether the genetic effects there, are they same or whether they’re different for the different topics. Do you find genes for science and genes for art – they’re separate genes. And the findings were that heritabilities were still pretty high: 40% to 60%. There wasn’t a lot of difference between the different subject areas, but it looked like it was the same genes. There were some general genes making you good at education.

I think it’s important to step back a little here and say: “What are these genes?” All we’ve done is we’re making inferences that it’s genetic influence based on the similarity between identical and non-identical twins. But, actually, we know that genes are regions of DNA and they’re stuck in the nucleus of cells, and they’re irresponsible for producing proteins or for regulating other genes producing proteins. How is it the protein production in the nucleus of biological cells is having an effect on educational achievement? That’s a really complicated question, and we’re some decades, perhaps, away from understanding the detail of the answers to that. We know what the explanation will look like eventually, it’ll be in the details of biological development and cognitive development, and the kinds of interactions that children have with the environment on multiple levels. The biological environment, the physiological environment within their bodies, the physical environment they react, interact with the social environment that they’re in. And often that environment is specified by the child itself in these dynamic interactions.

It’s a complicated story, somehow genes are influencing that trajectory of development, but what you can do is you say: “Let’s go right down to the low level of the DNA”, and we know that human DNA most of it’s the same – that’s what makes us humans, but in the letters of the DNA there’s some variation we find in populations, and we can correlate variations in DNA, all the way across the genome, so maybe at a million letters we can see how they’re varying and we can see what variation correlates with outcomes, say differences, in educational achievement.

Another study, a big study carried out on 120,000 individuals, to get a sample that big, and they took a very broad measure: how many years did you spend on education? And what they showed was you can’t really find much. The predictive power of the DNA itself, variation of DNA in educational outcome, the effects were really small, the correlations were really small. The only way you could even detect those correlations they did find some was by testing very, very large samples. What tells us is variations in many, many genes together that is producing variations in educational outcome. And they take that there are puzzles, there are mysteries there because the correlations that were detected between DNA variation and educational achievement, they only really explained 2% of the variation in educational achievement. But we know the heritability of what runs in families, as it was, is about 40%, so, using this method of looking at family similarity, we think that genes are responsible for 40% of the variation, but when we directly try and measure it, we can’t explain anything like that.

There’s interesting what we can do with that, when those DNA markers of variation were taken and applied to another sample, this was a sample of adults, where there was a much longer lifespan trajectory and you could see what events happened to those individuals over their lifespan, this was a sample in New Zealand. It turned out that those regions of DNA variation that were going to predict how well you would do at school, they also predicted things quite apart from education, for instance, your levels of economic achievement: how much you would earn? There were some interesting correlations: if the DNA, say, predicted you’d be better at education, it turned out that you were more likely to be in a better-off family. The third thing that this study revealed was that having better DNA for educational outcomes, it didn’t predict that everything was going to be better. Some of those individuals with the good DNA for education, they weren’t any happier and they weren’t any healthier. So, we have this curious mix of genes having general effects for education across different subject areas, but not so general that it leads into other areas of their life, it may affect their earnings, eventually a success in life, but, apparently, not their happiness, apparently, not necessarily their health.

So, we’re left with some puzzles. I think there when you start applying the idea of genetics to education, there are some questions you need to take on board. Many educators I talked with, when you say genetics, they go: “Oh, that’s such a deterministic and reductionist view of our children.” And I wanna make it really clear in talking about genetics and education. This is not saying that just because there’s an influence from genes that that outcome is determined. Indeed, part of what we’re doing in studying genetics is to understand what environments can change educational outcomes.

So, I’ll give a couple of examples. One of them I’ll make up, but the one that is real data, is you can find the intelligence, it’s quite highly heritable, I talked about that earlier, but if you look at samples drawn from quite poor backgrounds, the heritability goes down. So, in those individuals, even they have a good genetic potential to do well, they’re held back by their poor environment. In that case, the high heritability of the strong genetic effect on intelligence in another environment, environment with fewer opportunities, the genetic effect disappeared. The second example, that I’ll make up, is it’s easier to understand this in the field of medicine, that’s the similar use of genetics to understand how better to treat individuals, but let’s say I’d tested someone’s DNA and I could say to them: “You know, based on your DNA I can tell, if you get a headache, you should be taking ibuprofen and not paracetamol and that’s just due to your physiology ”, or I could say: “You’re middle-aged now, given your physiology, you really should be doing some exercise because your arteries might clog up.” I could say to someone else: “I’ve checked your DNA and, you know, you’ve got really good DNA repair mechanisms, you can smoke if you want to, it won’t cause any problems.” In all of those instances what I’m doing is looking at the DNA and making claims about what environments will be best for you: the best way to treat a headache, the best way to maintain health and fitness in the middle age.

What we’re doing in studying DNA is to try and understand the environments that give best outcome and in the context of education, it’s an attempt to understand the ways children will learn best, or other areas of their life like health and fitness where we can put them in the best environments to achieve the best educational outcomes.