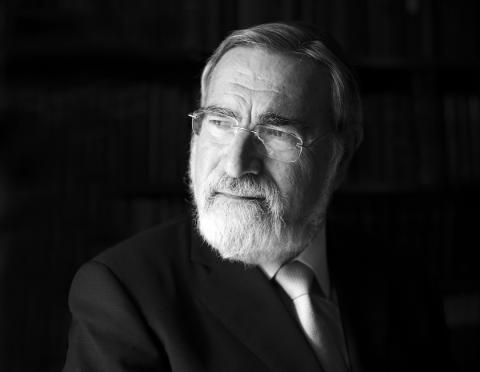 Today The Genesis Prize Foundation (GPF) announced plans to honor the late prominent scholar, theologian and philosopher Rabbi Lord Jonathan Sacks. The former Chief Rabbi of the UK and Commonwealth passed away on November 7, 2020, three weeks before the conclusion of the public voting for the 2021 Genesis Prize laureate.

On February 10, director, producer and philanthropist Steven Spielberg was announced as this year’s recipient of the Genesis Prize.

Lord Sacks was a member of the Genesis Prize Selection Committee from the founding of the Prize until 2015. His insights and wisdom greatly influenced the development of this philanthropic initiative in its early formative period.  Today the Genesis Prize, dubbed “the Jewish Nobel” by TIME Magazine, is considered the most prestigious prize in the Jewish world.

“Like so many people around the world, we were immensely saddened by the untimely passing of Rabbi Sacks,” said Stan Polovets, Co-Founder and Chairman of The Genesis Prize Foundation. “No one in the world was as adept at explaining Judaism to both Jews and non-Jews as Lord Sacks, always emphasizing the religion’s focus on justice, morality, and tolerance. We plan to honor this great Jewish voice by paying tribute to his life’s work and supporting the preservation of his intellectual and spiritual legacy, to ensure it continues to live on for future generations.”

Rabbi Lord Jonathan Sacks served as the Chief Rabbi of the United Hebrew Congregations of the United Kingdom and the Commonwealth for 22 years between 1991 and 2013. He gained global renown as a teacher of Jewish values, philosopher, prolific author and proponent of inter-religious dialogue. An internationally prominent and admired figure, he was a trusted and influential advisor to the heads of government and members of the British Royal Family.

In 2020, The Genesis Prize Foundation (GPF) for the first time invited the public to nominate laureates for this year’s award. Lord Sacks received several hundred nominations and was included as one of the seven finalists for the 2021 Genesis Prize. He passed away in November 2020 in the midst of the voting campaign, during which tens of thousands of Jews throughout the world cast their votes for Lord Sacks.

Recognizing the immense contribution of Lord Sacks to inspiring the next generation of Jews, his unique role as teacher of Jewish values and advocate of inter-religious dialogue, GPF plans to honor the life and impact of this extraordinary Jewish leader at a special event in London (COVID restrictions permitting) on November 14, shortly after the first anniversary of Lord Sacks’ passing. Many UK luminaries and distinguished leaders of the global Jewish community are expected to take part in the event.

As part of the event, the Foundation will produce a documentary about the life and impact of Rabbi Lord Sacks and is also currently in discussions with the Rabbi Sacks Legacy Trust about supporting other significant initiatives aimed at celebrating and sustaining his legacy.

Former Prime Minister of the United Kingdom Tony Blair said: “As a teacher, Lord Jonathan Sacks shared the gift of understanding of our own religious traditions and those of others. His insights gave meaning to ancient stories of hope and despair, vision and struggle, wickedness and redemption. He led us to understand how faith is central to human progress. He has been taken from us too young, but his teachings live on. It is our duty to pass these lessons to those who will come after us. I welcome and applaud the initiative of the Genesis Prize Foundation to honor and preserve this precious legacy.”

Jewish leader and legendary human rights activist, 2020 Genesis Prize Laureate Natan Sharansky commented: “Rabbi Sacks represents the ancient wisdom of our people, embodied in modern times; a contemporary voice unmatched in its moral clarity, profound knowledge and love of his people, and of the State of Israel. His universalisms were deeply rooted in Jewish tradition; his Jewish teaching opened arms to all cultures and religions. I know Rabbi Sacks took pride helping the Genesis Prize in its early stages and am deeply inspired by the Foundation’s decision to celebrate his legacy, ever so relevant today.”