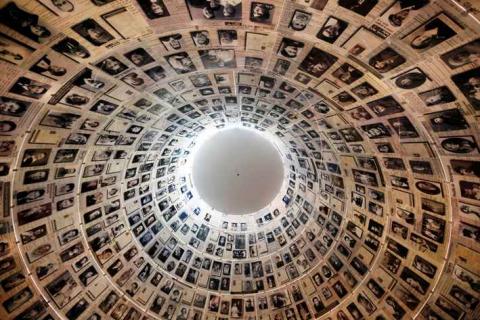 On a quiet Friday morning in Jerusalem, Yad Vashem, the World Holocaust Remembrance Center, is buzzing with activity. Visitors from around the world – Jewish and non-Jewish alike – pass through the impressive entrance plaza, with a desire to learn, understand and appreciate the meaning of the tragic events of the Holocaust.

Yad Vashem is one of Israel’s and the Jewish people’s most well-established institutions. Its sprawling complex on Har Hazikaron – the Mount of Remembrance – includes the Holocaust History Museum, the Museum of Holocaust Art, the Synagogue and the Exhibitions Pavilion; the Hall of Remembrance, sculptures, and other outdoor commemorative sites; the Yad Vashem Archives and Libraries – the world’s largest repository of Holocaust-era related documentation, publications and films; the International Institute for Holocaust Research; and the International School for Holocaust Studies.

In 2017, over 925,000 people visited Yad Vashem, more than 45,000 individuals around the world participated in various online courses produced by the International School, and the Yad Vashem website registered over 18.6 million visits from some 220 countries and territories.

Despite these considerable numbers, there is a feeling of urgency in the air at Yad Vashem, as the generation of Holocaust survivors is rapidly aging. In just a few years, the remaining survivors of the Shoah will be gone. How will the history of the Holocaust be passed on to future generations that will not have the benefit of listening and learning from the survivors? Can the meaning of the Holocaust be taught to the “Smartphone Generation,” whose attention span is far more limited?

THESE QUESTIONS were the focus of Yad Vashem’s July 2018 “Generation to Generation: Israel at 70” mission, a weeklong, multigenerational journey for Yad Vashem’s friends and supporters that included a visit to Vienna and Israel, commemorating both the tragedies and the triumphs of the Jewish people, and celebrating the 70th year of Israel’s independence. The mission attracted 100 participants from the United States, the UK, Australia, Israel and Mexico, whose ages ranged from 16 to 97, including four survivors.

The Generation to Generation Mission began in Vienna, exploring the history of the Jews in Austria – from their prewar prosperity to the horrors of the Mauthausen concentration camp. The rock quarry in Mauthausen lay at the base of the infamous “Stairs of Death.” Prisoners were forced to carry huge blocks of stone up 186 stairs, one prisoner behind the next. Many prisoners collapsed in front of the other prisoners in the line, falling on top of the others.

David Halpern, 68, of Livingston, New Jersey, a son of survivors and long-time Yad Vashem supporters Sam and Gladys Halpern, was particularly moved. “I’ve never been to Mauthausen, and the significant feature in Mauthausen is the staircase,” he explained. “It was made more significant that we were there with Eddie Mossberg, a Holocaust survivor whom I know personally. He was in the camp and survived. He is 91, and he climbed the stairs again. I think that was the defining moment of the Mission for me – on the staircase.”

After three days in Austria, which included meetings with Austria’s chancellor Sebastian Kurz and President of the Austrian National Council Wolfgang Sobotka, the group flew to Israel. Addressing the participants as they arrived in Israel was Yad Vashem Chairman Avner Shalev, who suggested that one of the most important challenges today is ensuring that the Holocaust remains relevant to even younger generations. Shalev, who has placed education at the forefront of Yad Vashem’s activities, acknowledged that educators need to cope with new environments of technology and learning. The main objective, he said, is establishing “meaningful remembrance.” New educational tools are being developed that will take advantage of technological advances, without losing the human context of events.

ADINA BURIAN, of New Rochelle, New York, chairwoman of the mission, said: “Our biggest accomplishment is that half of the participants are young leadership associates or third generation, or in many cases next-generation individuals that do not necessarily have a direct connection to the Holocaust. That’s an enormous success.” Steve Baral, 57, a new Yad Vashem Benefactor who participated in the Mission from Seattle, agreed. “One of the most beautiful parts of the mission was the very large participation of [members of the] third generation and even the younger generation.”

Burian and her family have attempted to convey her father-in-law’s Holocaust experiences in A Boy from Bustina, a memoir recently published by Yad Vashem which tells the story of the Holocaust through the eyes of Andrew Burian, who was 14 when he was sent to Auschwitz.

Barry Levine, 38, of Manhattan, and former chairman of the Young Leadership Associates of the American Society for Yad Vashem, was visibly moved by this shift in focus. “Coming to Israel always feels like you are coming home,” he said. “Coming to Israel after visiting concentration camps is an even greater feeling of coming home.”

It was especially significant for Mission members to celebrate Israel’s accomplishments after leaving Vienna. “We stood in Austria talking about Theodor Herzl’s vision,” recalled Burian, “and now here we have the opportunity to experience Israel at 70. It really brought us full circle. Herzl was first buried in Austria. It was meaningful to see the seeds of Zionism in Austria and then to arrive in Israel.”

THE GROUP viewed a new exhibition at Yad Vashem titled “Flashes of Memory: Photography during the Holocaust.” The exhibition focuses on the motives behind the three main groups of people who took photographs and made films in the Holocaust period and upon liberation – the Germans, the Jews and the liberating forces of the camps.

Mark Moskowitz, a New York native whose parents survived the Holocaust, and who serves on the executive board of the American Society for Yad Vashem, found the exhibition both fascinating and moving. “Viewing images from before the war, during the resistance and postwar side by side, and understanding how and why these photographs were taken was very thought-provoking, especially in this ‘selfie’ generation where nothing happens unless its image is distributed on social media.”

Levine added: “How will the younger generation remember the Holocaust in the absence of survivors? In the short term, we are addressing it by exposing as many people in the young leadership to survivors while we still can.”

“Mission participants also visited the recently opened exhibition entitled ‘The Human Spirit in the Shadow of Death’ at the Holocaust Remembrance and Heroism Educational Center on the IDF Training Campus in the Negev.”

The center, established by Yad Vashem in 2017, develops and carries out educational programs as an integral part of IDF training activities. Retelling the story of the Holocaust as a central event in the history of the Jewish people, and examining Jewish identity, mutual responsibility, heroism and attachment to the Land of Israel form the basis for fruitful educational endeavors.

Says Mission Chair Burian: “It was an unbelievable experience to see the enormous, new army base in the South, and to see the role that Yad Vashem is playing in educating Israeli soldiers on the lessons of the Holocaust.”

“The Mission, which ended with a moving and celebratory ceremony in the presence of the President of the State of Israel, demonstrated the important role of Yad Vashem and Holocaust remembrance in shaping and strengthening Jewish identity and continuity,” said Shaya Ben-Yehuda, managing director of the International Relations Division at Yad Vashem.

Yad Vashem is far more than a memorial to the events of the past century. Its educational and commemorative activities, programs and courses ensure a greater commitment and understanding not only of the Jewish past, but also for the Jewish future and that of humanity as a whole.