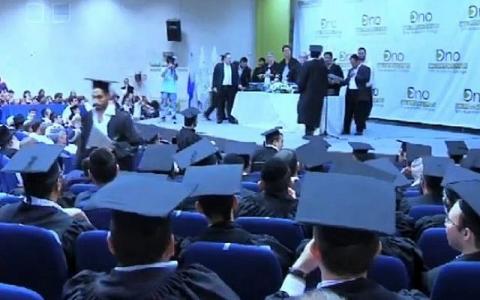 Education Minister Naftali Bennett religiously champions educational tracks specifically designed for ultra-Orthodox students. Following the first petition to the High Court of Justice against these tracks, the Council for Higher Education determined in 2015 that it was permissible to teach gender-segregated classes but only in designated classrooms. The council also decided that any regulations relating to dress codes and other “demands for modesty” could not infringe on human dignity or equality. However, it turns out that academic institutions are not adhering to these conditions. Institutions that are operating classrooms for the ultra-Orthodox – from the publicly-funded Bar-Ilan University to the many private institutions – have long violated these conditions, as reported by Or Kashti (Haaretz, July 27, Hebrew edition).

There are many manifestations of this: Gender segregation at the entrance to the campus and in corridors leading to lecture halls, separate library hours, discriminatory signs around the campus, as well as “modesty regulations” that are imposed mainly on women. One institution operates a “waiting room” in which men wait until the study area is clear of women, while another rebuked a woman for arriving on a scooter.

The widespread violation of regulations undermines the essence of academia. Another council decision, according to which the curriculum in Haredi programs must be identical to that of general study programs, “particularly with regard to academic staff,” is also being violated. An examination of courses in programming and computer sciences for ultra-Orthodox students found significant differences in the level of lecturers. This is on top of the insult to female lecturers who are not allowed to teach ultra-Orthodox men.

The Council for Higher Education is systematically forgiving with regard to the infringements of its own rules. The fact that Bennett and the council have allowed gender segregation to become so widespread does not mean that this is a natural or necessary development. The council’s yielding to the ultra-Orthodox demand for designated tracks of studies for Haredim is a tangible infraction of human dignity. The argument that it is possible to control the extent of segregation after it has received official recognition and enthusiastic support from above is a dangerous feigning of innocence.

The public sphere is changing before our eyes. Secular schools are segregating boys and girls in events that include religious students; female soldiers are the first to pay the price of “integrating” religious and ultra-Orthodox soldiers into the army; billboards with images of women are vandalized; women are asked to change seats on flights; women whose attire is perceived as immodest are exposed to violence and schoolgirls in short pants are humiliated. Equality between men and women is under consistent and systematic attack, and the academic world is one of its major battlefronts. Academia must defend itself and repel this attempt to destroy it.