The future Jewish citizens of Palestine 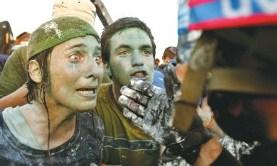 The State of Palestine should require all of its citizens to study the state, its history, language, culture, etc., alongside of the particularistic subjects and content of the national minority. There are three possible solutions for dealing with the issue of settlers in a genuine peace agreement with the Palestinians.

Those who chose option one will be eligible to receive full and generous compensation payments to enable them to resettle wherever they choose in the State of Israel. Leaning the lessons of the Gaza disengagement, the State of Israel should not take responsibility for their resettlement plans; the state does a bad job of it. Compensation payments should be very generous, but should also be time-linked – the longer you wait, the less you get. Once compensation agreements are signed, a date of evacuation should be set and the keys should be turned over the state.

Those who chose option two and wish to remain in Judea or Samaria but under Israeli sovereignty will be able to do so in the areas to be annexed. All fair estimations of a workable deal approach between 4-5 percent of the territory of the West Bank. That would allow between 75-80% of the settlers to remain where they are.

Settlers from outside the annexed areas could decide to move into those areas annexed and remain in Judea or Samaria. They will receive generous compensation for their homes left behind in order to allow them to purchase a similar home in one of the annexed settlements.

For those to whom remaining in Judea or Samaria is more important that living under Israeli sovereignty, they should be allowed to remain where they are (on the condition that their homes are not built on privately owned land). If they decide to remain, they must recognize that they will become citizens of the Palestinian state. They must agree to live under Palestinian sovereignty and laws.

It should be possible for them to hold dual citizenship and also remain citizens of the State of Israel. It should be assumed that the Palestinian state will not allow them to bear arms and that their security would be the direct responsibility of the Palestinian state. While very few are likely to select this option, I would insist, if I were a negotiator for the Palestinians, on accepting the principle of a Jewish minority in their state.

I lectured last week to a pre-army academy in Aderet. One of the students asked me if I recognized the Jewish people’s right to all of the land of Israel. I responded yes. I understand that when our fingers walk through the pages of the Old Testament they are traveling on the hilltops of Judea and Samaria. The cradle of our civilization is not the beaches of Tel Aviv but in those very hilltops where the prophets walked that have been settled over the years since 1967.

I also said that by the same logic we could easily speak about the “promised borders” of the Bible, which reach all the way to Iraq, but we don’t. There is a difference between having rights and exercising those rights. We also have the right (and obligation) to guarantee the lives of our citizens which require us to compromise with our neighbors on borders. We will not be able to exercise our Jewish rights to the land on all of the land. We will have to make compromises.

When Israel was born, after the war in 1949 we found ourselves with a Palestinian population of some 156,000 people. They were then about 12% of the population. Today they number more than one million and they are 20% of the population. These people did not choose to be Israeli citizens. The State of Israel granted them citizenship and kept them under military rule until 1966. They have been granted equal rights (as individuals) by law although as a collective they have been largely discriminated against since the birth of the state. Their situation and status is much better than it was decades ago and there are constant signs of progress in reducing gaps, while there are also very worrying signs of gaps widening as well.

Israel does not recognize its Palestinian citizens as a “national minority” and does not deal with the issue of collective rights, other than their right to live in exclusive communities and to study in segregated schools in the Arabic language. Their curriculum is controlled by the state and they are required to study core subjects including history (of Israel and the Jewish people), civics, Hebrew, Bible and more. They do not study their own narrative and very little Palestinian culture – literature and culture.

The demand to the Palestinians to allow for the existence of a Jewish-Israeli minority in the State of Israel is going to challenge us all to come to terms with the meaning of collective national minority rights. The State of Palestine should require all of its citizens to study the state, its history, language, culture, etc., alongside of the particularistic subjects and content of the national minority.

In a conversation I once had with the Palestinian Prime Minister Salam Fayyad on this subject, in which he said he was not opposed to the idea of Jews in the Palestinian state, I encouraged him to announce that the State of Palestine would treat its Jewish minority exactly in the way that Israel treats its minority.

I still believe that this is a good formula and should encourage us all to carefully consider, in the interest of the future Jewish citizens of the State of Palestine, the whole concept of collective rights of national minorities. The development of this concept could be pioneering as almost every nation-state in the world is confronted with problems of large national minority groups.

By GERSHON BASKIN
The writer is the co-chairman of IPCRI, the Israel Palestine Center for Research and Information, a columnist for the Jerusalem Post, a radio host on All for Peace Radio and the initiator and negotiator of the secret back channel for the release of Gilad Schalit.