On the fringes of ultra-Orthodox society 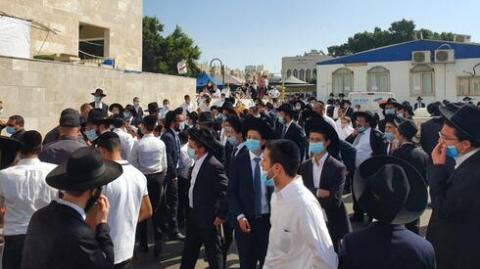 Chief Rabbi David Lau’s decision to ignore the criminal offenders who participated in recent riots in Bnei Brak and instead lay the blame on a small group of marginalized youth drew the public’s attention to a troubling but hardly new phenomenon.

Recent years have seen a steady increase in dropout rates from ultra-Orthodox educational institutions, and a growing number of marginalized ultra-Orthodox youth. This trend has soared as a result of the COVID-19 pandemic, which led to the full or partial lockdown of many of these institutions. While even the most senior ultra-Orthodox rabbis are attempting to douse the flames and banning participation in demonstrations, their calls seem to be falling on deaf ears.

The young rioters, who hail from all segments of haredi society – Lithuanian, hassidic and Sephardi communities – no longer obey religious leaders, but rather decide for themselves how to behave; they treat Israel’s law enforcement authorities and the ultra-Orthodox rabbinical leadership with equal disdain.So it would seem that the leading ultra-Orthodox rabbis in Israel have lost control of their flock.How did this happen?

The growth of the ultra-Orthodox community in Israel over recent decades and its monolithic approach to education – that is, that boys should engage only in full-time Torah study – have created an impossible situation for many ultra-Orthodox youths. This affects especially those suffering from learning disabilities, family and financial difficulties, conflicts with their parents about religious observance, and have difficulties in adjusting to the stringent demands of the yeshiva world.

These youths want to be part of the ultra-Orthodox community, but do not meet its strict educational standards. Consequently, many of them feel cut off and alienated from the community and lack self-confidence and a sense of self-efficacy (ability to achieve). Though ultra-Orthodox educators are aware of this issue, and “lighter” alternative educational frameworks have been established over the years, combining Torah study with vocational training and secular studies, these have not been able to cope with the magnitude of the problem.

These special institutions (such as schools focused on technological education or ultra-Orthodox high schools that include secular subjects in their curriculum) must grapple with diverse challenges in attempting to address this issue – including a lack of pedagogical expertise, resources and funding, as well as a widespread reluctance within the ultra-Orthodox community to acknowledge the problem and grant full legitimacy to these educational institutions.

In addition, government agencies have not geared up to effectively address the phenomenon of marginalized ultra-Orthodox youth, which carries with it the risk of more serious problems, such as violence, criminal behavior, and alcohol and drug use.Despite attempts by the Finance and Education ministries to encourage and incentivize the opening of alternative educational institutions to address the needs of marginalized youth, there is currently no integrated and comprehensive government plan on this issue, a plan that would involve all the relevant ministries: Education, Internal Security, and Labor and Social Affairs.

In addition, pedagogical diagnostic and guidance services for struggling youth are lacking – and parents, educators and principals lack the basic knowledge and tools for identifying learning disabilities and providing emotional support. In the meantime, these youths fall between the cracks and their distress is left unaddressed. The years in which this issue was ignored are now taking their toll on Israeli society.

The riots in Bnei Brak revealed that school dropout and the growing alienation of ultra-Orthodox youth from their communities are no longer just internal ultra-Orthodox problems, but rather a social phenomenon that should be cause for concern among all decision-makers – not just the police – who are addressing the need to integrate the ultra-Orthodox into Israel’s economy and society.

This unit, in collaboration with ultra-Orthodox leadership and educators, should establish guidance centers to identify youth on the verge of dropout and place them in educational institutions that provide an effective response to their needs. Integrating these young people into Israeli society and the economy, while fostering a clear and strong sense of identity and belonging among them, is an essential task.

Only in this way will we prevent the next crisis in the relationship between the ultra-Orthodox public, the general public and the State of Israel.