Forgot about the Holocaust 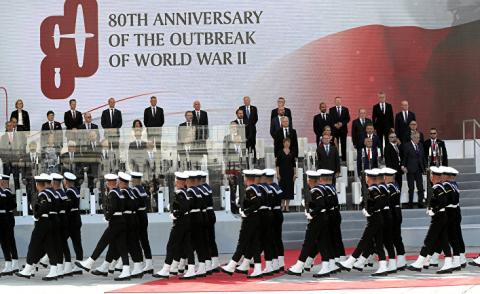 The right-wing nationalist government in Poland can celebrate a great victory. In the long war over the “culture of memory,” an objective it set for itself upon coming to power in 2015, the last bastion was conquered yesterday. After Israel’s recognition last yearof the Polish narrative – which emphasizes the suffering of the Polish nation and minimizes its part in causing suffering to another nation – now Germany and the United States have also been convinced of the justice of the Polish claim.

In a series of ceremonies and assemblies held yesterday in Poland on the 80th anniversary of Nazi Germany’s invasion and the beginning of World War II, all the speakers – from Polish President Andrzej Duda, to German President Frank-Walter Steinmeier and U.S. Vice President Mike Pence – mentioned the Polish victims and Polish suffering.

Members of the Polish nation were described as heroes and freedom fighters, who risked their lives for the entire European continent, and paid the highest price in the war against the Germans: Their country ceased to exist as an independent entity, their cities were destroyed and three million of their people – the Christians – paid with their lives.

The German president went even further and apologized to the Poles for the crimes perpetrated by the Germans against their people and on their soil, and paid respect to the “Polish families” who paid the highest price and even fought courageously against the German occupier. The U.S. vice president said that Poland is a “nation of heroes” and praised its people as “freedom fighters.”

But the Jews – the group that paid the highest price in World War II – were almost totally absent from the speeches, the assemblies, the ceremonies and the marches. It’s true that President Duda mentioned, in a single sentence, that the Jewish citizens of Poland were imprisoned in ghettoes and sent to extermination camps – but he said that it was part of the “terror” that was the lot of the “entire” Polish nation. He added that Poland was “humiliated” that at the end of the war the remains of these camps remained on its territory.

It is possible that the organizers of the ceremonies, and the speakers at them, felt that in any case the calendar is packed with memorial days for the Jewish Holocaust, and that now the time has come to turn the spotlight on the suffering of members of the Polish nation – on whose occupied soil the Holocaust took place. Evidence of this approach could be found in the comment late last year by the Polish ambassador to Germany, Andrzej Przylebski: “You would think that Hitler dealt mainly or exclusively with murdering Jews.”

One can understand the Polish need and desire to deal with their suffering – which is not in doubt – during World War II. But we should be infuriated that the suffering of the Jewish people – 6 million of whom were murdered in the war, half of them Polish citizens – did not reverberate in the state and official events conducted in Poland, but was swallowed up inside them as though it had never happened.

It is possible that the organizers of the ceremonies and the speakers didn’t want to open that Pandora’s box, since any mention of Jewish suffering in the Holocaust would require them to deal with the sensitive and complex issue of the part played by Polish citizens in the Nazis’ crimes – many, according to Polish and Israeli historians; few, according to the Polish government and other Polish historians.

Whatever the reason, conducting a state-sponsored assembly, with international participation, for an event of the magnitude of World War II without referring to its Jewish victims is a historical distortion.

Israel, without a single senior representative participating in the ceremony, which was attended by senior governmental figures from all over the world, also bears responsibility for this injustice. First of all because it signed the Polish-Israeli “joint declaration” equating anti-Semitism with “anti-Polishness,” noting that “many” Poles saved Jews and downplaying the part of Poles in the Nazis’ crimes – which according to Poland were carried out by “certain people,” with no connection to their national origin. Later, because Israel did not bother to discuss these fraught historical controversies – despite the promises of Prime Minister Benjamin Netanyahu – but rather allowed this complex issue to die down in the hope that it would be forgotten.

That’s why Poland’s ambassador to Israel, Marek Magierowski, could declare in public that the crisis has passed and no longer exists, without any explanations to the general public. In that context it is worth mentioning that Israel refuses to this day to reveal the names of the researchers who are said to have drawn up the controversial joint declaration.

Among the reasons: damage to foreign relations. It’s possible that Israel’s foreign relations have top priority. But there is no question that this policy is undermining something else – the memory of Holocaust victims.