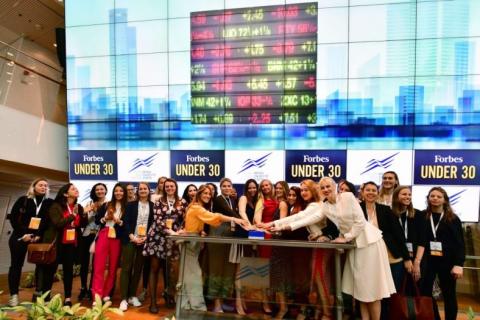 Hundreds of young, inspiring and influential entrepreneurs, disruptors, visionaries, change-makers and investors from 39 countries are in Israel this week to take part in the inaugural Forbes Under 30 Global Women’s Summit. The summit is taking place in Tel Aviv and Jerusalem. It brings together some of the most powerful female leaders from around the world, comprised of honorees from Forbes’ Under 30 lists and mentors who will provide leadership, guidance and insights.

“We’re bringing together 500 visionaries from around the world- US, Europe and Asia, the Middle East and Africa and of course, Israel. Supporting the future aspirations of female leaders and breaking down systemic barriers to achieve those aspirations is critical to achieving greater economic vitality around the world and driving greater prosperity not just for women, but for everyone,” Moira Forbes, EVP Forbes and President of Forbes Women, said at the opening of trading on the Tel Aviv Stock Exchange on Sunday.

“Our signature Under 30 Summit brings together the most inspired minds around the world, whose actions create change throughout all levels of society,” said Randall Lane, Chief Content Officer at Forbes. “Because we bring together the most impressive minds in entrepreneurism today, we are in a unique position to activate a worldwide community of leaders who can raise our collective consciousness and bring about meaningful social change that benefits women everywhere.”

On Monday, delegates congregated at the Peres Center for Peace and Innovation in Jaffa to hear talks by their counterparts on women making a difference the world over. Navigating from failure to success, being authentic, the importance of philanthropy, changing government laws, and innovating in the tech space were just a handful of the topics on the agenda at this international gathering.

It was noted that Unit 8200 has a 55 percent majority of women in the army but after age 30, the ratio of men to women changes drastically. “It starts in education. We need to spread the word about women’s achievements and successes in tech and science. Young women need a role model and someone to be like,” said Chen. “We need to ensure that we have the right mentoring. When you have the right mentor and see she has done it. We need to encourage equality at home, too. This is one of the things that will increase the numbers.”

After the panel, Zuckerman Stark told NoCamels that she doesn’t usually label herself according to her gender: she’s a CEO, not a woman CEO. But she also takes her role as a mentor for younger women entrepreneurs seriously. “Statistically, in my career I was the minority. The minority in my class, in my army service, in the job titles I held. And it didn’t necessarily have to be like that. When I was in my army course we were less than a third women. Today, I am a mentor and I want the statistic to just be about men and women, no difference,” she said, noting she’s a mentor with the Woman2Woman(https://www.w2w8200.com/our-mentors) initiative.

The Forbes Under 30 Global Women’s Summit is presented in partnership with the Charles and Lynn Schusterman Family Foundation, the Paul Singer Foundation, Startup Nation Central, the Pratt Foundation and the One8 Foundation. The Presenting Sponsor of the summit is J.P. Morgan.

American philanthropist Lynn Schusterman, the co-founder and chair of the Charles and Lynn Schusterman Family Foundation and founder of several other philanthropic initiatives, was the special keynote speaker for Monday’s event. She spoke about the need for belief in one’s self. “The future belongs to each and every one of you today. You have the technology and access to education that you need to succeed,” Schusterman told the audience. She also said that when she first began, she “had to bring men to the table with me at first. No one took me seriously.”

Lane, Chief Content Officer at Forbes, told NoCamels that the summit currently underway is a “big idea event” meant to show women that when they work together, they can take the lead, bring change, build bridges, discuss challenges and set goals of establishing new standards for women. “The idea of bringing young women entrepreneurs to one place, from around the world, across industries to create bonds and partnerships… can they find solutions? We all know that the world will be a better place if we had more women leaders,” he said.

Amanda Nguyen, the founder and CEO of Rise, an American non-governmental organization aimed to protect the civil rights of sexual assault and rape survivors, drew a standing ovation from the crowd for her talk on reforming thelawsfor survivors of sexual assault in the US. Nguyen, who has been nominated for a 2019 Nobel Peace Prize, told NoCamels that the Israel-sponsored UN resolution preventing and eliminating sexual harassment in the workplace – and which was co-sponsored by other countries – is an inspiration for her NGO in their bid for a UN Resolution for Sexual Assault Survivors.

“One of the things that inspired us was Israel’s leadership on this resolution to tell the world that sexual harassment is not something that will be taken lightly,” Nguyen told NoCamels during the lunch break. “No matter where you are from, no matter who you are and no matter where you come from, equality should not depend on geography.”

Indeed, Maggie McGrath, Editor of ForbesWomen, opened the Monday sessions in calling for the need to break through barriers across all facets of society around the world and repair the pay gap, the funding gap. “Sitting in this room are aspiring prime ministers, unicorn founders and everyone here is doing something to lift up the generation behind us,” this is just the start of our movement to move forward,” said McGrath.

The international group of women and men taking part in the summit were also given a taste of Israeli culture – tours of food markets, a visit to the beach, and samples of the vibrant nightlife. “Israel is also a wonderful place to eat and celebrate food and that is core to our lives and our business. It’s been really inspiring to explore the cooking scene,” Sierra Tishgart, co-founder of Great Jones, told NoCamels, adding that she and her co-founder Maddy Moelis, were taking home, “spices, halva, tahini, and all kinds of things.”