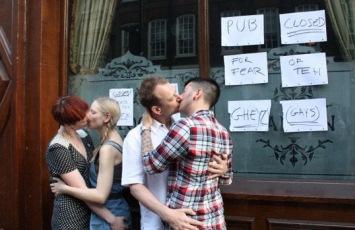 President Obama came out in support of gay marriage Wednesday. Yet, only a day earlier, voters in North Carolina had approved a constitutional ban on gay marriage and other domestic partner arrangements — even though a majority told pollsters they favored allowing gay marriage or domestic partnerships. If that seems confusing, it is. Gay marriage brings together the most complicated cluster of conflicting legal, social and moral claims in the United States today. When thinking about same-sex marriage, and weighing my own reasons for supporting it, I find it helpful to remember a few key points that many people get wrong.

Opponents of same-sex marriage argue that, with few exceptions, marriage has always been about uniting the two sexes and linking mother and father to children. Change that, and marriage ceases to be marriage. True premise, false conclusion. Where the proponents of this view go wrong is in saying that marriage can do only one thing. Marriage multitasks. Yes, it binds biological parents to their children — something same-sex marriage will not change. But marriage also unites nonbiological parents to children: adoptive parents, for example, and step-parents and, yes, gay parents. And it does much, much more. It acts as a portal to adulthood and domesticity for the young; provides support and care-giving to adults; offers a safe harbor for sex and encourages monogamy; bolsters financial and emotional security; creates family networks (those sometimes-pesky in-laws); connects couples and kids to their communities.

I think the best definition of marriage is the one that most married people sign up for in their vows: “To have and to hold, from this day forward, for better, for worse, for richer, for poorer, in sickness or in health, until death do us part.” Extending the boundaries to include gay couples does not weaken that definition — it reinforces it. And to throw away the many social benefits that gay marriage provides because there is a single function that it can’t perform is perverse.

Opponents are right when they say that, other things being equal, children do best when raised by their married biological parents. But, again: true premise, false conclusion.

The great enemy of the traditional family in the United States today is not the desire of gay couples to get married; it is the failure of heterosexual couples to get married and stay married. Over the past 10 years or so, while the country was busy debating same-sex marriage, the number of cohabiting couples doubled. Because of cohabitation, divorce and single parenthood, a third of children today do not live with two married parents — an ominous trend that began decades before same-sex marriage came along.

The top priority for family policy today should be to reinforce the norm of marriage, which is exactly what gays want to do. By underscoring that marriage is something to which all Americans can and should aspire, same-sex unions are part of the solution, not part of the problem.

And don’t forget that many gay couples are raising kids. Why would anyone think those children are better off if their parents can’t get married?

3. A collision with religious liberty is unavoidable.

Same-sex marriage, like gay rights protections generally, brushes up against objections from people who oppose homosexuality on religious grounds. What if a Salvation Army bookkeeper seeks health benefits for her wife? What if a student at a Baptist college demands married-student housing for his husband? Must religious-affiliated institutions choose between their principles and their nonprofit tax status? It’s a real problem. The myth is that it’s an unmanageable one.

We know this because we have already dealt with it, in the context of abortion. Congress and the states have provided religious-liberty exemptions that let Catholic hospitals, for example, avoid performing the procedure. Many of the same kinds of exemptions can and should be offered in the context of same-sex marriage. Working out the precise balance between gay rights and religious liberty will take some time and effort, but, in the vast majority of cases, accommodations can be offered at acceptable cost to both sides.

Wrong. States have always defined marriage differently. Rules vary on whether you can marry a blood relative, age of consent, divorce and so on. Although states recognize one another’s marriages as a matter of convenience, neither the Constitution nor federal law requires them to do so.

In the District of Columbia, where I work, I am married. In D.C., my other half, Michael, is my husband. In Northern Virginia, where I live, I am legally unmarried. Michael is, legally speaking, a stranger to me. The situation is bizarre and, frankly, demeaning. We don’t like it. But we manage to live with it.

Mitt Romney and most Republicans want to amend the Constitution to define marriage as between a man and a woman. Most same-sex marriage advocates hope the Supreme Court will soon rule that same-sex marriage be made legal nationwide. Among supporters of such unions, I’m a rarity: Like President Obama and former vice president Dick Cheney, I think it’s healthier to let states continue to go their separate ways on marriage until the country is closer to a consensus. I believe a gradual approach is usually a safer and surer route to lasting social change when it’s available — and, on this issue, it is.

5. The battle is almost over.

A Gallup poll finds approval of same-sex marriage breaching 50 percent. Obama now openly supports it. The younger generation doesn’t see any problem with it. Won’t this fight be over soon?

Possibly, but remember: Most states ban same-sex marriage, many by constitutional decree. Absent a Supreme Court decision, those bans will take years to change. Even if the Supreme Court were to intervene, its ruling — especially on a 5 to 4 vote, which is the best gay-marriage supporters could get from the current court — would not necessarily end the argument. Indeed, as with the court’s 1973 decision declaring a constitutional right to abortion, it might escalate the argument.

This is a fight about the meaning of marriage, not just about gay civil rights. For traditionalists who believe that sex, procreation and marriage go together in a single bundle, same-sex marriage seems to threaten the very concept of family. For modernists who believe that birth control, feminism and artificial reproductive technology untied the bundle long ago, same-sex marriage is a step toward the revitalization of family. These are core values, and I would be surprised if either side gave up anytime soon.

The same-sex-marriage movement has traveled breathtakingly fast by historical standards, but it probably still has a long way to go. To paraphrase Robert Frost, the best way out is always through.

By Jonathan Rauch
Jonathan Rauch is a guest scholar at the Brookings Institution and author of “Gay Marriage: Why It Is Good for Gays, Good for Straights, and Good for America.”