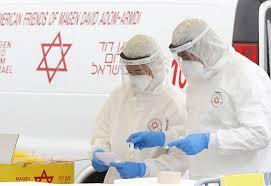 A new study conducted for Vibe Israel found that the Jewish state’s image in the international community was seen in a positive light during the first wave of the coronavirus pandemic. The study, based on data from research done by Bloom Consulting from March 30-April 2, utilizing a new type of measurement called Brand-Nought, analyzed how a country was perceived internationally based on its government’s handling of the coronavirus crisis.

When compared to over 140 countries, Israel was found to have a positive image, especially compared to countries like Italy and the United States. “Israel being one of the first to close its borders and being quick to react was an indication on how positively it handled the virus,” CEO and founder of Vibe Israel Joanna Landau told The Jerusalem Post.

“During the first wave, countries like the US were reluctant to quarantine, Italy was in a terrible state and Israel was two weeks into its full-on quarantine," she said. "While New Zealand literally crushed the curve, we were able to flatten it, while others were still struggling with it.”

Landau believes that there were three aspects that contributed to Israel having such a positive image: reacting quickly, keeping quarantine seriously and being one of the countries involved in the race to develop a vaccine.

However, not all specific areas studied were impacted to the same degree – with some, most notably tourism, being surprisingly unaffected. “Tourism to Italy, for instance, will not suffer from this. People are always going to want to go to Italy once the outbreak is over because it’s such an attractive tourist destination,” Landau explained.

How a country’s government handled the crisis had the least impact on whether people want to buy products from that country. “This would have been a perfect window of opportunity to highlight the amazing products available in Israel because there was a lot of interest then,” Landau told the Post.

However, with the situation changing in July and a second wave of the virus seeing a new spike in cases, it seems like that opportunity has passed. “Managing the crisis well was a strategic asset and we were handling it well in terms of building goodwill towards Israel. It’s a shame Israel's handling of the crisis has deteriorated after how well it started,” Landau explained. “If the study was done again now, we wouldn’t be doing as well.”

This is for two reasons: less effective handling of the second wave and the bad political press from the debate over annexation.

Israel should be focused on promoting many of the positive things the country has to offer, Landau argued. “What we always argue as an organization is that whenever Israel puts its best foot forward – hi-tech, the LGBT community, food, Eurovision – they shine. Politics aren’t enough to stop that. Many people are sure everyone doesn’t like Israel, but that’s not true – they mostly just don’t care,” she said, adding that “If the political aspects were so strong, Israel would not have shown as positively as it had.

“What’s not helpful is, obviously, the discussion around annexation right now. That’s not good for business," she said. “The issue with the annexation is that if the coronavirus crisis has had the least negative impact on the willingness of people to buy from Israel… then what a shame to now be bringing up annexation, which is not good for business because it’s inviting boycotts and so on… its timing could not be worse, because we had a great opportunity [but] we again brought the topic back to something political, which is always controversial.”

“The problem is that it’s very time-limited as it is entirely dependent on how the government is handling the crisis within the specific time frame the research was conducted, and this particular outbreak is especially volatile because everything can change in just two weeks. The UK only just reopened the pubs and I wouldn’t be surprised if we could see another crisis there. In Israel, if we go to lockdown again, then we might be better,” she continued, adding that continuing to focus on vaccine development efforts could be one way of restoring goodwill towards Israel.

The implications of this study were seen by Emily Schrader, CEO of Social Lite Creative who works with Magen David Adom on their English language content, as validation of their efforts in helping fight the initial first wave of the pandemic. Speaking to the Post, Schrader said that, “It’s great to see our efforts paid off with MDA. We really wanted to educate the public with the facts as soon as possible and MDAs strategy of rapid response with testing and setting up call centers was critical, not only to Israel’s success in flattening the curve, but also in setting an example for the rest of the world.

“We are really proud to work with MDA who has been leading the charge not only in education about COVID-19 but also in exporting that strategy and tactics to assist other countries like the Congo. We will continue to work to cope with the challenges we face now.”

In addition, the study does show the potential application of Brand-Nought measurements in other crises. The measurement works by essentially measuring every negative mention that a brand has – or in this case, a country – and how many positive mentions are needed to make up for it. “It’s a quantifiable way to measure how to behave under crisis,” Landau explained.

But the real strength of the metric is applying it to other crises, and this could potentially be applied to annexation as well. “Israel is always in some sort of crisis, and this gives an opportunity to see not what we think the crisis is, but what our target audience thinks,” Landau said.