For the first time ever: Israel Pavilion at the Dubai Air Show 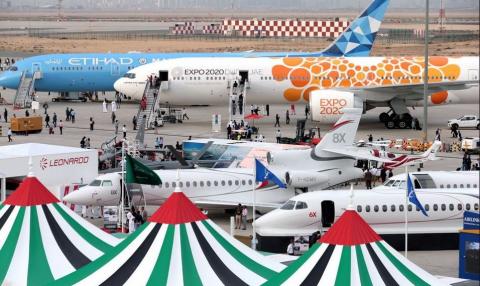 The Defense Ministry sent an official delegation of Israeli defense contractors to the Dubai Air Show this month in a sign of the growing military ties between Israel and the United Arab Emirates after the two countries normalized relations last year.

Seven Israeli firms, most of them state-owned, went to the defense exhibition in the Emirati capital, one of the premier weapons shows in the world. The delegation was led by Brig. Gen. (res.) Yair Kulas, the head of the Defense Ministry’s weapons exports department, Sibat.

“Opening a national Israeli booth in Dubai represents a new and historic element in the strengthening of ties between Israel and the United Arab Emirates. We are pleased with the opportunity to take part in this important exhibition and to present Israeli defense contractors’ advanced technological capabilities,” Kulas said in a statement. “During the exhibition, we plan to hold many meetings and discuss advancing new partnerships,” he added.

Rafael Advanced Defense Systems displayed its “drone dome” that detects and destroys drones with lasers. Emirati defense officials were seen Sunday asking about the range and weight of the anti-drone system at the Israeli pavilion.

Israeli Air Force chief Amikam Norkin also attended the defense exhibition, taking part in a meeting of international air force commanders. On Sunday, he was seen speaking with German air force chief Ingo Gerhartz, with whom he’s developed close ties over the past two years, as well as the commander of the Royal Jordanian Air Force, Muhammad Hiyasat, and the head of the Emirati air force, Ibrahim Nasser Muhammad al-Alawi, whom Norkin hosted in Israel last month.

“I applaud the defense exports department, Sibat, and Israeli defense industries’ participation, and I am sure that they will make fertile ground bloom with additional cooperation between the [two] countries,” he added.