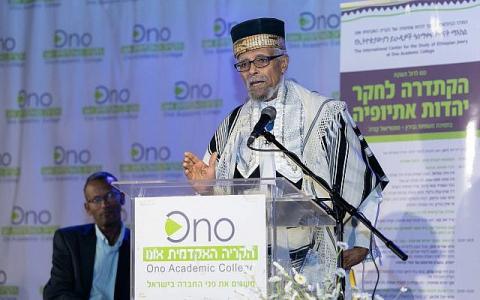 Ethiopian Israeli religious leaders are hoping a new academic center will “create a new language” to talk about the richness of Ethiopian culture and traditions, after decades of discrimination dismissing the contribution of Ethiopian Judaism.

Rabbi Dr. Sharon Shalom, an Ethiopian-Israeli community leader and well-published author launched the International Center for the Study of Ethiopian Jewry at the Ono Academic College in Kiryat Ono Sunday night, telling hundreds of people that the center’s creation was “the dream of an entire community.”

The center will include the creation of a Beit Midrash [house of study] in cooperation with the kessim, the religious leaders of the community, an academic journal about Ethiopian Jewry, conferences, and study tours to Ethiopia.

The time has come to move beyond asking ‘how did Ethiopian Judaism start?’ and appreciate the organic development of a unique branch of Judaism that is interwoven into the fabric of Ethiopian culture, Shalom said. “We must shift from explanation to understanding,” he said.

Ethiopia’s ambassador to Israel, Tsegay Berha, called it a “sacred” initiative and vowed that the Ethiopian government would support cooperation.

Shalom noted that there are unique Ethiopian customs that deserve the same academic and research treatment as European Judaism. Ethiopian Judaism is considered “pre-Talmudic Judaism,” meaning the Jewish community in Ethiopia split off from other branches of Judaism prior to the introduction of rabbinical interpretations and laws in the Mishna and Talmud that evolved in the past 2,000 years. Therefore, Ethiopian Jewry presents an opportunity to study one of the closest interpretations of tradition to ancient Judaism available today, Shalom said.

The Gewurz Family of Montreal, Canada is the main funder of the International Center for the Study of Ethiopian Jewry. Ilan Gewurz, who was in the same Israeli army unit as Shalom years ago, said his family felt strongly about “giving a voice to minorities, to research and understand all of Israel’s minorities and not just the majority,” he said.

“Giving [Ethiopian-Israelis] a seat at the table will strengthen all of the nation of Israel,” he said.

One of the major goals of the center will be developing a curriculum about Ethiopian Jewry for Jewish high schools in the US.

“The idea is to build a curriculum about the history, Zionism, and Jewish perspectives that are hard to find in the Jewish world, in order to create equality, acceptance, and support of the ‘other,’” Shalom said. They plan to fine-tune the curriculum in the US, which is more “tolerant and pluralistic,” before bringing it to Israel, Shalom added.

Shalom himself embodies a lot of the pluralism and mutual respect he is trying to bring to Israeli society. Since 2008, Shalom has served as the head rabbi of the Kdoshei Israel synagogue, an Orthodox Ashkenazi synagogue founded by Holocaust survivors. At the same time as leading an Ashkenazi congregation, Shalom has been a leading philosopher and religious voice in the Ethiopian Jewish community, including writing a 2012 book, “From Sinai to Ethiopia: The Halachic and Conceptual World of Ethiopian Jewry.” The seminal book, called a ‘Shulchan Aruch‘ [Code of Jewish Law] for Ethiopian-Israelis, codified many of the Ethiopian Jewish traditions and discussed ways Ethiopians should honor and observe their unique Jewish customs in modern-day Israel.

The center will take over management of the existing International Society for the Study of Ethiopian Jewry, a loose group of researchers that did not have an academic home. It also plans to bring Ethiopian-Israeli students to Ethiopia for research trips, which will invariably strengthen the Jewish community still in Ethiopia.

There are still about 8,000 Jews in Ethiopia waiting to immigrate to Israel. These Jews are not considered Jewish under Israel’s Law of Return, because they had relatives who converted to Christianity, often under duress, generations ago.

Although Prime Minister Benjamin Netanyahu originally announced a government plan in 2015 to bring approximately 1,000 Jews from Ethiopia each year for five years, the NIS 1 billion ($284 million) was not budgeted for 2018, freezing the immigration for the past 13 months. Last week, the Knesset’s Immigration and Absorption Committee announced that immigration from Ethiopia is expected to resume on February 4 with the arrival of 84 new immigrants. Around 300 Ethiopians are expected to come in February and a total of 1,000 in 2019.

MK Tamanu-Shata (Yesh Atid), herself a graduate of Kiryat Ono, said the center is essential for the Ethiopian Israeli community, because they are still dealing with rabbinical authorities who question whether Ethiopians are “real Jews” and many other instances of discrimination. Scandal-prone MK Oren Hazan (Likud) called Tamanu-Shata a “pet immigrant,” during a fiery Knesset hearing two weeks ago.

The issue of whether Ethiopian-Israelis are “real Jews” still comes up for debate, much to the chagrin of community leaders. In June, many people were outraged by the Barkan winery’s decision to remove Ethiopian workers from handling wine in order to pursue a more rigorous kosher certification from Eda Haredit, a private hardline ultra-Orthodox group.

The group said it doesn’t allow Ethiopian-Israelis to come into contact with wine because they are not considered Jewish, and gentiles are forbidden to touch kosher wine. The winery eventually reinstated the Ethiopian workers and lost the Eda Haredit certification.

Tamanu-Shata said that the center will help young Ethiopians deal with this type of discrimination by providing them with both concrete information about their past, and empowerment for their future.

“We need to gather this information for ourselves, for whenever there is a debate or an argument about the Judaism of people from Ethiopia, it is lacking answers,” Tamanu-Shata said at the center’s dedication. “We need this information to give it to our children, to give them a little light and a little knowledge against the ignorance and racism.”

Today, there are about 150,000 Jews of Ethiopian origin in Israel, but racism and discrimination against them has kept the community in a low socioeconomic bracket. According to a 2015 study from the Taub Center, just 20 percent of Ethiopian Israelis born in Israel or who arrived at a young age have advanced academic degrees, compared with 40 percent of the rest of the population. The average monthly cash income for Ethiopian families is 35 percent less than the average cash income for the rest of Israeli society. Among women who came to Israel after age 12, 50 percent work in cleaning or food industries.

“Even Israeli scholars and Israeli academics don’t know enough about Ethiopian Jewry, which should be central to modern Israeli life,” said Professor Ephraim Yitzhak, the director of the Institute for Semitic Studies in Princeton, New Jersey, who was in Israel for the dedication and offered a lecture about researching Ethiopian history at the center’s dedication.

“The lack of this knowledge contributes to the unfortunate problems also raised by social scientists about Ethiopians in Israel,” he added. “The problem that certain Jews are purer than others is a false pretension. It is an audacity of some scholars of Judaism. Ethiopian Jews are not any more or any less mixed. If anyone tells them they are ‘pure Jews,’ they are duping themselves, including leaders of the Israeli government. It is a blessing to come from a country like Ethiopia,” said Yitzhak.

Yitzhak said oftentimes when he addresses international Jewish communities that are surprised to hear about the existence of Jews in Ethiopia, he reminds them of a single fact. “Ethiopia is mentioned more than 50 times in the Bible,” he tells them, “and Poland not once!”

Photo: Professor Ephraim Yitzhak, the director of the Institute for Semitic Studies in Princeton, New Jersey, addresses the dedication of the International Center for the Study of Ethiopian Jewry at the Ono Academic College in Kiryat Ono on January 6, 2019.