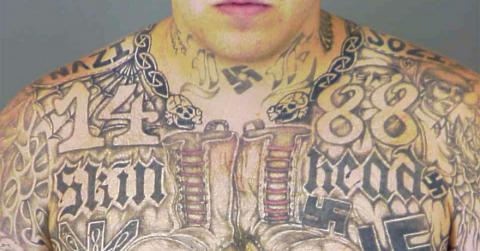 Antisemites and white supremacists make use of a secret code and lexicon to talk online while avoiding the gaze of algorithms and law enforcement, a new study has found. According to University of Haifa's Prof. Gabriel Weimann and web intelligence analyst Ari Ben-Am, the secret language works to recruit new followers and spread propaganda. The coded language makes use of certain coded phrases called "dog-whistles," which are only understood by members of certain groups.

Some are simple, such as calling Jews "Skypes," African-Americans as "Googles" and Latinos as "Yahoos." Others are more complex, with letters and numbers meant to indicate certain specific phrases, people or concepts. The numbers 88, for example, represents Heil Hitler, as H is the eighth letter in the alphabet.

The most sophisticated aspect of the language is through the use of visual cues, which often are shown manipulating already popular memes. According to the study, this is by far the most challenging for algorithms.

“It's clear that security, counter-terrorism, and government agencies, as well as social media platforms, are doing much to crack down on abuse,” Weimann said in a statement. “But we need to educate the operators of these companies that run social media platforms to report these violations and also teach their users how to spot them. A human eye is still much more savvy than a computer-generated algorithm.”

Weimann wrote a study in 2020 on the far Right's presence on the popular social media platform TikTok, and noted the widespread use of such coded symbols and messages to evade the algorithm and censorship.

The goal of this, Weimann claimed, was recruitment. “It’s a different audience. That means they [the far Right] are trying to seduce those that are the future fighters,” he told The Jerusalem Post at the time. “This is not about adults who will commit attacks within a day or two of seeing such content, but more about recruiting and seducing the next generation of far-Right extremists. The seduction is a gradual and sophisticated process, and all those extremists we find today as adults were exposed to extremist content online.”

And even more worryingly, these symbols and codes have been used before, with some high-profile incidents making use of this secret language including the January 6 US Capitol riot and the New Zealand Christchurch shooting.

Now, Weimann's next goal is to write a full comprehensive glossary of terms and symbols that make up this coded language. But in the meantime, he stresses how important it is for companies and law enforcement to be vigilant about hate speech that dodges the algorithm.

“Being Internet savvy and understanding what you're seeing online is important,” he explained. “We need to learn what they do, slow them down, and reduce their activity and efficiency. Words kill even if in a new language.”