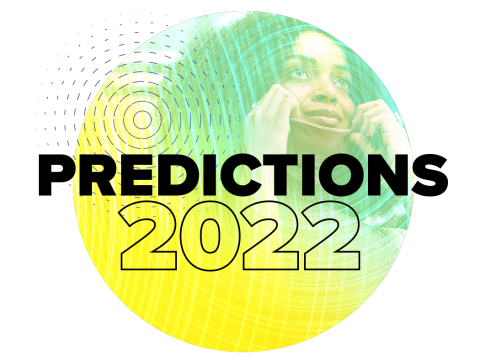 2021 was supposed to be the year of recovery: recovery from the coronavirus, recovery from the pandemic-induced recession, and – most of all – recovery of our normal lives. It didn’t entirely work out that way: all these recoveries have been fitful at best, with new variants of covid-19 putting up obstacles to normality.

But, in one critical area, we have indeed recovered. Yes, that’s right – our predictions for 2021 trends proved to be more or less spot on. After sweeping aside demands from our more academically minded colleagues for an impartial assessment of our performance, we have awarded ourselves an unprecedented 8 out of 10 points for last year’s predictions. This self-proclaimed triumph verges on clairvoyance and has encouraged all manner of hubris in this year’s predictions.

So, as pride goeth before a fall, here are our best ten best predictions for the key foreign policy trends in 2022.

1. The Democrats lose at least one house of the US Congress in the November mid-term elections.

Consistent with the historical pattern, the incumbent US party will take a drubbing in the mid-term elections. The Democrats will lose at least one house of Congress, probably both. This development will bring President Joe Biden’s legislative agenda to a screeching halt. But it will not spell the end of his presidency (even though many pundits will predict this in the immediate aftermath). Like many presidents before him, Biden will turn to areas he can control, particularly foreign policy, while he rails against an obstructionist Congress.

2. The US opens talks with Russia on the European security order, but there is no large-scale Russian invasion of Ukraine.

Russia will not follow through on its strong hints that it will invade Ukraine again in early 2022, while the United States and Russia will open a broad negotiation on the future of the European security order. But the Russian troop concentrations on Ukraine’s border and the military threat to the country will persist, looming over the negotiations like a Slavic sword of Damocles. Neither the talks nor the threat will come to an end in 2022.

3. The developed world learns to live with covid-19.

Vaccines and improved treatment options mean that covid-19 will cease to be very life-threatening in the developed world, even as the virus remains present and even common. Yet, in the many countries in the developing world that lack sufficient access to vaccines and anti-viral drugs, covid-19 will continue to pose a substantial economic and health challenge.

Macron’s victory in the French presidential elections will, according to most commentators, result largely from the flaws of his opponents. But French presidents are rarely known for their humility. Macron will follow in this grand tradition, claim a mandate for change, and – in cooperation with German Chancellor Olaf Scholz and Italian Prime Minister Mario Draghi – declare his intent to ‘relaunch’ the European Union. Observers will wonder what this means.

Orban’s Fidesz party will lose the Hungarian election to a newly unified opposition – or so outside election observers will assert. But, despite that, Orban will follow former US president Donald Trump’s playbook by claiming that he won. And he will improve upon Trump’s performance by actually remaining in power. This will create large street protests in Hungary and a crisis between Hungary and the EU.

Talks with Iran to restore the Iranian nuclear deal will go nowhere in 2022. To keep the pressure on, Iran will continue its steady progress towards a nuclear weapon, causing increased Israeli threats, various efforts at sabotage, and renewed fears of an Israeli or American strike on Iranian nuclear facilities.

7. A faction of the Afghan Taliban overthrows the government.

With Afghanistan in the throes of a massive economic and humanitarian crisis, a relatively liberal faction of the Afghan Taliban will overthrow the central government. The leaders of this faction will declare a break from the previous government and propose a more conciliatory policy on the international community. International donors will respond with vastly increased aid.

The Chinese government will persist with its rhetoric about meeting the challenge of climate change, but will fail to appreciably slow the growth of carbon emissions in China. Beijing will seek to obscure the methods for measuring emissions with promises to do better. As the US, Germany, and many other countries will miss their Conference of the Parties carbon reduction goals for 2022, they will not complain too loudly about China.

9. Protests against high energy prices and the European Green Deal break out across the EU.

A lack of progress on reducing carbon emissions will not stop protests against high energy prices and the associated European Green Deal from erupting across much of the EU and the United Kingdom. Member states will respond by blaming the EU and by lobbying Brussels for various exemptions from the Fit for 55 programme and, especially, the Emissions Trading Scheme’s expansion to the transport and housing sectors.

10. The EU anti-coercion instrument comes into being, but Chinese economic coercion continues.

The EU will enact its proposed anti-coercion instrument. But this will not deter China from using economic coercion against EU member states that cross Chinese red lines on issues such as Taiwan, Tibet, and Xinjiang. By the end of the year, the EU and its member states will be hotly debating whether and how to apply the anti-coercion instrument to various Chinese practices.

A company in the US will suffer the world’s first fatal private space accident. Although the private space industry’s safety record remains good overall, the very public loss of a former member of the ‘Star Trek’ cast will spur calls for regulation and even the renationalisation of the space industry.