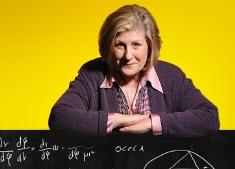 Nancy J. Nersessian's research is driven by the question "How do scientists think?" Nersessian's research focuses on how the cognitive and learning practices of scientists and engineers lead to creative and innovative outcomes. She is a Regents' Professor of Cognitive Science at the Georgia Institute of Technology with joint appointments in the Ivan Allen College of Liberal Arts School of Public Policy and the College of Computing School of Interactive Computing.
Her research supports the insight that scientists think not only with ideas, but also with the artifacts they create to investigate nature. Nersessian is one of the pioneers of the interdisciplinary field of cognitive studies of science and technology, which comprises psychologists, philosophers of science, artificial intelligence researchers and cognitive anthropologists.

What inspired you to choose this field of study?
I loved math from the moment I encountered it. I developed a passion for physics early on when my curiosity was piqued about Einstein. I wanted to be able to understand his mysterious theory and what it said about the universe. Later, I became curious about how he — or anyone —could create a totally new theory.

So, I was inspired to study math and physics, but in retrospect this was the beginning of my life as a philosopher and cognitive scientist. I just didn't know those fields existed. I started college as a physics major, but the way the courses were taught made them boring for me. I discovered philosophy though being required to take an introductory course as a junior.

In pursing the problems that interested me about how theories were created, I began to wonder about how the human mind reasons and imagines, and that led me to the new field of cognitive science. So, I wouldn't say I "chose" my field of study. It's more like I've stumbled into it through wanting to understand something.

What is the best piece of advice you ever received?
The best advice I ever received came from my mentor, Howard Stein, now an Emeritus Professor at the University of Chicago, when I started grad school. He said: Don't just read what philosophers say about science, read the scientists themselves.

As a physics student, it had never occurred to me that it was possible to read the writings of the people who had created the theories in the textbooks. I hadn't realized there were historical records such as diaries, notebooks, paper drafts and correspondence, all of which could provide insights into how their theories were constructed.

I was surprised when I first encountered the numerous sketches in Faraday's diary, the analogical models in Maxwell's writings and Einstein's use of thought experiments. These didn't fit the view of "the scientific method" I'd been indoctrinated with, and yet I was convinced that they were key to understanding how scientists think creatively.

What was your first scientific experiment as a child?
I never did experiments and I really didn't like science labs in school, especially biology labs. Anyone who was paired with me in science lab was unfortunate and often in danger since I was quite clumsy. I was always theoretically oriented. I won third place in the Boston Science Fair for my project which was a mathematical analysis of hyperbolic and elliptical functions.

What is your favorite thing about being a researcher?
That's hard to choose since there are several. One is having the freedom to pursue my intellectual interests wherever they lead me. I love the feeling of satisfaction that comes with finally understanding something after a long struggle with a problem. Closely related, is that I am continually learning new things in trying to address those problems.

Another is that having research funding enables me to hire Ph.D. students, postdocs and research scientists, and so I get to select the people that work most closely with me. Although people leave and join, there's always a group of creative interdisciplinary people and we have a great deal of fun thinking together.

What is the most important characteristic a researcher must demonstrate in order to be an effective researcher?
What I tell my Ph.D. students is that they need to have real intellectual problems driving their research and feel a passion for the research that will sustain them through the hard work, failures and difficulties that they will inevitably encounter along the way.

What are the societal benefits of your research?
A major societal benefit is the part of my research that aims to improve undergraduate and graduate science education. My own disappointment as a physics student and my experiences as a teacher finding students who are passionate about science when they enter the university — and who are quickly turned off— piqued my interest in creating more effective approaches to science education.

I took encouragement from the fact that my early research on conceptual change and model-based reasoning was influencing K-12 science education researchers. I wanted to explore what could be done at the university level, and was struck by the facts that research labs are largely populated by graduate students and undergrads and that, along various measures, they appear to be quite successful sites of learning.

Together with Wendy Newstetter, also a researcher at the Georgia Institute of Technology, I embarked on designing a "translational model of learning research." We investigate cognitive practices in interdisciplinary engineering science labs, what is required to learn these, and what factors in the "learning ecology" of the labs support and sustain creative research. Along with science and engineering faculty, we develop ways of translating these into instructional settings so as to promote learning.

Who has had the most influence on your thinking as a researcher?
Being an interdisciplinary researcher, there have been several people who have had significant influences on my thinking, and I have continued to encounter others as my research has taken new directions. But, I think the best answer is simply: my teachers.

As far back as I can remember, there has always been a teacher who encouraged my interests and aspirations. I was the first in my family to go to college. I had scholarships for tuition, but had to work to support myself. I would not have considered going, and might not have stuck with it through the hard times, if it were not for the encouragement of teachers I encountered along the way. I'm grateful to all of them.

What about your field or being a researcher do you think would surprise people the most?
How difficult research is, how much focus it requires and time it consumes, and how much fun hard work can be.

If you could only rescue one thing from your burning office or lab, what would it be?
It would have to be two things: my laptop and my brother David's Purple Heart, which I keep next to the laptop on my desk to remind me of him and of how fortunate I was to have gone to college and not to fight in Vietnam.

What music do you play most often in your lab or car?
I can't have music playing when I work because I get absorbed into it. In my car and home I listen mostly to classical vocal music and opera. For much of my life, my avocation was singing and I trained and performed to near professional level in recitals and operas. Now I sing along in my head as I listen.

Editor's Note: The researchers depicted in ScienceLives articles have been supported by the National Science Foundation, the federal agency charged with funding basic research and education across all fields of science and engineering. Any opinions, findings, and conclusions or recommendations expressed in this material are those of the author and do not necessarily reflect the views of the National Science Foundation. See the ScienceLives archive.