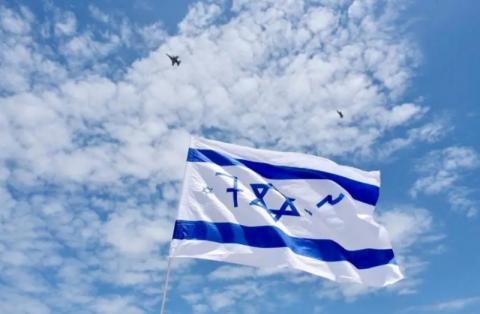 Amid the coronavirus pandemic, a survey published Sunday by the Israel Democracy Institute (IDI) ahead of the country’s 72nd Independence Day traced a surge in the number of Israelis who identify with the state and view its problems as their own.

The increase in the sense of belonging was particularly significant among two groups that are normally sidelined but have now been hit relatively hard by the COVID-19 outbreak: ultra-Orthodox Jews and Arab Israelis. Both communities have historically had a rocky relationship with Israel’s secular Jewish establishment, and normally tend to have the weakest sense of solidarity with their state’s leadership and institutions.

The survey was conducted by the IDI’s Guttman Center for Public Opinion and Policy Research on April 22-23, among 762 respondents contacted by phone and constituting a representative sample of Israel’s adult population. The margin of error was 3.7%. It was published ahead of Israel’s 72nd Independence Day which will be marked on Wednesday.

It found that 90 percent of Israelis — 92.5% of Jews and 77% of Arabs — answered that they feel they are an integral part of the state and share a common destiny “very much” or “quite a lot.” It is the highest figure recorded for a decade in the annual survey.

The highest leap was among Arab Israelis, who have for decades complained of marginalization and discrimination. Last year, just 42% of respondents said they felt part of the state. Asked to explain the radical 35 percentage-point increase in one year to 77%, Dr. Or Anabi, who conducted the survey, told The Times of Israel that the coronavirus crisis could explain part, but not all of it. He urged caution regarding this particular figure, saying it could have been very different had the survey been conducted a week earlier or later.

A big surge was also recorded among the traditionally insular ultra-Orthodox community, parts of which normally shun the state and its institutions but were forced recently to cooperate with authorities in the battle against the coronavirus as Haredi cities became hotspots for infections.

While in May 2019 just 68.5% of ultra-Orthodox respondents said they felt they share the State of Israel’s fate, that figure has now swelled to 93.5%. The Israeli communities with the highest rate of virus infections are predominantly ultra-Orthodox and Arab. From 2014 and 2019 the rate of Jews who felt a sense of belonging was between 83% and 87%. The rate among Arab Israelis was only between 35% and 62%.

The survey also found that 63.5% of the population — 67% among Jews and 44% of Arabs — believe the country has generally had more successes than failures since its establishment. Just 8% think the failures outweigh the achievements, which breaks down to 6% of Jews and 19% of Arabs.