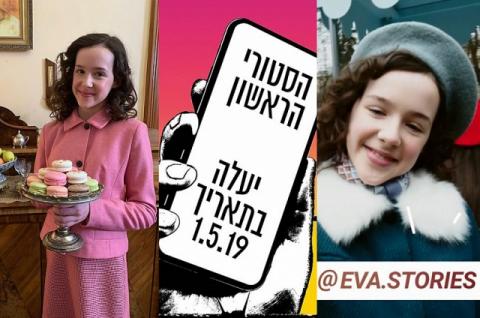 Eva Stories, a Holocaust education project based on the true story of a Jewish girl in Hungary who was killed in the Holocaust, was recognized in two separate categories at the 24th Annual Webby Awards last week. The awards are considered the highest honor for digital content and have been dubbed the “Oscars of the Internet.”

Eva.Stories was a Webby Awards 2020 nominee in the category for best series and campaigns in education and discovery, and an honoree for best use of social media within an advertising or marketing campaign. There are two winners for every category, five nominees, and a number of honorees, an achievement granted to the top 20 percent of the 13,000 projects submitted in this year’s competition.

Eva.Stories was launched last year on Instagram ahead of Holocaust Remembrance Day in Israel, telling a social media version of the story of Eva Heyman, a 13-year-old girl living in the city of Nagyvarad when the invasion from Nazi Germany struck in Hungary late in World War II, beginning in March 1944.

The series of Instagram stories, 220 in total, was based on Heyman’s diary and chronicles her life prior to deportation in snippets. The project tells her story as if smartphones and social media existed at the time of the Holocaust.

The stories begin with videos of Eva, portrayed by a British actress, laughing with friends, buying ice cream with a love interest, dancing, and blowing out birthday candles. In the series of clips, she speaks animatedly about living with her grandparents and becoming a famous news photographer in London one day.

The videos quickly take a dark and horrific turn, showing a passing elderly man calling Heyman a “dirty Jew” one day, Nazi soldiers staring at her while they sit on tanks and march in the street as they invade her city, moments of terror and intimidation as she and her family are forced to wear the yellow stars, and finally deportation.

The project features images and passages from the journal, which Heyman started on her 13th birthday on February 13, 1944. Her last entry was on May 30, 1944, a few days before her deportation. Heyman and most of her family were killed at the Auschwitz death camp in Nazi-occupied Poland.

Heyman’s mother, Agnes Zsolt, survived the Holocaust and found the diary when she returned to Nagyvarad, according to the New York Times. She later ended her own life.

Heyman’s diary was selected by father-and-daughter creators Mati Kochavi, an Israeli tech executive and the founder of a number of tech companies (AGT, 3iMIND, Vocativ), and Maya Kochavi, among at least 30 other journals kept by teenagers during the Holocaust.

After the accolades were announced, Mati and Maya Kochavi said in a joint statement cited by Israeli media: “The people of Israel made Eva.Stories what it is by embracing it, loving it, and following it.”

The recognition “is significant in refocusing public attention on the life of Eva, a 13-year old girl who suffered the horrors of Auschwitz, because she was Jewish. That was the goal we had sought to achieve in creating Eva’s Story,” they said.

Eva.Stories was filmed in Ukraine over some three weeks in 2019 with a 400-strong production team that sourced actors, trucks, tanks, motorcycles, and clothing from the era. The Kochavis’ media company, K’s Galleries, said it essentially created a new “genre,” an Instagram film of 50 minutes rolled out as 220 stories of 15 seconds.

“This allowed for a real peer-to-peer experience which made it feel like Eva was the owner of her [Instagram] account,” K’s Galleries said, adding that it devised new rules and processes including filming with two connected smartphones and of course shooting vertically, to achieve the desired result.

The project sought to “bring history to the youngest social media generation” through Instagram, where “the majority of young people already spend much of their time,” the company said. The series gave them a “real story, told in their language and on their terms, as a way to relate to very complicated historical moments.”