The European Parliament recalls the victims of the Holocaust 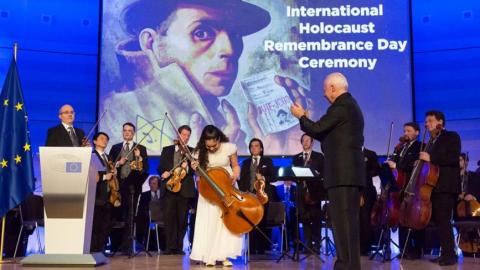 For the first time ever, the European Parliament’s annual event to commemorate International Holocaust Remembrance Day marked both the Holocaust of six million Jews and the Genocide of Roma and Sinti populations at the hands of the Nazis and their collaborators. The main ceremony, held on Wednesday afternoon, was preceded by the launch of an exhibition about the Roma and Sinti victims of the Nazis.

“The meaning of this exhibition is to give visibility to the Roma Holocaust, and that’s what we want to achieve – more knowledge about the Roma Holocaust,” Soraya Post, MEP, rapporteur on Roma fundamental rights, told The Jerusalem Post. She said the joint commemoration gives an important message to mainstream society: “that all victims suffered the same thing by the same perpetrators during the same era.” “We should be concerned by what we see in Europe today,” Post told the audience. “We cannot accept neo-Nazis marching in the streets. Please join us in this fight,” said Post, whose father was Jewish and mother Roma.

At the formal ceremony that followed the opening of the exhibition, European Jewish Congress president Dr. Moshe Kantor noted that discrimination against Jews, Roma, homosexuals, the disabled and political dissidents, all of whom were targeted by the Nazis, is not a thing of the past.

Both Kantor and Knesset Speaker Yuli Edelstein, who also spoke at the event, made note of antisemitic incidents that occurred in Europe in the past year. “Because of the constant threat, synagogues and Jewish community centers in many European countries have been put under massive, 24-hour police protection,” Kantor said. “Less than a month ago, synagogues in Malmo and Gothenburg were firebombed because of the absurd belief that European Jews are to be blamed for a diplomatic statement from a leader, thousands of miles away, describing the self-evident truth that Jerusalem is the capital of Israel. Attacks on Jewish individuals and institutions cannot be justified and are unacceptable in any context.”

Stressing that the European Union must put more measures in place to fight antisemitism, he concluded that “the lessons of the Shoah should have a strong and decisive follow-up.” For his part, Edelstein delivered a message similar to the one he conveyed to the Belgian Parliament the day before: that for all the good work that had been done to commemorate the Holocaust, much is left to be done. “Ladies and gentlemen, Let me draw your attention to the following events that took place in a single year: The Jews in Bochum, Germany, felt compelled to hide their identities, for fear of attack. In Gothenburg, Sweden, a synagogue was firebombed. In Vienna, London and Berlin, rallies called for death to the Jews. This was not in 1933.

These were headlines from the last year – 2017,” Edelstein emphasized. “Seven years ago, I stood here and asked, ‘What have we learned?’ Today, following these 2017 events, I ask you once again, ‘What have we learned?’” First Vice President of the European Parliament Mairead McGuinness told the audience: “Dedicating one day of the year to commemorating the Holocaust is also about the future and the role of future generations.

“We need to teach the future generation about the Holocaust so it could never happen again.... The notion of ‘never again’ is deeply ingrained in the psyche of the EU,” she said. “Seven decades after the Holocaust, we have few survivors left with us. This is now the duty of the new generation to keep the memory of the victims alive.”

Holocaust survivor Tomás Radil shared with the audience his experience of living through Auschwitz, recounting how he survived the “selections” of the notorious SS physician Josef Mengele, also known as the “Angel of Death.” “We approached Mengele, we behaved in a German military way and showed we were just eager to serve the German Reich, and that’s why I’m here today,” he recounted. He also recalled “a day in July when more than 300 Roma were killed in a single night and nobody remained alive.”

Radil remarked that only 74 years have passed since the Holocaust. “From a historical point of view, that’s nothing. Mass killing, genocide, is still a very possible solution to some problems. That is my warning,” he concluded.