Europe, the Orient, and the changing image of the Jews 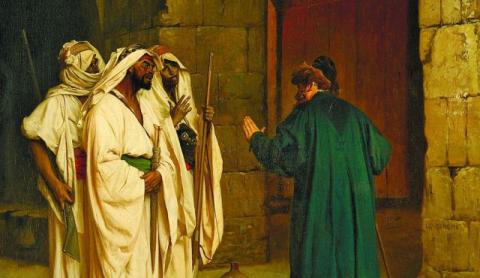 A recent museum exhibit in Paris delved into the question of how Orientalism has changed the image of the Jew in Europe, for both Christians and Jews.

Earlier this year, the Musee d’art et d’histoire du Judaisme, in Paris, brought together works of art from over 40 museums in Europe, Israel and the United States that in some way reflect how to Europeans, over the course of the 19th and early 20th century, Jews became associated with the “Orient.”

For most of its history, “Orientalism” referred to the study and representation of the “Orient” − the Muslim world − in Western art, architecture, literature, music and scholarship. Yet today, Orientalism is more commonly understood as a frame of mind wherein the “Orient” exists as a fantasy place at the periphery of civilization ‏(the Occident‏). In no small part due to the influence of the late literary scholar Edward Said, Orientalism is perceived as a mode of Western imperialism: a means to dominate the East as much as to describe it.

From the earliest encounters by French artists with African Jews during and after the Napoleonic campaigns, to the internalization of an Oriental self-image by self-described “New Hebrews” − Jewish artists who had moved from Eastern Europe to Palestine in the early 20th century − the exhibit ‏(which ran from March through early last month‏) and its beautifully illustrated companion volume looks at the relationship between the Jews and Orientalist art from a variety of European and Jewish perspectives.

Several French museums have in fact held exhibitions in recent years examining Orientalism. As Laurence Sigal-Klagsbald, the director of the Paris Jewish Museum, points out in his introduction to the catelog, the continued interest in Orientalist art suggests that the polemics that resulted from a critical look at colonialism clearly did not discredit or devalue the visual art ‏(or, one might add, music and literature, either‏) that is a byproduct of European colonialism. In identifying the Jews as a connecting point between Orient and Occident, this exhibit attempts, as one of its curators, Nicolas Feuille, told me, “to go beyond the schematic view of Edward Said.”

Each of the catalog’s five excellent essays − by the art historians Sigal-Klagsbald, Christine Peltre, Alexis Merle du Bourg, Yigal Zalmona and Perrine Simon-Nahum − examines a different aspect of Orientalism’s trajectory, from its historical context in the early 19th century to the scholarly debates about Orientalism today. Like the exhibit, the catalog focuses on the question of how Orientalism changed the image of the Jew in Europe, for both Christians and Jews. According to Sigal-Klagsbald, how Christian artists viewed North African and Middle Eastern Jews developed in stages: They saw them successively “as ethnographic subjects, exotic figures, negative mirrors of Europe, fantasy objects ‏(positive or pejorative‏) about an ‘ancient race,’” before Jewish artists in Europe and Palestine in the early 20th century began to employ the image of the Oriental Jew in their own art and in their search for new identities. As such, the exhibition looks at Jews both as subjects and artists.

The initial idea for an exhibit on Jews and Orientalism was to focus on Eugéne Delacroix’s trip to North Africa following the French conquest of Algiers, in 1830. While accompanying a French diplomatic mission as an official artist, Delacroix made many sketches and drawings that would form the reference for his later oeuvre of Orientalist painting, and inaugurated the depiction of the “Jewish type” − usually female − in the genre. Other French artists, such as Theodore Chasseriau and Alfred Dehodencq, both of whom began to paint in Morocco and Algeria in the 19th century, looked to Jewish subjects possibly because they proved more willing than the Muslim population to sit for portraits, and possibly because they were fascinated by the striking difference in appearance between the North African Jews they encountered and the European Jews they were familiar with, either from life or from artistic depictions.

The painters were attracted to the lively activities and bright clothing of Jewish festivities. Dehodencq, who lived in Morocco between 1853 and 1863, used sketches to paint “Jewish Wedding in Morocco” and “Jewish Festival in Tangier” both of which have women at their center. The Jews in these works, especially the exotically dressed and sexually suggestive women, appear as a romanticized remnant of pre-Christian Jews. In the former canvas, the Jewish bride, with large gold earrings and adorned in a gold bolero and flowing red robe, stares seriously, even nervously, at the artist. In contrast, the bride’s black African servant stands behind her, leaning against the wall with a relaxed and knowing smile.
The last painting of the section about the “discovery” of Oriental Jews, by William Wyld, depicts Jews departing Algeria for the Holy Land, making it a beautiful segue into a series of 19th-century paintings of Jerusalem and its surroundings by European artists. In Wyld’s technically detailed canvas a crowd of hundreds, if not thousands, of Jews and onlookers gather outside the walls of Algiers. It is up to the viewer to discern the many facial expressions and small dramas that abound, and differentiate between those who are about to board the waiting ships and those staying behind.

Intimacy of the Wall

Notable among the Jerusalem landscapes, paintings by Vasily Vereshchagin and Alexandre Bida ‏(both titled “Solomon’s Wall”‏), depict men, women and children pressed against the Western Wall in prayer. In Vereshchagin’s painting, one can feel the intimacy of the Wall as a prayer space before the open plaza was constructed in front of it in 1967. The image of men and women praying side-by-side in the painting ‏(corroborated by a photo in the catalog from the museum’s permanent collection‏) is a stark contrast to the strict gender separation there today.

European artists traveling to the Holy Land in the 19th century believed that they could come closer to authentically representing the Bible by using Middle Eastern Jews, Bedouins and Arabs as subjects. The Orientalization of biblical art has its origins not only in colonialism, but also in the influence of Rembrandt and the anti-classical trend in European art, which was growing at the time, as well as the popularity of written historical works such as Ernest Renan’s 1863 “The Life of Jesus,” which situated the emergence of Christianity in its Roman and Jewish setting. Later in the century, Jewish artists such as Lesser Ury ‏(whom a young Martin Buber called a “poet of the Jewish soul”‏) and Maurycy Gottleib painted scenes from the Hebrew Bible and the New Testament, with the intention of either giving these texts universal significance or explicitly linking the origins of Western civilization to the Jews. In one self-portrait echoing the style of Rembrandt, Gottleib − a Galician Jew − went so far as to paint a personalized fantasy of himself as an Arab: turbaned, with sword in hand, he created an exotic Oriental alter-ego.

When Jews eventually attempted to construct a Hebrew national art, first in Ephraim Moses Lilien’s Jewish- and Zionist-themed art and then through the Bezalel art school in Jerusalem, a number of elements in their relationship to Orientalism appear to come together. Lilien used biblical imagery and romanticized Jews in Arab and Bedouin dress − in tapestries, graphic art, lithographs, and other media − to make explicit the connection between them and the Land of Israel.

While Bezalel’s founder, Boris Schatz, hoped the school would create the symbols for a new Hebrew national culture in Palestine, he also believed that in doing so the school itself would become a powerful national symbol. Nonetheless, there is little in the paintings in the final section of the exhibit, which displays the works of artists who attended Bezalel, that was quite so identifiably nationalist as, say, Lilien’s lithographs of biblical prophets or his photographic portrait of Theodor Herzl ‏(Lilien helped Schatz to establish the school‏). Reuven Rubin, Pinchas Litvinovsky, Nachum Gutman and Arieh El-Hanani all used Impressionist and Cubist techniques to paint Arabs and, especially, Middle Eastern Jews, such as those from Yemen. These pieces, unlike the Jugendstil-influenced works of Lilien and Schatz, don’t overtly project a nationalist message or identifiably seek to put art in the service of the national movement. Yet the artists participated in the building of a new Hebrew culture through their involvement in the school and the creation of an artistic style that took Israel and its inhabitants as its subject.

If there is one question the exhibit and essays leave unexplored it is why the Bezalel painters included in the show − all seven of whom were born within 10 years of each other in different parts of Eastern Europe − decided to move to Palestine. While sometimes influenced by Schatz’s personal lobbying, these artists were far removed from the Zionist politics of Vienna and Cologne. Did this group seek to build an artistic dimension to the politics of Herzlian Zionism, as the exhibit and volume suggest? Or rather, in my mind more likely, was there something inherently attractive to these men, like others, about painting somewhere exotic, and about the possibility for self-transformation?

One aspect of Western Orientalism highlighted by this exhibit − and ignored by Said − is its fundamentally Christian basis. There is a reason Orientalist art was more concerned with the North African and Middle Eastern world of Islam and Judaism than the Far East, namely the adversarial relationship that these latter two faiths had to Christian history. For over a millennium, the Mediterranean had been divided into Christian and Muslim domains, with a shifting frontier.

As the Ottoman Empire crumbled and the European powers ventured into North Africa, Arabs increasingly replaced Turks as representative of the Oriental in Western art. Still, Muslims remained at Europe’s periphery when compared to Jews − who lived, traded and migrated throughout the very center of Europe. And it is natural that with Jews frequently depicted at the center of North African and Middle Eastern history and society, Orientalism would influence how Europeans viewed the Jews who had long lived in their midst. Anti-Semites for example, especially in Germany and Austria, used Orientalist scholarship to argue against Jewish civil equality on the grounds that Jews had always been, and would remain, Oriental − foreign strangers in Europe.

This exhibit leaves out the other side of the equation: that European Jews also resisted and disputed their Orientalization, connected as it often was to those seeking to reverse their emancipation. Although many European Jews in the 19th and early 20th centuries went to great lengths to emphasize their Europeanness, one can’t escape the fact that European Jews also became fascinated by their growing association with the Muslim Orient, evidence of which can still be seen today, not least in the beautiful synagogues built in the Moorish style by cosmopolitan Ashkenazi elites, and still standing in New York, St. Petersburg, Budapest, Stockholm, Florence and many other cities. Creating further ambiguity, as the European colonial footprint grew in North Africa and the Middle East over the course of the 19th and early 20th centuries, many of the Jews in those places cast themselves as the Europeans of the Orient − adopting French, English and Italian − in a mirror image of the Jews’ Orientalization in Europe. And in perhaps the greatest irony of all, after many years of Occidental and Oriental Jews merging in the imagination of Europeans, Jews built a self-consciously European state, albeit in the Middle East, that both reinforced and challenged in new ways the divergent identities of Jews coming from the Christian West and the Muslim, or Oriental, East.