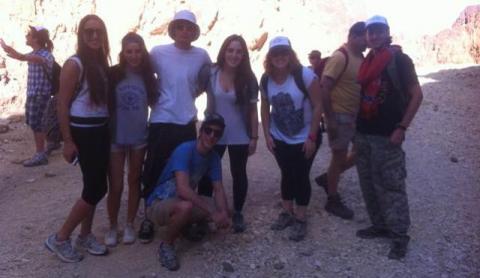 The absorption process can be especially trying for teenagers, who must contend with heightened social and academic pressures on top of the usual difficulties associated with moving to a new country.

At his public school in New York, Arad Horovitz was a popular honors student with a knack for math. After his family moved to Israel in 2009 and the 13-year-old transferred into an Israeli middle school in Ra’anana, however, his grades plummeted and he had trouble making friends. “He totally shut down,” said his Israeli-born mother, Yael. “It was all because of the language. He just didn’t know Hebrew well enough.”

The school in Ra’anana offered little support, Yael said, so she pulled Arad out and enrolled him in an English-language high school program for new and returning immigrants at the Hakfar Hayarok youth village and school in Ramat Hasharon, which has a mix of boarding and day students. Although he had to skip a grade to join the program, he soon began to flourish academically and socially. “It was like he was a different person,” Yael said.

Over the years, Bacher said she heard from many parents who struggled to find a school for their teenaged children that would help them assimilate into Israeli society without sacrificing their academic progress. Having previously studied and worked at Hakfar Hayarok, Bacher raised the idea with administrators there of starting a high school track that would prepare immigrant students to take the bagrut, or matriculation examinations, in English. The school signed off and Bacher began to recruit students through the immigrant assistance organization Nefesh B’Nefesh and word of mouth.

The program opened in September 2010 with 40 students in grades 9 through 12. But a few months into the first year, it became clear that there had been a “misunderstanding” with the Education Ministry over its bagrut language policy and that some of the enrolled students might not be able to graduate as a result. The policy states that children who arrive in Israel after reaching age 15 can take the exams in Russian, Amharic, English, French or Spanish, while children who arrive before reaching age 15 (or before entering 10th grade) or who were previously enrolled in the Israeli school system are considered “veteran” immigrants and are required to take their exams in Hebrew.

“We made a lot of checks before and we understood that it’s possible that all of the students can take the bagrut in English,” the school’s principal, Kobi “Sisco” Naveh, said this week. “It was a misunderstanding. We did our best to change the rules but we failed.”

Naveh said he petitioned the then-director of the Education Ministry, Shimshon Shoshani, to accommodate the students, to no avail. Shoshani told Haaretz that he did not recall discussing the issue with Naveh. He called the bagrut language policy “logical,” explaining: “We would like the students to integrate into society. If I immigrate to the United States, don’t I have to take the SAT in English?” (The SAT is more similar to the Israeli college entrance exam, known as the psychometric, than to the bagrut, which tests knowledge in subjects such as Bible and math that are studied as part of the high school curriculum.)

In a statement to Haaretz on Thursday, the ministry said: “The manner in which new immigrants and returning citizens take the bagrut examinations is currently under review.” After the discrepancy came to light, Hakfar Hayarok gave each affected family the option to stick it out and appeal individually to the ministry for leniencies, such as extra time for the children to take the exams in Hebrew, or to leave. Bacher resigned suddenly, and the school decided not to recruit any more students.

Some children did receive leniencies, Naveh said, while others were pulled out of the program. He said most but not all of the program’s 25 graduates had a full bagrut, which is considered a prerequisite for gaining entry to elite army units and universities. Parents of current and former students contacted by Haaretz this week said there was much to recommend the Hakfar Hayarok program, including the dedicated teachers and small class sizes. But some complained that it was unorganized at first and that they had been misled about the bagrut issue.

“When they started, they didn’t have enough teachers and it took some time until it felt like a stable program,” said Galit Sorek, whose son Yarden grew up in Singapore and begged his parents to allow him to return to Israel, where he was born, for high school. Since she would be sending Yarden back to Israel on his own, Sorek said she chose the program at Hakfar Hayarok because he could live in the youth village. “I really think this program had a lot of potential,” Sorek said. “But the school just gave up on it.”

Another parent, Gary Cohen, said the school was less than forthcoming about the discrepancy with the Education Ministry. Ultimately, he said, he blames the government for “sabotaging” his son Liam’s education and potentially alienating young immigrants from Israel. “The ministry went out of its way to stop the program from ever taking flight,” Cohen said. “The kids who went there had a huge capacity to be of great benefit to this country, but I would imagine that 70 to 80 percent will study [at universities] abroad and perhaps live abroad.”

Cohen, who hails from Scotland, said he petitioned the ministry for permission for his son, who was 11 when he arrived in Israel, to take the bagrut in English and received it but that the necessary paperwork was never processed. After his repeated requests for an explanation were ignored by the ministry, Cohen said he gave up and removed his son from the Israeli public education system altogether.

A Zionist kid at an Arab Christian school

Liam, now 16, travels on two buses for up to an hour and a half every morning to attend the Tabeetha School in Jaffa, which has a large contingent of local Christian and Muslim students. “It’s ironic that my Zionist kid has to go to an Arab Christian school to get an education in Israel,” Gary said.

In conversations with parents, the shortage of conveniently located, affordable high school programs for English speakers in Israel was a common gripe. Nefesh B’Nefesh lists a handful of options on its website, including the Na’aleh Elite Academy program run by the Jewish Agency at four different campuses, Ohr Moshe in Ramat Beit Shemesh, the Jerusalem American International School and the Walworth Barbour American International School in Even Yehuda.

The Hakfar Hayarok program was conceived as an alternative to the current programs, many of which Bacher said cater to the children of diplomats or itinerant businessmen and therefore do not encourage Hebrew proficiency or integration into Israeli society. They can also be prohibitively expensive, she said. “We were taking trips, doing everything for an [immigrant] to immerse slowly, in a healthy way,” Bacher said. “We still believe there’s a need for something like that, but the door is not open for it.”

One English-language school that has enjoyed early success is Yerushalayim Torah Academy, which has separate campuses in the Jerusalem area for boys and girls. Founded five years ago by Rabbi David Samson, the school combines religious and general studies and has graduated 21 students, many of whom went on to study at yeshiva and simultaneously serve in the army. “People still shudder at the thought that children are learning in English in Israel,” said principal Rabbi Bezalel Borstein, who said the bagrut policy has also presented problems for some of his students.

He noted that the Education Ministry has a committee that decides on leniencies for students with learning disabilities and that a similar committee should be set up to hear cases of immigrant students who struggle with the language, no matter at what age they arrived in Israel. “I feel that’s a simple solution, but I haven’t been able to convince them that it’s something that could work,” Borstein said.

Despite the failure of the English-language high school track at Hakfar Hayarok, Naveh, the principal, said that the school will try again in September 2014, when it plans to launch an International Baccalaureate program in partnership with United World College. While ideal for immigrant students, he said they will have to compete with Israeli-born applicants for a select number of spots.