England’s Stonehenge was erected in Wales 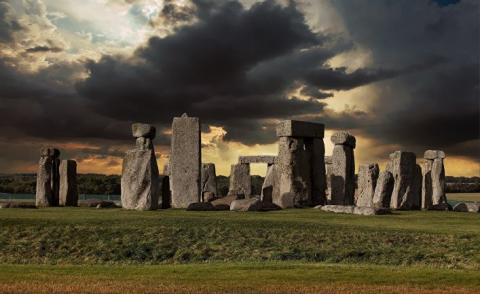 Around 3200 B.C.E., Stone Age farmers in Wales’s Preseli Hills built a great monument: They carved columns of unspotted dolerite, or bluestone, from a nearby quarry, then thrust them upright in a great circle aligned with the Sun.

Exactly what the circle meant to them remains a mystery. But new research reveals that several centuries later, their descendants took down many of the giant stones and hauled them 200 kilometers to the Salisbury Plain, where they created what is still the world’s most iconic prehistoric stone monument: Stonehenge.

The paper’s authors “make a very good argument Stonehenge is a dismantled stone circle from Wales,” says Alison Sheridan, a curator emerita at the National Museum of Scotland who was not part of the research team. “They dealt with very tricky data but came up with a brilliant hypothesis.”

Researchers had already traced Stonehenge’s slabs of bluestone to the west coast of Wales; they’d even identified some of the quarries where the stones were extracted more than 5000 years ago.

But radiocarbon dating showed a puzzling gap of several centuries between activity at the bluestone quarries and the earliest construction at Stonehenge. Researchers wondered whether the distinctive, 2- to 3-meter-tall bluestones had been used to build other stone circles first, then moved to Stonehenge later. “They’re clearly not spending 200 years slowly moving them across the landscape,” says University of Southampton archaeologist Joshua Pollard, one of the co-authors. “It always seemed likely they were dismantling existing monuments.”

Over the past decade, researchers led by University College London archaeologist Michael Parker Pearson searched for ritual structures in the Preseli region that might have provided the stones—and the blueprint—for Stonehenge. In 2017 and 2018, they excavated parts of an ancient monument called Waun Mawn, where a handful of toppled bluestones similar to those at Stonehenge form a partial circle.

The excavations revealed distinctive socket-shaped pits where other stones had once stood. Connecting the dots between the empty sockets and toppled bluestones at Waun Mawn, researchers sketched out a circle 110 meters across—the same dimensions as the outer earthen ditch that was part of Stonehenge’s original layout. (The ritual center was rearranged multiple times over its 1000 year life span.) And, like at Stonehenge, the circle’s entrance was oriented toward sunrise on the midsummer solstice.

Parker Pearson’s team then measured the last time sediments inside the socket holes at Waun Mawn had been exposed to light, using optically stimulated luminescence; they also radiocarbon dated charcoal found inside the pits. They estimate the missing stones were erected between 3400 and 3200 B.C.E. and then removed 300 or 400 years later, around the time the first construction at Stonehenge began, they report today in Antiquity. “We’re quite confident the reason they come down is they’ve gone to Stonehenge,” says Parker Pearson.

Researchers say the dismantling of Waun Mawn and the rise of Stonehenge could have been part of a larger migration from the Preseli Hills to the Salisbury Plain. Human and animal remains found at Stonehenge have chemical signatures suggesting their early years were spent on the Welsh coast. “We’ve got regular contact between the two regions,” Pollard says.

The results add to an emerging picture of Stonehenge’s origins in a complex, interconnected region centered on the Irish Sea that flourished in the fourth millennium B.C.E., Sheridan says. “People and ideas and objects were moving over long distances, and the movement clearly had to do with the way society expressed power,” Sheridan says. “Uprooting stones is a classic example.”

Back in the Preseli Hills region, radiocarbon dates and pollen evidence suggest that millennia of farming and human occupation ended around the time the Waun Mawn circle was dismantled. “Evidence for human activity drops around 3400 B.C.E.,” Parker Pearson says, though researchers aren’t sure why the people left.

The researchers say the migrants from Wales might have relocated the stones as a way to stay symbolically connected to their past—or to draw on their ancestors’ authority to claim a new region. “They’re bringing ancestral symbols as an act of unification,” Parker Pearson says.