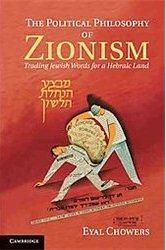 A political scientist examines the ways the Zionist project looked at language and time. Is there something inherent in Hebrew that made it unsuitable for building a state?

Which is not to say that “The Political Philosophy of Zionism” is a politically tendentious book. It was Labor Zionism that sculpted the Jewish state, and the ills and inequities of Israeli society can’t be pinned on any one party, left or right. Insofar as the book has an agenda, it is to point out the inadequacy of modern Hebrew in addressing the complex challenges facing Israeli democracy, on both sides of the Green Line. Israel lacks canonical documents of political philosophy akin to the Federalist Papers, which spelled out the values of American democracy in the late 18th century. Whereas literature has blossomed in Israel, writes Chowers, “the political uses of language have been of questionable importance and have most often demonstrated little imagination and ingenuity.” Without “shared, elevated and taken-for-granted texts and vocabulary,” he concludes, “the Israeli public sphere lacks the foundation necessary for developing debates and deliberations.”

Where did Zionism go wrong? And how can we make it right? The two questions may fairly define a genre of writing about Israel today. And for good reason: In the Jewish world, who is not unsettled and anxious? The ultra-Orthodox feel persecuted by the secular democratic Jewish state. Right-wingers warn direly of creeping left-wing universalism, not to mention global anti-Semitism. Liberal Zionists fulminate against the corrosion of democratic values in Israel, lamenting the decay of a once-brilliant experiment built at intolerable cost: the displacement and occupation of the Palestinian people.

Eyal Chowers, a political scientist at Tel Aviv University, cooks at a cooler temperature. He focuses not on ideology or national security, or the cauldron of religion and state, but rather on philosophical issues entailed in the Zionist project. This is a book about such subjects as time, language and constructed identities. The tone is academic, and sources include Kant, Hegel, Max Weber and Heidegger, yet the prose is fluent, often striking. The author does not intend to sound alarms, raise hopes or propose solutions. With keen and unusual insight, he endeavors to present a balanced and objective account of what we are doing here, and why we do it.

Zionism, Chowers argues, represented a revolution in Jewish thinking about time. The optimistic faith in universal progress championed by Enlightenment philosophers was shaken by 19th-century realities. Jewish religious teleology − messianic yearning that encouraged passivity and procrastination − no longer sufficed at a moment of historical crisis. Secular Jewish thinkers articulated pragmatic strategies for harnessing memory and tradition in the pursuit of a national project of self-redemption: “Zionism was a bold revolution with one foot leaping backwards.” Borrowing a coinage from the philosopher Walter Benjamin, Chowers writes that many Zionists “saw themselves as creating a new nowtime, a new constellation in which the ancient Hebraic times and their own epoch become profoundly attached and transform each other.”

Among the author’s achievements is to contextualize Zionism within a broader body of modern European thought. He concludes, for example, that Zionism “had a Janus face: a Proustian sense that reliving distinct memories is a source of energy that infuses actors with profound joy, and a Freudian belief that it is possible to heal a national trauma only by going back in time to the childhood of the nation, to the moment when and the place where this trauma had commenced.” The Proustian piece − which Chowers links with the earthy, mystical Zionism of A.D. Gordon − translates into a sensual connection with the Land of Israel; the Freudian element buttresses the narrative of exile and return.

Alongside Gordon, Chowers invokes a worthy Sanhedrin of Zionist thinkers: forerunners Judah Alkalai, Zvi Hirsch Kalischer and Moses Hess; the indispensable Leo Pinsker; the Marxist Ber Borochov and Nietzschean Micha Josef Berdyczewski; and, of course, Theodor Herzl and Ahad Ha’am, Ze’ev Jabotinsky and David Ben-Gurion, topped off by Gershom Scholem and S.Y. Agnon. It was Berdyczewski who declared, in an essay called “Wrecking and Building”: “We have arrived at a point where two worlds collide: To be or not to be! To be the last Jews or the first Hebrews.” Agnon, in the very first line of his magnificent Hebrew novel “Tmol Shilshom” ‏(“Only Yesterday”‏), wrote that his protagonist, Yitzhak Kumer, had left the country of his birth and come to the Land of Israel “to build it from its ruins and to be built by it.”

This notion of “livnot u’lehibanot”− to build and be built, as a famous song lyric goes − is central to Zionism, and to the author’s argument. Judaism is built on words, Zionism on deeds. “The cherished, traditional Jewish activities had always been studying and dwelling in the ocean of words,” Chowers writes, whereas “the new Hebrew individual was supposed to generate a world of objects.” Or as David Ben-Gurion put it: “Not by the power of literature, but by the power of intrepid people of action ... is this enchanted castle being erected.”

But buildings, as concrete entities and as metaphors, carry a troubling price, argues Chowers. The “planned construction of social reality” typically “emerges from a hierarchical political order.” Building is not a democratic activity, he writes: “Citizens as builders are not empowered as individuals but as members of a construction team.” Or as Ben-Gurion put it: “All the complaints in the name of personal freedom are simply a cover-up for anarchy, rebelliousness and irresponsibility in regard to public affairs.” ‏(Chowers cites this matter-of-factly, without calling Ben-Gurion a Bolshevik.‏)
Raw material

There is something deeply embedded in Zionism, Chowers is saying, that undercuts Israeli democracy. “An alarming instrumental language about human beings has developed in Zionist politics,” he writes. The “entire human realm is seen as raw material” in the building of the Jewish State. The problem, in his view, was exacerbated by the revival of Hebrew, which for leaders like Ben-Gurion was functional in nature, and “no longer viewed as the bearer of truth and revelation.”

What happens when the holy tongue becomes the secular language of daily life, and of war and peace in a modern state? Chowers alludes to a letter that Gershom Scholem, the modern scholar of Jewish mysticism, wrote in 1926 from Jerusalem to philosopher Franz Rosenzweig in Germany, in which he warned of the “potencies” of the “ancient names.” The letter is worth quoting more fully: “Is not the Hebrew language, which we have planted among our children, an abyss that must open up? People here do not know the meaning of what they have done. They think they have turned Hebrew into a secular language and that they have removed its apocalyptic sting, but it is not so.”

The Hebrew essayist Ahad Ha’am ‏(1858-1927‏), whom Chowers deems “the greatest thinker and writer” of the Zionist movement, did not share such misgivings. His cultural Zionism viewed Hebrew as the key to creating a modern national Jewish identity, grounded in the reunion of land and language. “By establishing a true literary center in Palestine,” wrote Ahad Ha’am, “we would marry them into a national horn of plenty, one that would overflow into all the countries of our dispersion.” Ahad Ha’am, writes Chowers, was convinced that “Judaism has a distinct spirit, a heightened moral life with a universal outlook,” which was divorced from practical politics, and that Hebrew was situated within this ethical realm. “The upshot,” argues Chowers, was that “Hebrew could hardly be brought to bear upon the emerging state institutions and, more specifically, upon the use of violence by Jews in advancing their causes.”

Haim Nahman Bialik, the revered national poet, “undermines Hebrew’s ontological and divine status altogether,” argues Chowers, calling this a “Copernican Revolution.” According to Bialik, language is not supposed to reveal truth, but rather to shield people from disturbing truths about the world − from “tohu,” the formlessness or primal chaos that lurks everywhere. When extended into the political realm, says Chowers, such shielding or concealment can be dangerous. “Does modern Hebrew,” he asks, “serve to entomb the chaos and violence involved in the implementation of Zionism, concealing existential truths that should be seen and discussed?”

The question is rhetorical. Drawing on the research of the political geographer Meron Benvenisti, Chowers describes how Arabic place names of Palestine were systematically replaced with Hebraized ones. He points out how “modern Hebrew tends to obscure the full meaning of military acts and facts.” One example is the “disengagement” from Gaza in 2005, “rather than the humiliating word ‘withdrawal.’”

For Walter Benjamin − in the words of Hannah Arendt, as quoted by Eyal Chowers − “the transmissibility of the past had been replaced by its citability.” Books too, at their best, are also “enchanted castles,” and here, the foundation stones are exquisite quotations, from Aristotle to Berl Katznelson to Toni Morrison, dozens of them worth pondering. Not every reader, academic or otherwise, will be equally persuaded by Chowers’ reasoning or conclusions. But all who make the effort will be rewarded by their journey through his stimulating book.