Empty half the Earth of its humans 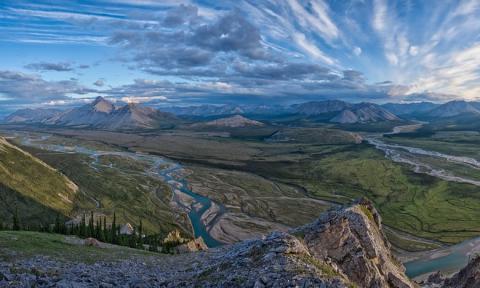 Discussing cities is like talking about the knots in a net: they’re crucial, but they’re only one part of the larger story of the net and what it’s supposed to do. It makes little sense to talk about knots in isolation when it’s the net that matters.

Cities are part of the system we’ve invented to keep people alive on Earth. People tend to like cities, and have been congregating in them ever since the invention of agriculture, 10,000 or so years ago. That’s why we call it civilisation. This origin story underlines how agriculture made cities possible, by providing enough food to feed a settled crowd on a regular basis. Cities can’t work without farms, nor without watersheds that provide their water. So as central as cities are to modern civilisation, they are only one aspect of a system.

There are nearly eight billion humans alive on the planet now, and that’s a big number: more than twice as many as were alive 50 years ago. It’s an accidental experiment with enormous stakes, as it isn’t clear that the Earth’s biosphere can supply that many people’s needs – or absorb that many wastes and poisons – on a renewable and sustainable basis over the long haul. We’ll only find out by trying it.

Right now we are not succeeding. The Global Footprint Network estimates that we use up our annual supply of renewable resources by August every year, after which we are cutting into non-renewable supplies – in effect stealing from future generations. Eating the seed corn, they used to call it. At the same time we’re pumping carbon dioxide into the atmosphere at a rate that is changing the climate in dangerous ways and will certainly damage agriculture.

This situation can’t endure for long – years, perhaps, but not decades. The future is radically unknowable: it could hold anything from an age of peaceful prosperity to a horrific mass-extinction event. The sheer breadth of possibility is disorienting and even stunning. But one thing can be said for sure: what can’t happen won’t happen. Since the current situation is unsustainable, things are certain to change.

Cities emerge from the confusion of possibilities as beacons of hope. By definition they house a lot of people on small patches of land, which makes them hugely better than suburbia. In ecological terms, suburbs are disastrous, while cities can perhaps work.

The tendency of people to move to cities, either out of desire or perceived necessity, creates a great opportunity. If we managed urbanisation properly, we could nearly remove ourselves from a considerable percentage of the the planet’s surface. That would be good for many of the threatened species we share this planet with, which in turn would be good for us, because we are completely enmeshed in Earth’s web of life.

Here I’m referring to the plan EO Wilson has named Half Earth. His book of the same title is provocative in all the best ways, and I think it has been under-discussed because the central idea seems so extreme. But since people are leaving the land anyway and streaming into cities, the Half Earth concept can help us to orient that process, and dodge the sixth great mass extinction event that we are now starting, and which will hammer humans too.

The idea is right there in the name: leave about half the Earth’s surface mostly free of humans, so wild plants and animals can live there unimpeded as they did for so long before humans arrived. Same with the oceans, by the way; about a third of our food comes from the sea, so the seas have to be healthy too.

At a time when there are far more people alive than ever before, this plan might sound strange, even impossible. But it isn’t. With people already leaving countrysides all over the world to move to the cities, big regions are emptier of humans than they were a century ago, and getting emptier still. Many villages now have populations of under a thousand, and continue to shrink as most of the young people leave. If these places were redefined (and repriced) as becoming usefully empty, there would be caretaker work for some, gamekeeper work for others, and the rest could go to the cities and get into the main swing of things.

So emptying half the Earth of its humans wouldn’t have to be imposed: it’s happening anyway. It would be more a matter of managing how we made the move, and what kind of arrangement we left behind. One important factor here would be to avoid extremes and absolutes of definition and practice, and any sense of idealistic purity. We are mongrel creatures on a mongrel planet, and we have to be flexible to survive. So these emptied landscapes should not be called wilderness. Wilderness is a good idea in certain contexts, but these emptied lands would be working landscapes, commons perhaps, where pasturage and agriculture might still have a place. All those people in cities still need to eat, and food production requires land. Even if we start growing food in vats, the feedstocks for those vats will come from the land. These mostly depopulated landscapes would be given over to new kinds of agriculture and pasturage, kinds that include habitat corridors where our fellow creatures can get around without being stopped by fences or killed by trains.

This vision is one possible format for our survival on this planet. They will have to be green cities, sure. We will have to have decarbonised transport and energy production, white roofs, gardens in every empty lot, full-capture recycling, and all the rest of the technologies of sustainability we are already developing. That includes technologies we call law and justice – the system software, so to speak. Yes, justice: robust women’s rights stabilise families and population. Income adequacy and progressive taxation keep the poorest and richest from damaging the biosphere in the ways that extreme poverty or wealth do. Peace, justice, equality and the rule of law are all necessary survival strategies.

Meanwhile, cities will always rely on landscapes much vaster than their own footprints. Agriculture will have to be made carbon neutral; indeed, it will be important to create some carbon-negative flows, drawing carbon out of the atmosphere and fixing it into the land, either permanently or temporarily; we can’t afford to be too picky about that now, because we will be safest if we can get the CO2 level in the atmosphere back down to 350 parts per million. All these working landscapes should exist alongside that so-called empty land (though really it’s only almost empty – empty of people – most of the time). Those areas will be working for us in their own way, as part of the health-giving context of any sustainable civilisation. And all the land has to be surrounded by oceans that, similarly, are left partly unfished

All this can be done. All this needs to be done if we are to make it through the emergency centuries we face and create a civilised permaculture, something we can pass along to the future generations as a good home. There is no alternative way; there is no planet B. We have only this planet, and have to fit our species into the energy flows of its biosphere. That’s our project now. That’s the meaning of life, in case you were looking for a meaning.