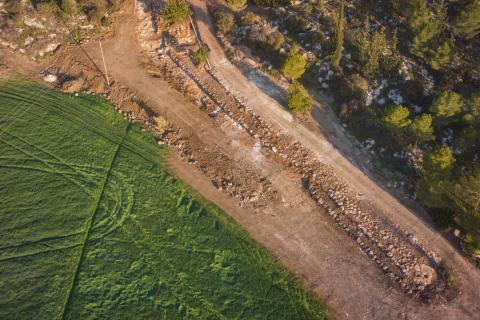 Archaeologists in Israel have uncovered yet another fantastic find from the past: this time, an impressive 2,000-year-old road dating to the Roman period.

The preserved road – stretching up to six-meters wide and continuing for a distance of approximately 1.5 kilometers – was revealed during an Israel Antiquities Authority excavation conducted prior to laying a water pipeline. “The road that we discovered, which 2,000 years ago passed along a route similar to Highway 375 today. . . was apparently meant to link the Roman settlement that existed in the vicinity of Beit Natif with the main highway known as the ‘Emperor’s Road.’ That road was in fact a main artery that connected the large settlements of Eleutheropolis (Bet Guvrin) and Jerusalem,” said Irina Zilberbod, director of the excavation on behalf of the Israel Antiquities Authority.

Zilberbod said the construction of the Emperor’s Road is thought to have taken place at the time of Emperor Hadrian’s visit to the country, circa 130 CE, or slightly thereafter. “The presence of a milestone (a stone marking distances) bearing the name of the emperor Hadrian which was discovered in the past close to the road reinforces this hypothesis,” she said. Archaeologists said coins were discovered between the pavement stones: a coin from the Great Revolt (67 CE), a coin from the Umayyad period, a coin of the prefect of Judea, Pontius Pilate, dating to 29 CE and a coin of Agrippa I from 41 CE that was minted in Jerusalem.