Eitan Stibbe getting used to life without gravity 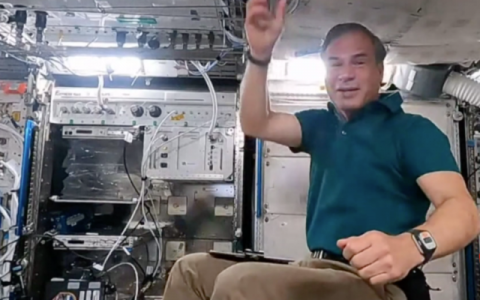 The second-ever Israeli man in space told Hebrew media on Tuesday that he has begun to acclimate to the state of non-gravity at the International Space Station. Eytan Stibbe was one of four astronauts who took off Friday on the privately-funded Rakia mission that successfully docked at the ISS the next day.

The second-ever Israeli man in space told Hebrew media on Tuesday that he has begun to acclimate to the state of non-gravity at the International Space Station. Eytan Stibbe was one of four astronauts who took off Friday on the privately-funded Rakia mission that successfully docked at the ISS the next day.

Speaking to the Ynet news site, Stibbe said he managed to get a glimpse of Israel for the first time from the ISS window. “The situation is much much better than the first day, and my brain has settled in comfortably,” he said when asked how he’s getting used to operating without gravity. Stibbe said he and his fellow astronauts are now acclimated enough to move backward and to be able to orient themselves in all directions.

Their schedule each day starts at 6:00 a.m. when all personnel at the ISS gather together at the sleeping area for a check-in. They then eat breakfast and get washed up. At 7:00 a.m. they hold a morning briefing with the 11 astronauts at the station.

They then proceed to carry out the dozens of science experiments they were sent to space in order to conduct, Stibbe told Ynet, adding that there is a great deal of camaraderie between the various astronauts.

While recognizing that there is a degree of risk upon their return to the Earth’s atmosphere, Stibbe isn’t very concerned about making the trip back. “I feel very safe, and trust the tools and equipment we have,” he told Maariv. He expressed hope that the trip back to Earth will be delayed so that he can spend more time in space.

NASA has hailed the three-way Rakia partnership with US company Axiom Space and SpaceX as a key step towards commercializing the region of space known as “Low Earth Orbit,” leaving the agency to focus on more ambitious voyages deeper into the cosmos.

Businessmen Stibbe, American Larry Connor of Ohio, and Canadian Mark Pathy have paid $55 million apiece for the rocket ride. The visitors’ tickets include access to all but the Russian portion of the space station — they’ll need permission from the three cosmonauts on board. Three Americans and a German also live up there. Stibbe, a former fighter pilot, is tasked with carrying out 35 experiments for companies and research institutions on the privately funded Rakia Mission to the orbiting lab.

While wealthy private citizens have visited the ISS before, Ax-1 is the first mission featuring an all-private crew flying a private spacecraft to the outpost. Axiom pays SpaceX for transportation, and NASA also charges Axiom for use of the ISS. On Saturday, Stibbe and his three fellow passengers on board the SpaceX Dragon capsule communicated with the control room on Earth, with the Israeli businessman speaking Hebrew.

“Hello everybody,” Stibbe said in Hebrew. “We’ve gotten used to the lack of gravity by now and have started to feel more comfortable.” “I have another indicator of the lack of gravity,” he said, while letting go of a toy in the shape of an octopus given to him by his granddaughter before his departure. “The launch was amazing,” he said. “We’re currently over Africa and in about 15 minutes we will fly over Israel’s shorelines.”

The first-ever Israeli astronaut, Ilan Ramon, was killed in 2003 when the Space Shuttle Columbia disintegrated upon re-entry into the atmosphere, killing all seven crew members on board. Members of the Ramon family were on hand when Stibbe’s flight was first announced in 2020, and were also present at the take-off in Orlando on Friday.

Stibbe plans to pay tribute to Ramon during the mission. He is carrying surviving pages from Ramon’s space diary, as well as mementos from his children. Unlike the recent, attention-grabbing suborbital flights carried out by Blue Origin and Virgin Galactic, Axiom says its mission shouldn’t be considered tourism due to its scientific goals.