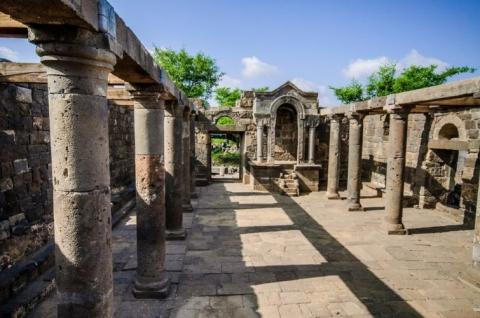 The Byzantine-era synagogue and adjoining spring at Ein Keshatot, known in Arabic as Umm el-Kanatir(the Mother of Arches) – one of the most important Jewish historic sites in the Golan Heights – was rededicated Monday by Prime Minister Benjamin Netanyahu following a 15-year reconstruction.

The Byzantine-era synagogue and adjoining spring at Ein Keshatot, known in Arabic as Umm el-Kanatir(the Mother of Arches) – one of the most important Jewish historic sites in the Golan Heights – was rededicated Monday by Prime Minister Benjamin Netanyahu following a 15-year reconstruction.

The synagogue, with its ornately carved basalt Torah ark, was built in the 1st century but extensively renovated some 500 years later. The building, which collapsed in the catastrophic earthquake of 749 CE, measured 18 meters long by 13 meters wide, and is calculated to have been 12 meters high. That impressive size made it one of the biggest of the 30 ancient synagogues discovered in the Golan Heights.

Several factors indicate the wealth of this Jewish village during the Byzantine era. The springs supported a flax and textile industry, while the twin olive presses produced oil for export. The villagers’ wealth was displayed in their elaborate synagogue.

The Ein Keshatot (Spring of the Arches) synagogue was first documented in 1884 by Laurence Oliphant and Gottlieb Schumacher. Deir Aziz was the name of the Arab village built atop the ruins of the Talmudic era settlement. The ancient town’s original Jewish name is unknown.

The NIS 30 million restoration began in 2003. Engineer Yehoshua (Yeshu) Dray and archaeologist Chaim Ben-David of the Kinneret Academic College and Bar-Ilan University used 3D scanning technology to record and then put back the stones in their original position lifting them with a makeshift crane. Recently, the Golan Regional Council upgraded the access road to the site.

While the building collapsed in the earthquake of 749, Dray and Ben-David were surprised to discover the stone ark was left intact. It’s carved with a menorah, lulav and etrog, and geometric designs. Unlike others synagogues in the Golan which have an opening on the south oriented to Jerusalem, the door to the Umm el-Kanatir synagogue is set in the east wall. The opening is slightly asymmetric, and researchers assume the door was placed off-center to highlight the ark.

Among the archaeological findings were a cache of bronze and gold coins secreted under the synagogue’s stone floor. Archaeologists used those coins to determine the synagogue was built during the reign of Justinian I, who ruled the Eastern Roman empire from 527 to 565 CE.

Close to the Ein Keshatot synagogue, a spring flows year round into three basins. Used nowadays by tourists for a refreshing dip, in antiquity these pools were the source of the village’s fresh water and were used in the textile industry. The large rectangular Deir Aziz pool located next to Moshav Kanaf was built in memory of Ashi Novik, a moshavnik killed during the Second Lebanon War. The site is well maintained, with orchard trees and seating spread over a large area, and offers a recreation venue for families who come to picnic and relax.

SPEAKING at the dedication ceremony, Netanyahu exclaimed, “It is a holiday in the Golan. We are celebrating the finished reconstruction of Ein Keshatot. I can picture the people living during the time of the synagogue, the families living in the surrounding villages and coming to the synagogue to pray.” The PM hailed Dray and Ben-David, saying “The creativity of how they took the stones and solved the mystery through 3D imaging technology is incredible.”

Netanyahu added he hoped that the restored synagogue will become a popular site for bnai mitzvah celebrations, solidifying the Jewish presence in the Golan, and bringing more tourists to the area. “Israel in the Golan is a fact. The international communities must recognize this,” he said. “I remember a time when our enemies used to stand on the cliffs in the Golan and would shoot at us. This is over and never coming back.

“The Golan will always remain under Israeli sovereignty, because otherwise we will accept Iran and Hezbollah on the shores of Lake Kinneret,” Netanyahu noted, referencing the statement made by the late Syrian dictator Hafez al-Assad to then-US president Bill Clinton that he used to swim in the Sea of Galilee before Israel captured the Golan Heights in 1967.

“As proven many times, the strength of the Israeli and Jewish people is strong, and it always enables us to get back up. You can even see it today [with the reconstruction of the once destroyed synagogue],” said Netanyahu.