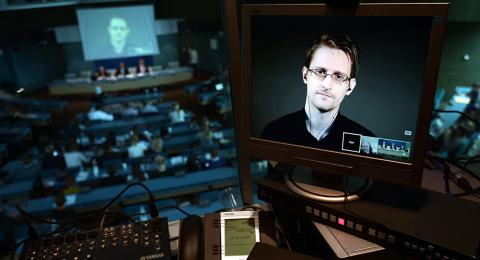 Edward Snowden, the infamous “whistleblower” who leaked classified NSA information in 2013, will speak via video conference to an Israeli audience at a closed event on November 6, according to a statement released on Wednesday. Snowden will speak on Israel-related issues from his secret hideaway in Russia at an event organized by the Israeli media consultancy firm OH! Orenstein Hoshen.

Though he will not be physically present, due to concerns that he might be handed over to US authorities, he is expected to take questions from the audience. Former deputy chief of the Mossad Ram Ben-Barak will respond to Snowden’s remarks. Hedan Orenstein and Itamar Hoshen said, “Our firm is engaged in advising clients… in the realm of economics, law, technology and high-tech – and these are exactly the fields in which Snowden is involved. Snowden is a fascinating figure because his actions are so controversial. The audience will hear… can ask tough questions and people can work out their own opinions.”

Snowden was working for a private contractor of the CIA and NSA when he made international headlines by publishing masses of classified information in the biggest and most sensitive leak in the history of intelligence.

The leak unveiled for the first time the existence of post-9/11 powerful and invasive global surveillance programs, many run by the NSA, with the cooperation of European governments and telecommunication companies, including Google, Microsoft and Verizon. Some of the programs were discontinued, while others were continued but with higher levels of regulation.

In February 2015, a classified document leaked by Snowden revealed information about the cooperative intelligence-gathering efforts of the US, UK and Israel against Iranian targets. Other previous Snowden documents revealed a number of details of the inner workings of the intelligence relationships between the US and Israel and with the other members of the “Five Eyes” in general, which also includes Australia, Canada, New Zealand and England.

Those previous leaks, mostly in 2013, related to the NSA eavesdropping on some top Israeli officials and possible Israeli cooperation with the NSA to eavesdrop on other mutual allies of the two countries. Another revelation indicated that the NSA may have greater authority to check communications with US citizens living in foreign countries, such as Israel, while yet another revealed that the US may sometimes cooperate with Unit 8200 to review metadata on behalf of the NSA that the NSA itself cannot review under US law.

Snowden remains one of the world’s most wanted fugitives. He could face life in prison or even the death penalty if he is ever captured. He is both vilified as a traitor and revered as the whistle-blower who altered the playing field on the issue, putting the NSA on the defensive.