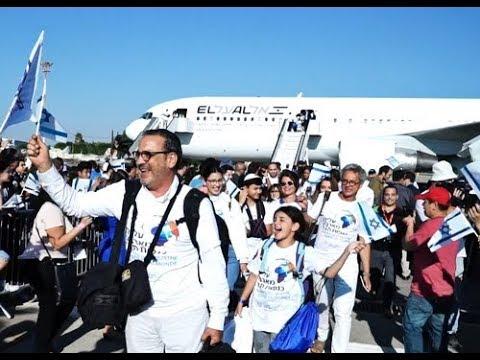 Today marks Immigrant Day in the education system. On dealing with the issue of immigration to Eretz Yisrael, which is almost nonexistent, Arutz Sheva spoke to Torah MiTzion CEO Zeev Schwartz, whose dozens of emissaries are scattered in Jewish communities around the world.

Immigrant Day is set for the Torah portion of Lech Lecha, for Avraham our Father the first immigrant. Schwartz states that initially it was intended to set the day on the tenth of Nissan, the date when the Israelites entered the Land of Israel, but it was decided on the seventh of Cheshvan when prayers begin for rain, and for Schwartz it is an appropriate date as it expresses the identification of the residents of the Land of Israel with those in the Diaspora communities, as prayers for rain were deferred until the last returning pilgrims arrived home in Babylon.

In his remarks, Schwartz emphasized the importance of being aware of how immigrants are absorbed in Israel as part of the concept of recognizing others and accepting them. "What is an immigrant? An immigrant is different. He comes to Israel and there's still a difference, and the question is whether the education system can accept the difference. A person comes without the language, without friends, and the education system must accept the difference with all the necessary sensitivity."

Schwartz notes that the number of immigrants to Israel currently stands at some 30,000 each year, twenty thousand of whom come from the former Soviet Union and another ten thousand from all the Western countries, a relatively small number that needs to increase.

"The immigrant has a stigma; there's a different accent that comes from home, there's always something different. The immigrant pays a high price and asks how much society is willing to open its heart and soul for an Oleh," he says, noting that not only the education system should be concerned about the immigrant, but also society and the neighborhood, one can connect with a new immigrant family that just arrived, give preference to immigrant employment, invite Olim to join you on a family outing, and more.

He says the meaning of an immigrant who returns to his country should be understood if his absorption was unsuccessful. It reflects on the community as proof that Israel is unable to absorb immigration, that the bureaucracy doesn't help, and that there is no patience for immigrants in Israel, and this deters other potential immigrants. "Everyone's excited to see El Al planes with the immigrants, but it requires us to enlist, each in his own way and in his own place."

And maybe, we asked Ze'ev Schwartz, all the discourse on immigration remains within religious Zionism while the rest of the people don't see it as an ideal or goal mainly because life abroad does not seem so terrible, and the world is already a global village where even those living in Europe or the U.S. don't really break away from their families for many years and so it doesn't look so bad.

"Although we're in a global village, and at first glance what would happen if someone went to Europe for a few years, but there there's great danger to every Jew everywhere. The emigrating Israeli is one of the most at risk. The emigrating Israeli isn't willing to pay the price for Jewish education and therefore sends the children to public school, where the children sit next to Korean, Japanese, American, or other immigrants and thus the Jewish population is exposed to assimilation, so it is terrible and we mustn't say it's not so terrible to leave the country for a few years, even a fellow who goes to medical studies for a few years in Europe, who's he going to fall in love with? With a student from Moldova, Japan, or another country."

And regarding this, we asked Schwartz if he didn't feel the atmosphere in Israel does not see the issue of assimilation as so terrible. We mentioned the positive reception currently enjoyed by a young Israeli on Channel 11 News who went on a trip to China, stayed there, married a Chinese woman and now teaches children and feels he is contributing to the world and to China.

"It's a painful question," says Schwartz. "In Israeli society, there are those who see this act as repairing the world, going to villages to help in China or Africa and where they fall in love. It hurts. It is a disaster and we have a serious problem. Not everyone is aware of the problem of assimilation. In the Orthodox community, the prospect of staying Jewish is also great for those who don't immigrate to Israel, But in other communities the problem is serious. There are groups called 'unidentified' who increase the danger of assimilation. We make efforts to tell young people that you can travel but return home. Those who go there are exposed to assimilation and their children will be gentiles.

"A few years ago I visited a community in Scandinavia and was shocked when emissaries there told me about a girl who looks Yemeni and speaks Hebrew as a mother tongue. She is not Jewish. The father fell in love and got married but the children aren't Jewish," says Schwartz, emphasizing the importance of reaching out to communities with emissaries who model and connect Jewish communities to Judaism and Zionism.

And back to the way the Israelis are absorbing the immigrants: "Many Diaspora Jews live well, they lack nothing; they have no eiruv, no kashrut, no synagogue, and they don't feel lacking. If they come here anyway it is because they sacrifice and give up a lot and on our part there should be a national effort for absorption, sending messengers to look for them in the small communities and expose them to Judaism and Zionism. When you see an immigrant you've got to salute him. He didn't have to come here."