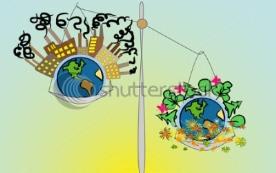 A new OECD report paints a bleak future for our environmental future, unless we cut our rampant consumption of the planet's resources.

Environmental Protection Minister Gilad Erdan is in Paris to address other government ministers on Thursday about "Making Green Growth Deliver." The Organization for Economic Cooperation and Development convened the meeting following the publication of its damning "Environmental Outlook to 2050" report, analyzing the planet's long-term situation. The members of the OECD are, of course, the main consumers and major polluters of the earth's natural resources. The OECD report attempts to predict a baseline scenario - the environmental situation in 2050 in the absence of major changes in current patterns of economic and population growth. It estimates the financial, and other, costs of the failure to take steps in the face of increased damage to natural resources, and suggests appropriate action.

The baseline scenario for the next four decades is a gloomy one for the planet and its inhabitants. Economic activity is expected to increase by 400 percent, while energy demand will rise 80 percent; most of the latter will be met by fuels that increase pollution and quicken climate change. If no steps are taken to prevent climate change, it is estimated that the cost of the damage will be equivalent to 14 percent of the average world consumption per capita.

Biological diversity will continue to decline in the wake of increased consumption of resources such as forests and arable land. Some 13 percent of primordial forest will be lost, and with it the richest centers of such diversity. The cost of inaction against this trend is estimated as high as $5 trillion per year. This will be due to the loss of tourism and the vital services provided by plants and animals that are the source of food, climate control, raw materials for medicines and aid in the natural decomposition of pollutants.

The most serious health problem connected to environmental pollution will be the doubling of deaths from the rise in air pollution due to the burning of fossil fuels for heat and transportation. This is expected to reach 3.6 million deaths annually, mostly in the developing world, posing an even greater problem than that caused by impure drinking water. The water shortage will worsen, with close to 40 percent of the earth's inhabitants living in areas suffering from a severe lack of the resource.

The OECD report also reviews its actions in recent years to protect citizens from environmental pollution and to make more effective use of resources. But the rate of population and economic growth is such that pressure on the environment has not been reduced.

Proof of this may be found in statistics published this month by the European Union's Environment Agency. European citizens consume more than four times the resources used by Africans. EU consumption per capita has risen more than 10 percent over the past decade. Another interesting figure is that Europeans have increased their living space by 10 percent over the last 20 years, while the average number of persons in each household has declined from 2.8 to 2.4.

In order to have an effect on what is essentially a horrific baseline scenario, the OECD recommends the use of an abundance of policy tools. "If the baseline scenario is not changed, the continued erosion of natural resources is to be expected over the coming decades and after," the report notes. "What this means is the risk of irreversible changes threatening everything that has been achieved in two centuries of improvements in the quality of life worldwide."

The problem is that the OECD's recommendations on policy are based on the same type of environmental-economic thinking that is deemed acceptable in member nations. They mostly depend on more efficient use of economic means or the introduction of additional technological means to reduce pollution.

Among the suggestions is the cancellation of subsidies that encourage consumption of polluting fuels, and increased fines on industrial polluters. It is also recommended to support research and development of clean technologies, and to charge high prices for the exploitation of ecosystems.

These suggestions are of great importance and are a necessary means of dealing with environmental problems. But in the long run, more significant changes are required. The first is a broader use of family planning policy, including distribution of contraceptives and improving women's education in order to check the pace of population growth.

In addition, a real change in the culture of consumption among rich countries is required, in order to instill these practices in the mushrooming economies of China, India and Brazil, which are following in their path. This change includes the development of biodegradable products, the introduction of recycling and the imposition of severe limitations on the production of poisonous materials.

No less important is the development of a new ethos about development and growth, one which is not based on the consumption of more and more possessions and gadgets, but instead on the creation of social welfare, a clean environment, the strengthening of communal life and culture, and also the creation of a new relationship to nature - one that is not based on unending exploitation but rather on restraint. This is not a matter of postindustrial environmental utopia, but of an industrialized society that learns to coexist with the environment.