The earth is flat, but the Jews hide the truth 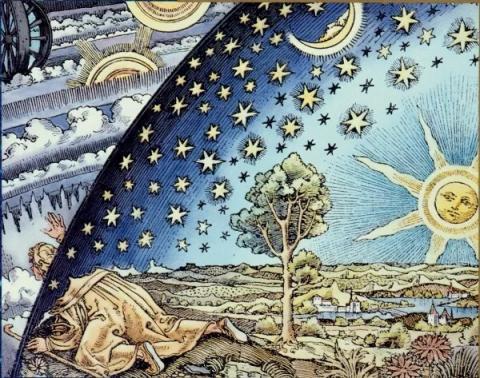 When U.S. journalist Kelly Weill was monitoring alt-right communities online for her job at The Daily Beast in 2017, she was surprised to find significant interest in the theory that the Earth is flat. “I didn’t think it was serious – I thought they must have been joking, that it was some kind of meme,” Weill recalls in an interview. “How on earth could people actually believe it?”

Yet despite ample scientific evidence to the contrary, there remains a sizable amount of support for the Flat Earth theory – as well as a strong belief that there’s a conspiracy afoot to prevent people discovering the truth about our planet’s shape.

Weill, 28, has been studying the phenomenon ever since. It led her down a digital rabbit hole into conspiracy theories in general, including with regard to antisemitism ­– a source of discomfort for Weill, whose father is Jewish.

And now she’s written a fascinating book about her journey: “Off the Edge: Flat Earthers, Conspiracy Culture, and Why People Will Believe Anything,” published by Algonquin Books. “It doesn’t mean there are no actual conspiracies – there are,” Weill points out. “But there’s also a proliferation of completely bizarre theories, like Flat Earth.”

One of the few things everyone on the planet can probably agree on right now is that, thanks to the internet and social media, there are more conspiracy theories than ever before – and they traverse the world quickly. Much of Weill’s reporting for The Daily Beast since 2016, including the recent headline “New QAnon conspiracy involves a magical bed for zombie JFK,” only confirms that.

The Rochester, NY, native says she is currently noticing several conspiracy theories relating to the 2-month-old Russia-Ukraine conflict. “There’s a very popular one right now that accuses Ukraine of developing bioweapons,” she says. “That theory is drawn upon familiar conspiracy-theory language around COVID – that the U.S. Centers for Disease Control and Prevention is not telling the truth, that sort of thing.”

Asked which conspiracy theories trouble her the most, she cites the “very worrying conspiracy theories about the 2020 election, used as the basis to discredit future elections – to basically promote political violence and also disenfranchise certain minority communities in the United States. I think those theories are the most worrying, even if they’re not as wacky as Flat Earth.”

The Flat Earth movement dates back to 1838 and a young English utopian socialist named Samuel Rowbotham. He used both a misreading of the Bible and flimsy scientific experiments to posit his theory that “the Earth was flat,” Weill explains, “floating on some vast, dark ocean. … He would cherry-pick Bible readings, things that inferred flatness and appeared to discredit Earth as a circle. These were very subjective lines that I think he warped to suit his emerging model of the world.”

It was not the best of times to be a Flat Earther, given the space race between the Americans and the Russians, and Shenton received a jolt when Neil Armstrong became the first person to set foot on the Moon in July 1969.

It took a while, but the Flat Earth community eventually rejected the imagery NASA was bringing to the world. “Once they determined that they still believed the Earth was flat, they found excuses,” Weill says. “If you talk to a Flat Earther about outer space, they say there is no outer space; everything is contained within a little flat plane with a dome atop it.”

For them, photos of the Earth from outer space are simply evidence of a cover-up. “If people are motivated enough to believe something, they will find the reasons they need, evidence to the contrary,” she says. Today, she adds, “we can very safely assume the movement is larger than certainly at the time of the Moon landing.”

Social media is playing a key role in the movement’s growth, with hundreds of thousands of people belonging to Flat Earther groups on Facebook. “I think social media has really catapulted conspiracy theories like Flat Earth,” Weill sighs. “On sites like YouTube, there are algorithms promoting content and websites they think people will click on. Often, what people click on is sensationalized, curiosity-provoking. A lot of conspiracy theories, including Flat Earth, flourish under that discovery.”

As her research continued, Weill swapped the dark recesses of Facebook for the dark recesses of hotel conference rooms, where Flat Earth gatherings could draw crowds of up to 600 people. She always identified herself as a journalist and what the attendees would call a “Globe Earther” – someone who believes the Earth is round.

“It’s a very weird experience suddenly being one of the ‘Globe Earth’ supporters,” she recounts. “I felt a little more sympathy for Flat Earthers, how they usually feel like the odd one out.” However, she adds, “it’s for good reason they feel that way.”

People did try to change her mind and “give the elevator pitch for Flat Earth,” she says. “After that initial speed bump in our conversation, people were much more interested in talking about the human elements of their belief: things that had gone wrong for them after getting into Flat Earth; alienating their friends by being in the conspiracy community. These were very human conversations.”

Yet Weill found disquieting evidence of support for other kinds of conspiracy theories during her research. “I started seeing far-right and antisemitic tropes emerge in Flat Earth,” she says, adding that “the tropes being reflected are actually quite old.”

In the book, she relates visiting the merchandise room at a Flat Earth conference and chatting to one of the vendors about the supposed “cover-up”: “I asked her, ‘Who was bothering to conceal the shape of the Earth?’ ‘The CIA, the FBI,’ she told me. ‘The Jews are involved too.’” Making her excuses, Weill moved on to the next table and started flicking through a book called “The Greatest Lie on Earth: Proof That Our World is Not a Moving Globe.”

“All of a sudden, I see it citing ‘The Protocols of the Elders of Zion’ as if it were a real text, not a forgery,” she says. “Not being a person of faith but having some Jewish heritage, I’m aware of antisemitism – I expect it sometimes writing about the alt-right with a Jewish last name. … In the conspiracy world, any association with Judaism is viewed as suspect.”

She notes, though, that whenever she encountered antisemitism among Flat Earthers, there were some who did “not necessarily know they were invoking it.” And, she says of the movement, “I’ve never had anybody be antisemitic to my face.”

In some cases, she was even able to make connections with members of the Flat Earth community. For instance, for two years she corresponded with a man named Mike Hughes, who was working on a self-manned rocket launch into the Earth’s upper atmosphere in order to ascertain its shape for himself. Tragically, he died during a rocket launch in February 2020.

“For several years he was one of the most visible faces of the Flat Earth movement,” Weill says. “I think he was a nice guy. When he died in the rocket crash, I was very upset. I think some part of me assumed he would not actually take this step. Of course, he did.”

Following Hughes’ death, his publicist claimed the launch was just an attention-getting stunt capitalizing on the Flat Earth phenomenon. His ex-wife and friends said otherwise. “My takeaway is that so much of his life was advocating for this theory. Even if he was privately skeptical, he really devoted so much of his life’s work to this one talking point,” Weill says.

He was not alone. Skeptics have been speculating about the shape of the Earth for almost 200 years and, as Weill notes in her book, “Flat Earthers comprise a spectrum of people who are seldom much different, or any dumber, than the rest of us.”

The author says people tell her that “Off the Edge” helps them “understand conspiracy theorists in their lives. Maybe it makes more sense exactly why the world feels so strange at this moment.”