Dress Culture in the Young State of Israel 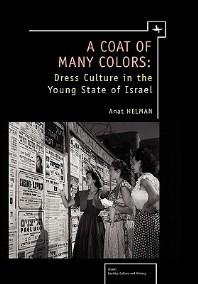 Anat Helman sorts through Israel’s clothing racks, showing how a fledging state develops a sense of style, and builds the foundations of a fashion industry.

By Anat Helman
A Coat of Many Colors: Dress Culture in the Young State of Israel
Academic Studies Press, 300 pages.

In photographs from Israel’s first decade of statehood, it often seems like everyone is wearing the same outfit. Someone looking at those photos might be lulled into thinking that there can’t be much to say about the omnipresent grayish-khaki worn by military guards and factory workers from Tel Aviv to the Jezreel Valley. But the photos are misleading, perhaps the result of the black-and-white printing process. Or maybe the photos accentuate the ethos upon which generations were raised: Here we are, building state and society, and we have no time for trivial things like collar styles, sleeve lengths and whether or not pants are cuffed. Makeup, dress patterns and hairstyles, the thinking went, are unimportant in a place where people toil and stand guard, drying out swamps and making the desert bloom.

Since clothing is a universal cultural artifact ‏(everyone’s been wearing it for thousands of years‏), it is fascinating to examine what a specific community wore at a specific time, and what clothes, jewelry, shoes, accessories, makeup and hair styles say about that community. What do those sartorial decisions mean, and why? How are clothing and fashion in any one society during any given period influenced by ideological, economic and cultural factors? And how does the fashion of a particular period influence the culture of that time? In fluent, jargon-free prose, Helman gives succinct explanations, replete with examples, in an attempt to air out the young country’s closet; she analyzes how particular clothing has shaped different identities − private and public, real and imagined.

Helman offers several observations right from the start, the most important one being the distinction between clothing and fashion. While clothes “mark the general technical and wide-ranging aspect of the need to cover the body, fashion is linked to social norms as well as aesthetics and style.” Furthermore, as nearly every teenager knows, “a swift and constant change in style is fashion’s key principle, and may be distinguished from other clothing patterns.”

Helman suggests “two dominant models” of clothing in Israel’s first decade as a state. She calls the grayish-khaki look of the state’s early days the “austere model.” She argues that while it is difficult to decide which style was most prevalent in that era, one can say that on some level this simple style won out because it was identified with native-born Israelis, the successors of the pioneers. It was an “anti-fashion expressing the official hegemonic values of simplicity, equality, work and settling the land,” she writes. Yes, the studied negligence of khaki clothes, biblical sandals and the iconic kibbutz hat, topped off with a kaffiyeh around the neck, comprised what was basically a uniform.

Helman splits up the “austere model” into several subcategories, each with its own variations and each awarded its own chapter: work clothes, army uniforms, kibbutz wear ‏(different types of outfits for workdays and for Shabbat‏), and clothing produced and supplied during times of rationing.

But Helman makes it clear that while the leadership of the country attempted to instill a taste for modesty and restraint in the name of shared nationalism, and despite the dominance of the simple, worker-style model, a second paradigm reigned when it came to social and cultural life: “the revisionist ‘new Jew,’ who was characterized by ‘elegance’ and applied [the principles of] Western urban fashion.” This model eventually won out − if not in this early period, then certainly afterward. The simple, ascetic, pioneer-worker model of dress has virtually disappeared, just as the deliberately ascetic mentality it signified is obsolescent in Israeli politics and culture. The Western model, fruit of the urban bourgeoisie and the desire to express individuality, creativity and dynamism, won by a landslide.

Like an animal in danger of extinction, the austere model has been preserved in factories, scout groups and, of course, in the army. But it is no longer used as a means of self-expression in the public arena.

The book’s main weakness is the absence of color photos; this is a book about fashion, after all. All the same, Helman does a good job of showing the reader some of the rich range of materials on which she based her research: photos ‏(in black and white‏), newspaper and magazine articles ‏(“Is There Men’s Fashion in Israel?” asks a headline in the illustrated men’s magazine Lagever in the winter of 1954, the same year that the film journal Kolnoa features a column called “Beauty, My Primary Concern”‏), and an abundance of visual materials such as posters, postcards and advertisements that seem naive at first glance. But advertisements are never naive. Then as now they were attentive to the whispers in the young Israeli marketplace, and channeled as well as determined taste.

The book’s final chapter is a discussion of the beginnings of Israeli fashion after statehood, and the attempt to design, create and disseminate some sort of national clothing. Lola Beer, the most important designer of this early period, declared that Israel had no original fashions, and that “it would take 500 years to create national Israeli clothing.” Nonetheless, local industry began to produce − and even export − clothing that combined various textiles, effectively meshing East and West together, as best represented by the clothes made by the loose clothes decorated with Yemenite-style embroidery produced by Israeli clothing manufacturer Maskit.

And then jeans and T-shirts became the norm, and shopping malls brought Israelis the same clothes available throughout the Western world. But that’s the start of a different story, about a different Israel.