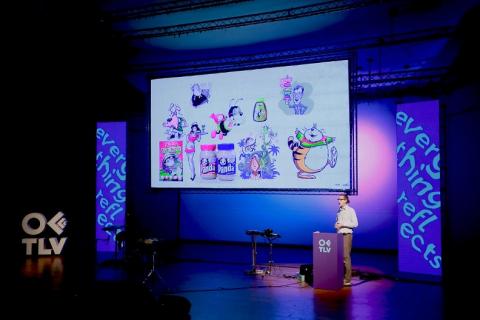 Tel Aviv is gearing up for the second annual OFFF TLV event, a design festival that celebrates local and international talent in the art world. The festival began in Barcelona 18 years ago and has been held in the Spanish city every year since. Tel Aviv held its first OFFF festival last year, touting Israeli multi-disciplined and creative designers who “break boundaries,” co-founder Liri Argov tells NoCamels.

Argov, a graphic designer and branding design strategist, helped bring the conference to Israel alongside Nitsan Rozenberg, another Tel Aviv-based designer, and a friend from the Holon Institute of Technology where they both studied. The two collaborated on the creation of design-oriented messages for the Israeli social justice demonstrations in the summer of 2011, that led to thousands protesting socio-economic standards and the high cost of living in Israel. After the protests dwindled, the pair began to look for new inspiration, eventually deciding they would ask the “biggest graphic design festival in the world” if they would bring the event to Israel to showcase fresh, local talent.

The conference became an innovative way to connect the local design community with an international audience, Argov tells NoCamels. This year’s festival will take place at the Tel Aviv Museum of Art on October 14 and 15, and Argov says tickets are sold out. “There is a waiting list,” she says.

Argov, a graphic designer and branding design strategist, says that while a thousand tickets have been sold, she expects as many as 4,000 people under the same roof, welcoming the vibrant atmosphere.

There is a thirst from all over the world to see what is going on in the design community in Israel,” she says. “We have people coming from the US, Russia, Portugal, Australia.” “What I like most about the festival is that it’s really loose — beer, an outdoor zone, people watching the talks on a big screen. The event is really about having fun, with 90 percent of the audience coming from all over the world.”

The event will include an OFFF yard with various pop-up shops from selected designers and a large space in the museum garden where participants can gather, snack, and watch speakers on a large television set.

Marina Willer, the first female partner at Pentagram, the world’s largest independently-owned design studio is part of the all-star line up as is Grant Lau of Imaginary Forces. The company, where she is currently art director, has revolutionized the opening titles of films and television series and is responsible for the design of opening titles for hit TV series like Mad Men and Stranger Things.

“The goal of the festival is to unite all disciplines across all industries, so our main goal when we decide on the lineup is to invite a mix of well-known designers at cutting-edge studios as well as undiscovered designers creating new material,” Rozenberg, a designer who now has his own business, Studio&more, told curated design conference site Neon Moire. “OFFF TLV is all about mixing all fields of design and learning from other disciplines than yours so we are very careful to accommodate the variety of fields that exist in visual design so there’s something for everyone.”

Setting aside the great restaurants and lush beaches, Argov says international designers have been attracted to Tel Aviv because of its strong ties to tech and startups as well as the way Israelis approach innovation in design. “Startups in Israel are always thinking of new ways to approach tech and we bring that with our design and branding. People in Israel are creative and tackle challenges,” she says, “We are always pushing boundaries and we bring that element to tech.”

“I am a designer and [in co-founding this event] suddenly I’m an entrepreneur. The two worlds are combined,” Argov continues, connecting the uniqueness of the Israeli design community to the multidisciplinary nature of Israelis. “We are a design community of many disciplines,” Argov says, “I have many friends that study broad topics, like branding, sound design, graphic design, illustration. You won’t get a lot of work if you do just one. We are designed to think about many solutions. No one will tell you can’t do it.”

She also says that Israel’s influence on startups and tech around the world is what sparked a lot of international interest for the event. “I know that people from the international OFFF team checked the DLD Tel Aviv Innovation Festival when they were first interested in coming here,” she says, referring to the popular global conference established in Israel by veteran entrepreneur Yossi Vardi. “They made a connection there.”

Argov says the philosophy of Israel’s local designers is that “you can learn from everyone. One of the most important things I’ve learned while being part of the design community in Israel is that inspiration comes from every niche.”

To learn more about what’s going on at OFFF Tel Aviv, check out the festival’s official Tel Aviv website.