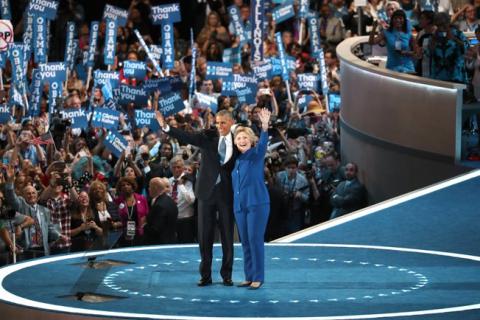 President Obama and Hillary Clinton at the Democratic National Convention on Wednesday. Credit Sam Hodgson for The New York Times.

Wednesday was a night of inversion and transition for the Democratic Party. President Obama and Vice President Joseph R. Biden Jr. gave what were likely to be the final widely viewed political speeches of their administration, seeking to defend their record, denigrate Donald J. Trump’s and persuade voters that Hillary Clinton is a worthy successor. And Democrats sought to seize on the traditional core of Republican campaign messaging: America as a place of virtue, optimism and exceptionalism. Our takeaways:

America first — in the world

In seeking to capture his ideals, Mr. Trump has embraced the slogan “America First.” An echo of Charles Lindbergh and Pat Buchanan, the phrase evokes an old-fashioned American nationalism — tinged with nativism, a suspicion of outsiders and a retreat from foreign entanglements. The third night of Mrs. Clinton’s Democratic National Convention, heavy on national security themes, could have been titled “America First in the World.” Democrats celebrated the country’s diversity, with Senator Tim Kaine of Virginia, the vice-presidential nominee, ladling on the Spanish. Prominent Democratic hawks, including Leon Panetta, a former C.I.A. director and secretary of defense, made the case for internationalism and multilateral engagement, harking back to the Cold War tradition.

The past is prologue

The Republican primary contest was not just tough. It was a battle for the soul of the party, fought to the bitter end, by opponents who feared that Mr. Trump would rupture their movement and betray their ideals. On Wednesday, Mrs. Clinton’s campaign harvested those angry months for a montage of criticism: a video of attacks on Mr. Trump during the primaries from respected Republican leaders — including Mitt Romney, the party’s nominee in 2012, and Senator Lindsey Graham of South Carolina — describing Mr. Trump as dangerous and unprepared to deal with world affairs. Expect to see more of these clips in the fall.

Are Republican voters in play? Democrats think so

Along with the videos of Republicans, there were paeans to faith and to the strength of the United States military, contrasting Mr. Trump’s remarks about the military’s decline. There was a full-throated endorsement of Mrs. Clinton by former Mayor Michael R. Bloomberg of New York, once a Republican and now an independent, who emphasized his disagreements with the Democrats on education and spending issues. And there was Mr. Obama himself, an unpopular figure in Republican circles, seeking to undermine Mr. Trump’s partisan credibility. “What we heard in Cleveland last week wasn’t particularly Republican — and it sure wasn’t conservative,” Mr. Obama told a prime-time television audience. Those moments suggested that Mrs. Clinton believes Mr. Trump is toxic or unconventional enough for her to peel off a significant slice of Republican voters.

Democrats are not merely going to paint Mr. Trump as extreme and unprepared, offensive and immature, a cheat and a fraud. They are going to attack him — carefully, and maybe indirectly — as mentally unfit. For Mr. Obama and other speakers, the idea was expressed in conventional form, as a concern about “temperament.” But it was Mr. Bloomberg, a billionaire known for directness and limitless self-confidence, who went on Wednesday where no Democrat did: He said Mr. Trump lacked the mental fitness for office. “Let’s elect a sane, competent person,” Mr. Bloomberg told the audience. It’s going to be one heck of a summer.