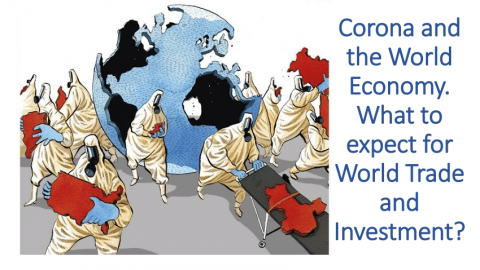 Even if the United States turns a blind eye to deglobalization’s effects on the rest of the world, it should remember that the current abundant demand for dollar assets depends heavily on the vast trade and financial system that some American politicians aim to shrink. If deglobalization goes too far, no country will be spared.

The post-pandemic world economy seems likely to be a far less globalized economy, with political leaders and publics rejecting openness in a manner unlike anything seen since the tariff wars and competitive devaluations of the 1930s. And the byproduct will be not just slower growth, but a significant fall in national incomes for all but perhaps the largest and most diversified economies.

In his prescient 2001 book The End of Globalization, the Princeton economic historian Harold James showed how an earlier era of global economic and financial integration collapsed under the pressures of unexpected events during the Great Depression of the 1930s, culminating in World War II. Today, the COVID-19 pandemic appears to be accelerating another withdrawal from globalization.

The current retreat began with Donald Trump’s victory in the 2016 US presidential election, which led to tariff wars between the United States and China. The pandemic will likely have an even larger negative long-term impact on trade, partly because governments increasingly recognize that they need to regard public-health capacity as a national-security imperative.1

The risk today of a debilitating 1930s-style overshoot in deglobalization is massive, particularly if the US-China relationship continues to fray. And it is folly to think that a chaotic, crisis-driven retreat from globalization will not introduce more – and vastly more serious – problems.

Even the US, with its highly diversified economy, world-leading technology, and strong natural-resource base, could suffer a significant decline in real GDP as a result of deglobalization. For smaller economies and developing countries that are unable to reach critical mass in many sectors and often lack natural resources, a breakdown in trade would reverse many decades of growth. And that is before considering the long-lasting impact of social-distancing and quarantine measures.

The late economist Alberto Alesina, a towering figure in the field of political economy, argued that for a well-governed country in the age of globalization, small can be beautiful. But today, small countries that lack a close economic alliance with a large state or union face huge economic risks.

True, globalization has fueled economic inequalities among the approximately one billion people who live in advanced economies. Trade competition has hammered low-wage workers in some sectors, even while making goods less expensive for everyone. Financial globalization has arguably had an even larger effect by increasing the profits of multinational corporations and offering new high-return foreign-investment instruments for the wealthy, especially since 1980.

In his 2014 bestseller Capital in the Twenty-First Century, Thomas Piketty cited rising income and wealth inequalities as evidence that capitalism has failed. But whom has it failed? Outside of the advanced economies – where 86% of the world’s population lives – global capitalism has lifted billions of people out of desperate poverty. Surely, therefore, an overshoot in deglobalization risks hurting far more people than it helps.1

To be sure, the current model of globalization needs adjusting, particularly by greatly strengthening the social safety net in advanced economies and – to the extent possible – in emerging markets, too. But building resilience does not mean tearing down the entire system and starting over again.2

The US has more to lose from deglobalization than some of its politicians, on both the right and the left, seem to realize. For starters, the global trading system is part of a compact whereby the US gets to be the hegemon in a world where most countries, including China, have a stake in making the international order work.

Aside from its political ramifications, deglobalization also poses economic risks to America. In particular, many of the benign factors that today allow the US government and American corporations to borrow vastly more than any other country are likely tied to the dollar’s role at the center of the system. And a wide array of economic models show that as tariffs and trade frictions increase, financial globalization decreases at least proportionately. This not only implies a sharp fall in both multinationals’ profits and stock-market wealth (which is probably fine with some), but also could mean a significant drop in foreign demand for US debt.

That would hardly be ideal at a time when the US needs to borrow massively in order to preserve social, economic, and political stability. Just as globalization has been a major driver of today’s low inflation and interest rates, shifting the process into reverse could eventually push prices and rates in the other direction, especially given what appears to be a lasting adverse supply shock from COVID-19.

Needless to say, there are other battles ahead requiring international cooperation, not least climate change. It will be even harder to motivate developing economies to rein in their carbon dioxide emissions if a global trade collapse undercuts the single strongest common incentive that countries have to maintain global peace and prosperity.

Last but not least, although COVID-19 has so far hit Europe and the US harder than it has most lower-income countries, there is still a huge risk of a humanitarian tragedy in Africa and other poorer regions. Is now really the right time to undercut these countries’ ability to fend for themselves?

Even if the US turns a blind eye to deglobalization’s effects on the rest of the world, it should remember that the current abundant demand for dollar assets depends heavily on the vast trade and financial system that some American politicians aim to shrink. If deglobalization goes too far, no country will be spared.