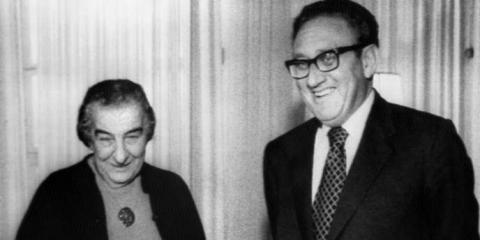 On October 11, 1973, day six of the Yom Kippur War, Henry Kissinger informed U.S. President Richard Nixon that Israel had already advanced 20 kilometers (12 miles) into Syria during its offensive on the northern front. Nixon expressed his satisfaction with the news and then added, somewhat incomprehensibly, “That is about as far … as Egypt. You have been up there haven’t you. You can look across the desert.”

A transcript of that 18:35 conversation is one of a half-dozen newly declassified texts of phone calls held by Kissinger — who at the time was both U.S. secretary of state and national security adviser — with various officials during the war. They were just posted on the website of the National Security Archive, a nongovernmental research institute.

Nixon’s odd remark may explain a blunt comment Kissinger made a half hour later in a phone call with his deputy, Brent Scowcroft. The latter had called the secretary to inquire if the president could take a phone call from the British prime minister, Edward Heath.

Kissinger responded: “Can we tell them no? When I talked to the president he was loaded.”

Nixon had good reason to be drinking: The day before, his vice president, Spiro Agnew, had resigned after pleading no contest to corruption charges. He now had to name a replacement for Agnew, and this was also a subject that came up in his chat with Kissinger. Told by Nixon that he was considering Nelson Rockefeller, John Connally, Ronald Reagan and Gerald Ford for the position, Kissinger responded that his preference was Ford, then a U.S. congressman from Michigan, because “I don’t think he is a possible candidate for president.” Nixon agreed that Ford was “safe,” and compared him to a “smart Truman.”

The next day, he nominated Ford for the job — and, of course, Ford automatically succeeded Nixon as president on August 9, 1974, after the latter was forced to resign in the wake of the Watergate scandal.

On October 6, 1973, Israel had been attacked simultaneously by both Egypt and Syria, after having been warned by its American patron not to preempt that offensive. The Americans had assumed that Israel could rebuff any such attack (in their October 11 conversation, Nixon told Kissinger the Israelis were “marvelous fighters”), and they had watched during the war’s early days as the Egyptians crossed the Suez Canal and penetrated deep into the Sinai Peninsula, which had been occupied by Israel in 1967, and as Syrian tanks had pushed deep into the Israeli-occupied Golan Heights and threatened to invade the Galilee.

William Burr, the National Security Archive senior analyst who annotated the newly posted transcripts, notes that in an October 23, 1973 secret briefing at the State Department, analyst Ray Cline commented that “we were brainwashed by the Israelis, who brainwashed themselves” in their certainty that the Arabs would not launch an attack on Israel.

Nixon’s preoccupation with domestic political crises meant that Kissinger, who had only taken over as secretary of state two weeks earlier, was left to manage many of the crises presented by the Yom Kippur War on his own.

Repeatedly in the newly released conversations, he is heard complaining about Defense Secretary James Schlesinger. Kissinger told White House Chief of Staff Alexander Haig in an October 13 call that Schlesinger’s department will “always do the one thing that doesn’t get [arms] to Israel.”

Nixon had ordered an airlift of ammunition, tanks and F4 fighter jets to Israel. However, the shipments had been delayed because of an American desire to keep the deliveries as low-key as possible so as not to anger the Arabs. This meant using third-party contractors to carry the arms and preventing direct flights to Israel from the United States. Kissinger blamed Schlesinger’s people for the foot-dragging, telling Haig that they would “dump it in the Azores, they’ll take it to the North Pole, they’ll get it to Greenland, Antarctica  — any place” but to the Israeli clients urgently in need of the materiel.

Tensions only heightened on October 17 when the oil-producing Mideast states announced their intention to lower production by 10 percent. That was followed by many of the individual states — most significantly Saudi Arabia — imposing oil embargoes on the United States.

The newly revealed documents include transcripts of conversations between Kissinger and a number of other central figures in Washington at the time: Schlesinger, Anatoly Dobrynin, the Soviet ambassador to the United States, and White House counsel Leonard Garment, who also served as an unofficial liaison between the administration and Jewish leaders.

Looked at together, they offer additional testimony of the sensitive role Kissinger played in trying to manage the conflict: Balancing the United States’ commitment to Israel’s security while being convinced that the Arabs needed to make gains in the war if they were to enter negotiations with Israel after a cease-fire; appearing to work with the Soviet Union — with which the U.S. had recently embarked on a process of détente (a lessening of Cold War tensions and increase in cooperation) — when in fact the two superpowers were principally the patrons of the opposing sides in the war.

Evidence of Kissinger’s ambivalent stance comes in the transcript of an October 18 phone conversation he had with the Soviet ambassador, in which he acknowledged: “My nightmare is a victory for either side” — that is, for either Israel or the Arabs. Dobrynin agreed with him, saying, “It is not only your nightmare.”

In the days that followed, the Americans and Soviets, both anxious to achieve a cease-fire but both dead set against seeing their client states’ strategic positions worsened at the end of the fighting, played a game of chicken that gave signs that it might escalate into nuclear war.

It was only on October 25 that a durable cease-fire was imposed. The Arab countries, despite losing all the ground they had attained in the early hours of the war, succeeded in regaining some of the pride that was so damaged in 1967’s Six-Day War. And the Israelis, though shocked and bleeding from the surprise attack, fought back ferociously and eventually pushed the Egyptians and Syrians back beyond the frontiers.

But the big winner was Henry Kissinger, who had helped create the conditions that allowed for an eventual Israeli pullback and, in 1979, a full withdrawal from Sinai and a peace treaty with Egypt.