Darca: the goals of higher education in Israel 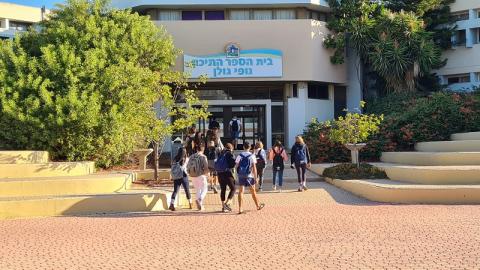 As the matriculation rate of Israeli high school students drops to 50 percent, Dr. Gil Pereg, CEO of the Darca school network warned that “this number is not sustainable for a society,” causing a stir at last month’s Jerusalem Post Conference, where he made his comments.

Pereg was referring to the low percentage of high school students in Israel who have received a bagrut certificate, which attests they have successfully passed Israel’s high school matriculation examination. Students must have this certificate to attend a university or college, and many employers make it a condition of employment.

The numbers are alarming, but Pereg said, “this is a problem that can be fixed.” As head of the Darca network of schools, which today comprises 43 schools and 24,000 students, Pereg is working to improve the quality of education in Israel, particularly in Israel’s geographic and social periphery. In a wide-ranging interview with the Magazine, he outlined the strategies behind Darca’s success and the organization’s latest strategy designed to solve the leadership crisis in Israel’s schools.

Darca was created in 2010 as an initiative of the Rashi Foundation and Alliance Kol Yisrael Haverim (KIAH), with the goal of bridging the gaps within the Israeli education system. Later, additional organizations, including the Youth Renewal Fund, the Azrieli Foundation and the Adelis Foundation joined in supporting the initiative. Pereg explained that while affluent communities such as Ra’anana, Ramat Gan, and Herzliya boast high rates of matriculation success, schools in Israel’s periphery have had a far lower rate.

“The idea behind building the Darca network,” Pereg said, “was to try to affect systemic change and to make sure that we could provide an excellent education to children no matter where they grew up, no matter what their background. We wanted to make sure that the schools that we’re going to serve in this geo-social periphery would be funded in a fair way in comparison to strong schools in affluent communities.”

“The reason is very simple,” Pereg answered. Wealthier communities supplement the per-student governmental allocation with funds from their own local resources. Additionally, he noted, parents in more affluent towns pay additional school fees to obtain more services. As a result, students in more affluent towns and cities have more educational resources at their disposal.

In contrast, communities in Israel’s periphery find it challenging to add additional resources to what the government allocates for each student. Furthermore, parents in these communities do not have the resources to pay additional amounts. Pereg added that in some schools in the periphery, the full amount allocated by the Education Ministry does not always reach the schools.

Darca set out to level the playing field by ensuring that schools in the periphery receive adequate funding. “We want to make sure that students, no matter where they live – whether it’s Kiryat Malachi or Dimona, or Yerucham – will be learning in a school which is funded in the same way, or almost the same way as a school in Ra’anana or Herzliya,” Pereg said.

Darca, through its philanthropic sources, adds additional funds to schools that do not have enough money to make up the difference. Providing sufficient funding to schools in the periphery is what Pereg termed the “first pillar” of Darca.

The second pillar of Darca’s approach, which Pereg said is the most important, is leadership. “It’s not just about adding financial resources to the school,” he said. “The most important factor in affecting positive change in school is the school’s educational leader – its principal.”

Darca identifies excellent candidates to run its schools, trains existing principals and supports them to ensure they have all they need. “Once you add this additional funding,” explained Pereg, “you need to make sure that the principal who is running the building is professional enough and has the abilities, skills, and the managerial tools that he needs in order to affect the positive change that we’re looking for.”

SINCE ITS founding 10 years ago, Darca has succeeded remarkably. The overall matriculation rate in its schools has reached 93%, and 70% of its schools have been ranked among the top schools in the country by the Education Ministry.

Pereg cited numerous examples of cities where Darca has taken over schools and transformed them. Netivot was one of the first cities where Darca began operation, and the organization currently operates five schools in the city. In 2011, according to Pereg, the bagrut passing rate was 13%.

“We brought in a new principal,” recalled Pereg, “and we changed the shape of the school, because we identified that the previous leadership was not capable of running the school.”

The school’s bagrut success rate jumped to 55% in the first year, and this past year it reached 88%. Emphasizing the importance of leadership, Pereg noted that the teachers in the school haven’t changed – only the principal was different. Pereg cited similar results in schools in Lod, Gedera, and the Druze town of Yarka, whose high school – one of the first to join the Darca network – has been ranked as the top high school in Israel for the past six years, and which boasts a 100% matriculation rate.

“When you think about the students who are going to that school from the Druze villages of the North,” said Pereg, “you actually see in front of you, the proof that once you set the target properly, once you get the vision right, and once you get a talented principal, you can become the leading school in the country.”

Wealthier communities can usually attract more talented individuals to head their schools than schools in the periphery. But interestingly, Pereg posited that there is an overall crisis of leadership throughout the Israeli school system. “We know that there is a huge shortage of talented professionals to run schools, because the job has changed dramatically in the last two decades.” Pereg added that this crisis of educational leadership is not limited to Israel, but exists throughout the world.

“The job of principal is itself much more complicated. This is why we’re seeing a shortage of talented people holding this position,” Pereg said, adding that many principals leave the position soon after taking the job. Research has shown that in the West, approximately 40% of principals leave after just three years. In Israel, Pereg noted, 25% are leaving their post after just two years.

Illustrating the pivotal role that principals play in the functioning of their schools, Pereg mentioned that the most talented educational leaders were able to successfully guide their schools during COVID. “I saw how principals – excellent leaders of schools – were the most important factor in the way the schools were operating. In places with professional leaders running the schools, they knew how to navigate through the fog, even though governments all around the world were very confused how to handle things, and regulations were changing on a daily basis.”

Pereg said that one reason principals leave is because they must handle different and conflicting stakeholders. In addition to working with students and teachers, principals today must deal with parents, teachers unions, the media, and politicians, and as a result, said Pereg, “the principal is torn in different directions.”

This, together with the evolution of technology and social media, creates a transparent environment for the principal, in which every decision is scrutinized by a variety of different groups, which are not always working toward the same goal.

“It puts a lot of pressure on school administrators and principals,” Pereg said, “because they need to provide an excellent education in a situation in which they’re very vulnerable, and at times also powerless.”

DARCA NOW wants to take its vision of training talented principals to Israel’s entire educational system through its new Educational Leadership Accelerator, sponsored by the Azrieli Foundation. In Darca’s view, principals need to be more than gifted educators and pedagogical experts. They need to be equipped with the traits of company CEOs in order to succeed.

Citing statistics that there is a shortage of 1,700 principals in the Israeli school system, Darca wants to create a new discourse within Israeli society about the role and importance of school principals. Pereg cited the popular saying, hatovim latayis (the best become pilots). “We want to say now that the best and the brightest of our children really should aspire to become principals, because this is the future of our country. The purpose of the accelerator is to do exactly that – to attract talented individuals.”

The Educational Leadership Accelerator program will be launched this year, and 30 candidates have been accepted for the first class. Darca plans to have 50 students in next year’s program and 70 students in the third year, so that 150 prospective high school principals will have been trained after three years. Pereg added that although the program’s initial focus is on the training of high school principals, the eventual plan is to add training for elementary school heads as well.

Darca will be training prospective principals using its own schools as laboratories. Each candidate will be assigned to an existing Darca principal who will serve as a mentor to work with them for the year. They will shadow the Darca principals in their work and learn how they run their schools effectively. The Educational Leadership Accelerator program will combine Zoom and one-on-one visits to schools.

Pereg said that students in the program will also travel abroad to learn best practices from other schools outside Israel. “We don’t think that all knowledge exists here, and we should definitely learn with others and share with others what we have learned.” Darca is aiming high with its Educational Leadership Accelerator program, and hopes that 90 percent of its graduates will become principals within the next five years.

The organization has benefited from the presence of leading business luminaries on the Darca board, such as Jimmy Pinto, founder of the Israeli subsidiary of the Rothschild Banking Group; Danna Azrieli, chairwoman of the Azrieli Group; Marc Rowan, CEO of Apollo Global Management; and Sam Katz, founder of TZP Group, all of whom have not only contributed financially to its success, but have provided the needed business acumen and keen advice that have helped make it successful.

Pinto, chairman of the Darca board, said that the Leadership Accelerator program is a way for Darca to help the entire educational system in Israel. “Our goal is to influence the entire system now, and not just our network,” he noted. “The issue of the quality of the management of the schools is very important. We trust that this program for principals that we have just recently launched will have a major impact in that respect.”

He added that Darca hopes to have greater involvement in schools in the haredi and Arab sectors in the coming years. “They’re both part of the periphery of Israel in a way, and the country cannot afford not to have them participate in higher education and in the development that is expected.”

As Darca begins its second decade of operation, it hopes, through its Educational Leadership Accelerator, to spread the magic of its success to schools throughout Israel. “The ‘secret sauce’ begins with leadership,” said Pereg, “and I think leadership starts with setting expectations and aiming high.”