Curiosities of the National Library of Israel available on the internet 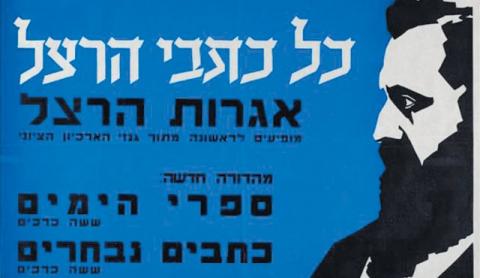 Hundreds of vintage book advertisements, printed all over Israel between the 1930s and the 1950s, are now available online thanks to a new National Library of Israel project.

Once upon a time - before they invented Facebook, "four for NIS 100" and Amazon - publishers needed to print special posters to promote their latest books. The Land of Israel Publishers, for example, announced its book "Between Man and Wife" with a poster that described the publication as "a popular science book on the sexual problem, from the spiritual psychological perspective." The book "supplied life counseling for young couples [and] unified scientific philosophic material."

A scanned book advertisement. Courtesy of the National Library.

The publisher promised "78 packed pages, and a price of only Land of Israel 100 pence." At the bottom of the advertisement was the advice: "Buy the book immediately for every married man and woman." Lots of posters were printed all over the country between the 1930s and the 1950s. They gave the public the chance to examine well-known - and less known - books, and tell us much about how books were sold in that era. They also teach us a lot about the world of advertising back then.

The National Library of Israel started scanning its collection of posters and adverts last year and is making them available to the public online. The posters are not only about books. They also include those from the other art forms and activities that document day-to-day life in Israel.

This week, in honor of the Jerusalem International Book Fair that opened on Sunday and runs through Friday, the National Library is highlighting its poster collection, part of the its Voyage through Time Project.

Browsing through the collection is a nostalgic journey: "Tell your relative, acquaintances and customers in Israel and overseas about 'The Guide to the Land of Israel,'" proclaims a poster from March 19, 1931. "The purpose of the guide is to bring the tourist from the ends of the earth to the Land of Israel," it states. The name of the author of the text also appears on the poster: S. Tchernopolsky of 59 Hayarkon Street in Tel Aviv. "Sign up for Sifriat Hapoalim [Workers Library]. Worker, intellectual, young man - the Workers Library is your library," was how the Hapoalim publisher sought subscribers.

Another Hapoalim poster informed the public about a special party the publisher held on March 15, 1946: "A party with Lea Goldberg," the famous poet and writer, in honor of her new book.

"Herzl's works are a must in every Hebrew household," Tel Aviv's M. Newman Publishing announced when it advertised its new edition of the Zionist leader's selected works.

One of the exceptional posters in the collection advertised the Hebrew edition containing excerpts of the "Brown Book," with "details of the Hitlerian rule of terror," from Herut Publishing on Shenkin Street in Tel Aviv. The original was first published in 1933 in Warsaw by the World Society for the Relief of the Victims of German Fascism and was translated into Hebrew the same year. Today you can find the book in secondhand bookstores.

"Soldier, have you bought the first book on the War of Independence really written on the battlefield?" is an advertisement for Uri Avnery's book "In the Fields of the Philistines, 1948 - a Soldier's Tale." "Thousands have bought it - buy it too," the ad urges.