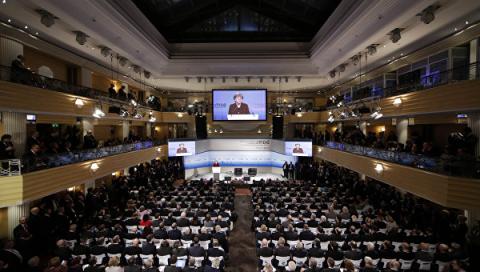 The war in Syria, the disintegration of Libya and the open points of the Minsk Protocol were three of the topics at the top of the agenda of the 52nd Munich Security Conference. The participants discussed the many current wars and conflicts and examined the weaknesses of today’s international order. In his speech, Foreign Minister Steinmeier called for the refugee crisis to spur Germany on to be even more determinedly involved in international affairs.

The Munich Security Conference (MSC), an especially significant annual political meeting, has been a forum for the global dialogue on security policy for more than 50 years. Numerous heads of state and government, politicians from foreign affairs and defence, and business people and journalists from around the world also attended the 2016 conference. The Federal Government was represented by Foreign Minister Frank-Walter Steinmeier, the Head of the Federal Chancellery Peter Altmaier and Development Minister Gerd Müller. Defense Minister Ursula von der Leyen opened the conference together with her French counterpart Jean‑Yves Le Drian.

“We also need to recognize unwelcome realities. But what counts is that we do not accept them.” In his speech to the Munich Security Conference on Saturday, February 13, the German Foreign Minister addressed Germany’s increased responsibility and his concept of “intelligent” foreign policy. The refugee crisis should spur Germany on to be more involved in international affairs, Steinmeier said in Munich.

Political conflict-resolution processes were at the heart of Germany’s involvement in the world’s trouble spots, he said. Moreover, he expressed his hope that the Munich commitments agreed to by the Syria Support Group on Thursday night would help to kick‑start a conflict-resolution process. Steinmeier said the following with regard to the role played by the regional powers Iran and Saudi Arabia: “A country’s true strength has to be measured by its willingness and ability to assume responsibility not only for its own security, but also beyond its own borders in the region.”

Chaired by Former Ambassador Wolfgang Ischinger, the conference participants discussed international crises and conflicts as well as the security policy challenges of the future. The key topics of the MSC 2016 included Europe’s approach to the refugee crisis, the war in Syria and the future of Europe’s security architecture. Stability in Sub-Saharan Africa, arms control in cyberspace and the threats to worldwide stability and security posed by epidemics were also on the agenda.

Ukraine: Meeting in the Normandy Format

A meeting in what is known as the Normandy Format focusing on the Ukraine conflict and the implementation of the Minsk Protocol was held on Saturday morning: Together with France, Foreign Minister Steinmeier had brought together the Foreign Ministers of Russia and Ukraine. After the meeting, he said the following: “The outstanding issues are easy to state, but they remain hard to resolve, as became clear again at our meeting here in Munich today.”

It was agreed that, prior to its next meeting, the Trilateral Contact Group and the Organization for Security and Co-operation in Europe (OSCE) would submit concrete proposals on how to improve adherence to the ceasefire, prepare for the local elections in eastern Ukraine and ensure security at the elections. The German Foreign Minister called on those involved to keep up their efforts to urge the parties to the conflict to take further steps. “In this context, Minsk remains the road map and the line of approach.”

Libya: The time for manoeuvrings is over

A further meeting at the Security Conference focused on the most recent developments in Libya. Foreign Minister Steinmeier had invited participants to attend an international meeting together with his US counterpart John Kerry. UN Special Representative Martin Kobler briefed the participating Foreign Ministers on the latest state of affairs. He said that the international community’s expectations had been spelled out once again in talks with the Libyan president of parliament Agila.

The Foreign Minister made it clear that the time for manoeuvrings was over. “This is the time to show responsibility for Libya”, he said. “All sides must help ensure that the government of national unity can take up work as soon as possible and embark on the difficult job of restoring state order in Libya, driving out the ISIS terrorists and enabling the people once again to live in peace and stability”, he continued.

The Munich Security Conference is also an excellent occasion for convening bilateral meetings on the fringes of the conference. Alongside the major meeting formats, Foreign Minister Steinmeier also completed a genuine marathon of talks and met a great number of counterparts and heads of state and government for more in-depth discussions.

Moreover, Steinmeier and his new French counterpart Jean-Marc Ayrault took the MSC as an opportunity for their first cordial meeting on Saturday.

Steinmeier also scheduled one-on-one meetings with his counterparts Kerry, Lavrov and Klimkin. His meeting with South Korea’s Foreign Minister Yun Byung-se focused on coordinating the response to North Korea’s policy and on the two countries’ shared concern over Pyongyang’s most recent provocations. Topics high up on the agenda with Azerbaijan’s President Aliyev included OSCE matters, the Nagorno-Karabakh conflict and energy issues. In talks with the President of the Kurdistan-Iraq region Masoud Barzani, Steinmeier expressed his serious concerns regarding the announcement of a Kurdish referendum on independence. The German Foreign Minister also met NATO Secretary General Jens Stoltenberg for an open exchange of views.

Furthermore, numerous events took place at the Munich Security Conference on a range of foreign and security policy issues, including disarmament, cyber security and protection against epidemics.