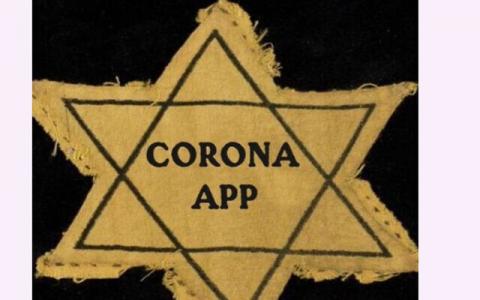 A report published Tuesday by a Tel Aviv research group found that the coronavirus pandemic has become a vehicle for an intense and exceptional wave of anti-Semitism and anti-Zionist propaganda that accuses Jews and Israel of either causing the virus or standing to benefit from it.

The pandemic has “unleashed a unique worldwide wave of antisemitism,” researchers at the Kantor Center at Tel Aviv University said. “The new wave of antisemitism includes a range of libels that have one common element: The Jews, the Zionists and/or the state of Israel are to blame for the pandemic and/or stand to gain from it,” they wrote.

The researchers also pointed to anti-Semitic sentiments by those who see the virus as divine punishment of Jews and to Holocaust imagery used by those protesting lockdown restrictions.

The study is the latest to point to an increase in anti-Semitism as the virus has overshadowed nearly all aspects of life across the globe, with Jews blamed for creating the virus or for refusing to heed social distancing and hygiene guidelines. A recent Oxford University study found that 19.1 percent of the public in Britain believes to some degree that Jews caused the coronavirus pandemic.

In April, the Kantor Center raised the alarm over a rise of anti-Semitism tied to the virus as it released a report on anti-Jewish incidents over 2019. The report released Tuesday was based on anecdotal evidence of anti-Jewish sentiments expressed in public forums around the world.

Jews are not alone in feeling rising hate. Researchers have noted increases in xenophobia as countries close their borders along with conspiracy theories, some pushed by the US administration, that blame China for the spread of the virus. But the authors of the study noted that the anti-Semitism on display was reiterative of existing anti-Jewish tropes throughout the centuries, reflective of “a high level of anxiety and fear in many populations.”

“This new type of antisemitism, which partly reiterates classic antisemitic themes, includes conspiracy theories alongside medieval blood libels, now renewed in a 21st century format,” the study reads. “These common motifs perpetuate antisemitic accusations from previous generations and other global catastrophes, once again presenting the well-known image of the Jew,” wrote Prof. Dina Porat, head of the Kantor Center, in a statement.

The authors of the report said the evidence was based on examples of anti-Semitic material flagged by a network of researchers around the world, which was then collated and analyzed by the center.

According to the report, the material is spread mostly by right-wing extremists, ultra-conservative Christians and Islamists. A significant volume of the anti-Semitism comes from the US and Middle Eastern countries such as Iran and Turkey as well as the Palestinian Authority.

US white supremacists and ultra-conservative Christians blame Jews, and in particular the ultra-Orthodox community, for the virus as they are seen as disregarding lockdown and hygiene rules aimed at curbing the spread.

In the Middle East, it is Israel, Zionism and the Mossad intelligence service that get the blame. A modern interpretation of the hoax “Protocols of the Elders of Zion” has Jews seen as spreading the virus to undermine economies and society and intending to make a profit while preparing a vaccine and drug treatment.

Israel and the IDF are also routinely accused of deliberately spreading the virus among Palestinians, especially prisoners held by Israel. The report noted that so far only one person has died of COVID-19 in the Palestinian Authority and the Gaza Strip.

Iranian and Turkish conspiracy theorists claim Zionists and the US released the virus with aim of killing thousands of Muslims. Another Muslim interpretation is that the disease is a punishment from God for non-believers. In South America, anti-Semitic and anti-Zionist virus propaganda is spread on Spanish-speaking television channels, the report said.

Another aspect of the virus-related anti-Semitism is in distorting terminology that associates it with the Holocaust.

“Restrictions enforced as part of anti-pandemic policies are compared to policies of the Nazi regime: Lockdown is likened to the ghettos and release from it to the German slogan Arbeit Macht Frei [work liberates] which appeared at the entrance to Auschwitz,” the researches wrote.

“The word ‘unvaccinated’ replaces ‘Jew’ on the yellow star worn by demonstrators protesting against vaccination policies, suggesting that those who have not been vaccinated are like Jews persecuted in Nazi Germany, and that those who disagree with vaccination opponents see them as disease spreaders – like the Jews,” the report continued.

The phenomenon of using the yellow star in anti-lockdown protest became so widespread its use was banned in Munich. The phrase “Holocough,” combining Holocaust with cough, has been spread on social media, the report found.

The recent killing of George Floyd in Minneapolis while in police custody has also been incorporated into anti-Israel discourse, with activists claiming that US police forces are racist and brutal because they receive training from the Israel Police. African Americans are also depicted as having a shared fate with Palestinians.

“Universal disasters have been attributed to the Jews and to Israel before, giving rise to antisemitic discourse — such as conspiracy theories blaming Israel for 9/11, or false reports accusing Israeli soldiers of harvesting organs from the bodies of dead Palestinians,” wrote researcher Giovanni Quer. “The current wave of antisemitism is unprecedented, however, because, spreading very swiftly through the social media, it focused at first on the COVID-19 crisis and then quickly moved on because of social and political changes.

“Just a few days passed between the coronavirus crisis and the racism-related social crisis in the US, but antisemitic discourse remained just as fierce, with its proponents simply adapting their antisemitic narratives to the changing social contexts,” he wrote.